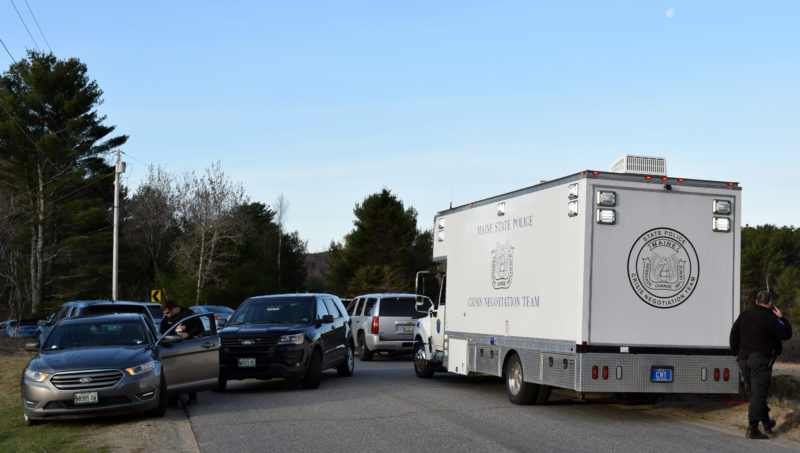 A Boothbay man faces felony charges of criminal threatening with a dangerous weapon and terrorizing with a dangerous weapon after allegedly shooting at a home and vehicle in Edgecomb and later barricading himself in his home while another house on his property burned, then surrendering to the Maine State Police Tactical Team, all between about 10 p.m., Friday, April 14 and 8 a.m., Saturday, April 15.

Investigators from multiple agencies continue to untangle the series of events.

Michael Holbrook, 46, is being held without bail at Two Bridges Regional Jail in Wiscasset, according to jail personnel. He was scheduled to appear in court Wednesday, April 19.

Lincoln County sheriff’s deputies responded to a home on Old County Road in Edgecomb at about 10 p.m. Friday after a resident reported being threatened with a firearm, according to Lincoln County Sheriff’s Office Chief Deputy Rand Maker. When deputies arrived, the suspect had left the scene.

“As the investigation unfolded through the overnight hours, it took several twists and turns while the suspect was still at large,” Maker said in a press release.

Holbrook threatened to harm himself and returned to the Old County Road home, where he  allegedly shot at the home and a vehicle with what police believe was a hunting rifle, according to Maker. There were people in the home at the time, although Maker did not know how many or whether any children were present. At least one car was hit.

The house at 214 Pension Ridge Road in Boothbay burned and Holbrook fled to a building he owns next door, at 3 Hooker Way, where he later surrendered to the tactical team after Maine State Police negotiators talked him out of the building, according to Maker.

Police believe Holbrook had been living at the 3 Hooker Way house.

The fire departments were not able to fight the fire due to the standoff, and the house was destroyed.

A firefighter douses the remains of a building on Pension Ridge Road in Boothbay the morning of Saturday, April 15. (J.W. Oliver photo)

Firefighters were just beginning to fight the fire, with two trucks in the driveway and a couple of hose lines on the flames, when police told them to clear the area, according to Boothbay Fire Chief Dick Spofford. “We didn’t know the situation when we arrived,” he said.

Based on events earlier in the evening, Maker said, “it just wasn’t safe for them to stay in place and fight that fire, so we asked them to pull out and they did.” 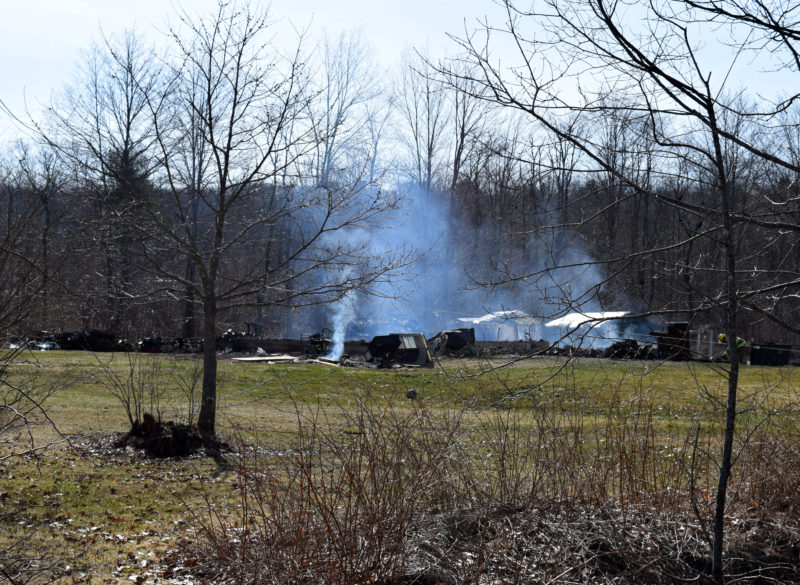 The remains of a building smolder on Pension Ridge Road in Boothbay the morning of Saturday, April 15. (J.W. Oliver photo)

The firefighters left the trucks running, not knowing it would be several hours before they could return. The fire did not damage the trucks, however. “We were lucky,” Spofford said. “They were far enough away so the heat didn’t bother them.”

The rest of the local fire fleet had staged at the top of a nearby hill on Pension Ridge Road, and later returned to the Boothbay Fire Department to wait for the go-ahead to fight the fire. It was frustrating for the firefighters to watch the building burn, Spofford said.

After Holbrook surrendered to police, firefighters were able to return around 8 a.m.

By that time, “most of it was burned down into the basement,” Spofford said. It took firefighters about an hour to extinguish the remains of the house.

Police do not know if the fire was intentionally set, according to Lincoln County Sheriff Todd Brackett. The Maine State Fire Marshal’s Office is investigating the fire. An update on the status of its investigation was not available by press time.

The investigation, into both the fire and the other events of Friday and Saturday, remains “very active,” Maker said. The Lincoln County District Attorney’s Office will review the results of the investigation, and more charges are possible.

Pension Ridge Road was closed early Saturday in the area of the fire, with police cruisers blocking the road at its intersection with Hardwick Road.