A fire in a barn spread to a nearby house on Borland Hill Road in Nobleboro in the early hours of Wednesday, Jan. 11. 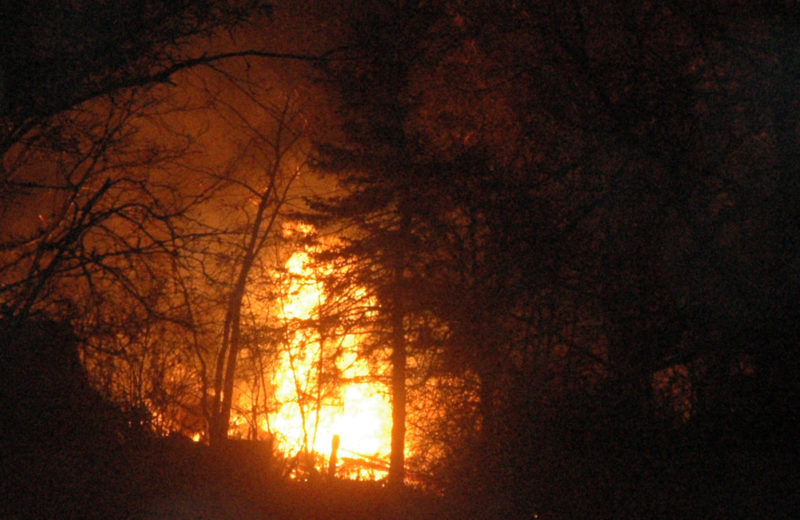 A barn fire broke out in Nobleboro shortly before 12:30 a.m., Wednesday, Jan. 11. The blaze spread to a nearby house, causing heavy damage to the adjacent building. (Alexander Violo photo)

According to Nobleboro Fire Chief Ryan Gallagher, the barn was fully involved when he arrived on scene.

He said the fire spread to a house roughly 30 feet away from the barn, causing heavy damage to the home. The barn was reduced to rubble. Gallagher said the home could likely be deemed a total loss as well.

Gallagher said the occupants, an elderly couple, of the house on the corner of Bayview and Borland Hill roads were able to get out, were checked out on scene, and are staying with a neighbor.

Gallagher said crews focused their efforts on fighting the fire at the home, letting the barn burn out. He said firefighters made both interior and exterior attacks as they worked to extinguish the flames at the house.

Gallagher said one firefighter was treated at the scene for exhaustion but did not require transport to a hospital.

The chief said a power line on Borland Hill came down. Central Maine Power Co. was called to the scene to cut the power.

The Maine State Fire Marshal’s Office is investigating the cause of the fire.

Gallagher said an excavator was brought in to help clear debris.

Joining Nobleboro at the scene were the Bremen, Bristol, Damariscotta, Jefferson, Newcastle, and Waldoboro fire departments, in addition to deputies from the Lincoln County Sheriff’s Office.

Fire crews were still on scene at 3 a.m.