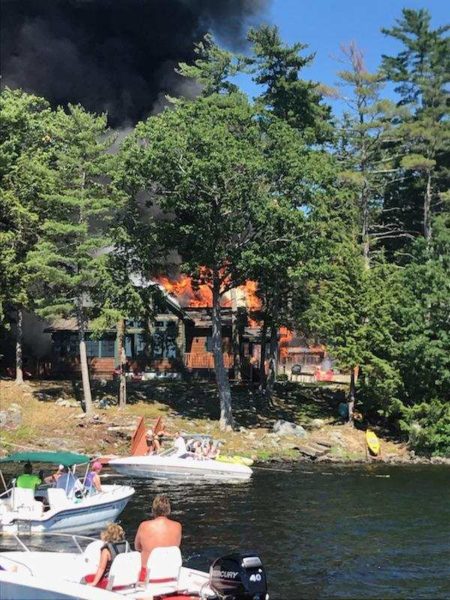 Boaters watch as flames and smoke rise from a house on Wildwood Shores Road in Nobleboro on Friday, July 20. (Photo courtesy Karen McCarrick)

A fire at 190 Wildwood Shores Road, on Damariscotta Lake in Nobleboro, destroyed a garage and badly damaged a nearby house the afternoon of Friday, July 20.

The fire started in the garage and spread to the house, according to Jefferson Fire Chief Walter Morris, who was initially in command at the scene.

The residents were in the house when the fire started in the garage, according to Nobleboro Fire Chief Ryan Gallagher. No one was hurt in the fire.

Bruce Harris owns the property, which Gallagher described as a year-round home.

By the time fire trucks arrived, the garage had collapsed, Morris said. Firefighters focused their initial efforts on an interior attack in the house.

Morris said fire crews were able to extinguish the flames inside the house.

Firefighting efforts were complicated by the location of the fire, on the lakeshore roughly a mile down a dead-end dirt road off Morang Cove Road.

“It is a very narrow road and made for a tough response,” Morris said.

Without access to a dry hydrant, firefighters ran 60 feet of suction line from an engine to draw water from the lake and used a portable pump to supply water from a dock on the lake, according to Gallagher.

Morris spoke highly of all the departments responding to the scene.

“The first crews did an excellent job. They undertook a very aggressive attack and stopped the fire from spreading further,” he said.

The Lincoln County Communications Center dispatched firefighters shortly before 3 p.m. By 4:30 p.m., the fire was under control, limited to the remnants of the garage, according to Morris.

A Jefferson tanker and Nobleboro engine were the first trucks to arrive, according to Morris.

Morris said a member of the Jefferson Fire Department, Gregory Johnston, was working in the area when the fire was reported. Johnston responded directly to the scene and shut off a propane tank on the property when he arrived, enabling the prompt attack of the blaze.

Gallagher said the house sustained significant damage, but the homeowner’s insurance provider would decide whether to declare it a total loss. The homeowner did have insurance, he said. 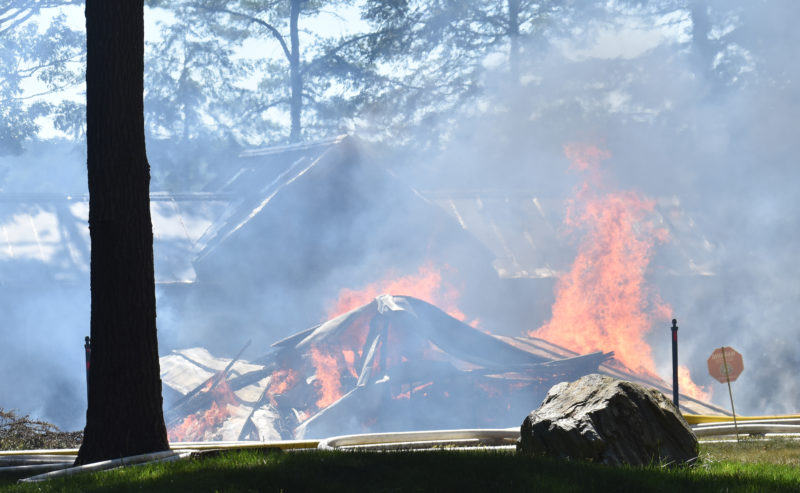 The fire started in the garage, collapsing the structure and spreading to a nearby house, according to Jefferson Fire Chief Walter Morris. (Alexander Violo photo)

The Maine State Fire Marshal’s Office investigated at the scene the morning of Monday, July 23, but could not determine the cause of the fire due to the extent of damage, according to Gallagher.

Also responding were the Central Lincoln County Ambulance Service and Lincoln County Sheriff’s Office, as well as Central Maine Power Co., which shut off power at the property. 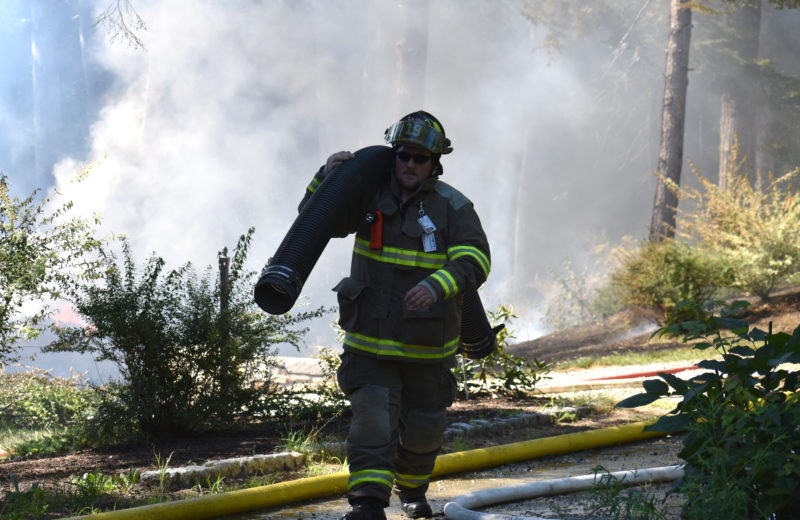 A firefighter on the scene of a structure fire at 190 Wildwood Shores Road in Nobleboro the afternoon of Friday, July 20. (Alexander Violo photo)