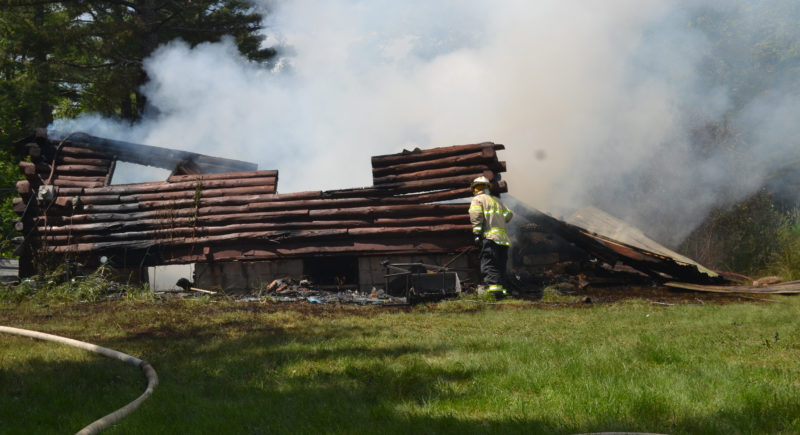 Two Wiscasset residents were displaced by a fire that destroyed their Bradford Road home the afternoon of Wednesday, June 28. (Abigail Adams photo)

Fire destroyed a home at 313 Bradford Road in Wiscasset the afternoon of Wednesday, June 28, displacing the home’s two residents.

Due to the extent of the damage, the Maine State Fire Marshal’s Office was not able to determine the cause, Wiscasset Fire Chief T.J. Merry said.

Dan Colby and his 15-year-old son were the sole occupants of the log-style house, but no one was home at the time of the fire, Merry said. The house was insured through the mortgage holder, he said.

The American Red Cross is assisting Colby and his son to “ensure they have food, a safe place to sleep, and other essentials,” according to a press release from the organization.

There were reports of an explosion when the fire was reported at about 1 p.m., Wiscasset Police Chief Jeffrey Lange said. There was a large quantity of ammunition in the house, and rounds were going off when emergency responders first arrived, Lange said.

The roof was collapsing into the basement when firefighters arrived, Merry said. “The fire had such a head start on us, there wasn’t a lot we could do,” he said.

Firefighters formed exterior attack teams to extinguish the flames, but initially had to keep some distance from the house due to the ammunition, Merry said. 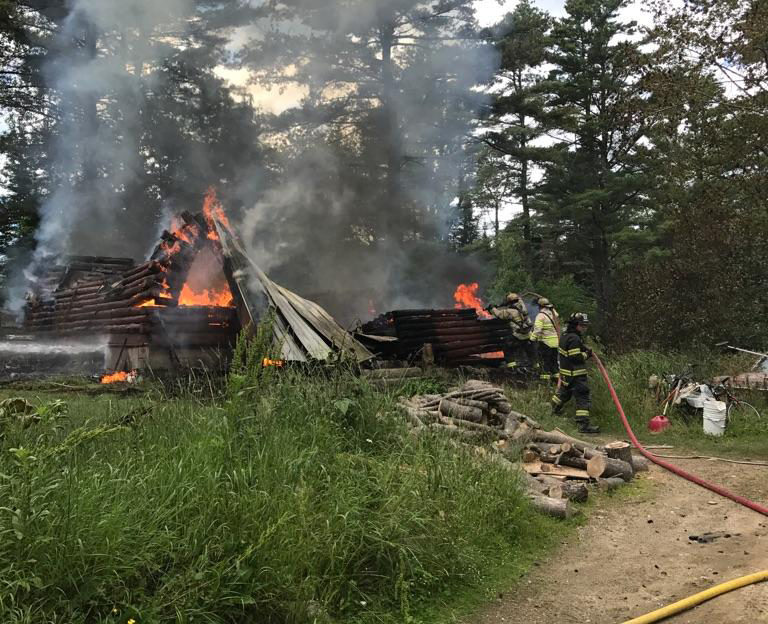 The strong turnout of volunteer firefighters on a weekday afternoon was a surprise, Merry said. “For that time of day, to have that much manpower was great,” he said. “I thought we were going to be shorthanded, but we had a lot of great help.”

The Wiscasset Fire Department was assisted at the scene by the Alna, Dresden, Westport Island, and Woolwich fire departments. The Newcastle Fire Department provided station coverage for Wiscasset.

The Wiscasset Ambulance Service and Wiscasset Police Department also responded. There were no injuries as a result of the fire or the firefighting effort, Merry said.

The house was at the end of a long gravel driveway, but firefighters were able to run hose lines and draw water from a dry hydrant at the Monstweag Dam, next to the driveway entrance on Bradford Road, Merry said.

The dam provided a critical water supply that assisted in the firefighting effort, Merry said. “If it wasn’t for the dam, we would have had to go miles away from the scene for a water supply,” he said.

The area of Bradford Road around the fire was closed as firefighters worked to extinguish the flames and overhaul the building. The initial firefighting effort took about three hours, Merry said.

Two floors collapsed into the basement and the house contained a lot of combustible material, which caused the rekindles, Merry said. The fire “was a stubborn one,” he said. “With everything compacted in the basement, it doesn’t take much for it to flare back up.”

Merry returned later Thursday evening and the fire appeared to be extinguished, although the fire department will continue to monitor the site, he said. With all combustibles contained in the concrete structure of the basement, there is no concern of a potential rekindle spreading, he said.

“This was an unfortunate circumstance,” Merry said. “Someone lost their house. The one positive is that no one was hurt.”