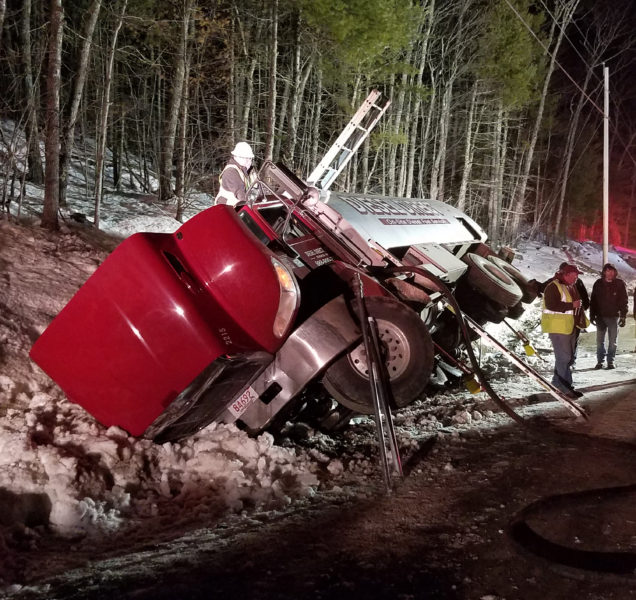 Jefferson Fire and Rescue responds to a rollover of a commercial fuel tanker on South Clary Road late Thursday, March 15. According to Jefferson Fire Chief Walter Morris, an estimated 800 gallons of diesel fuel spilled as a result of the accident. (Photo courtesy Walter Morris)

Numerous emergency agencies and private companies responded to the scene.

According to Jefferson Fire Chief Walter Morris, the single-vehicle crash occurred in the area of 618 South Clary Road (Route 215). The delivery truck came to rest on its side. 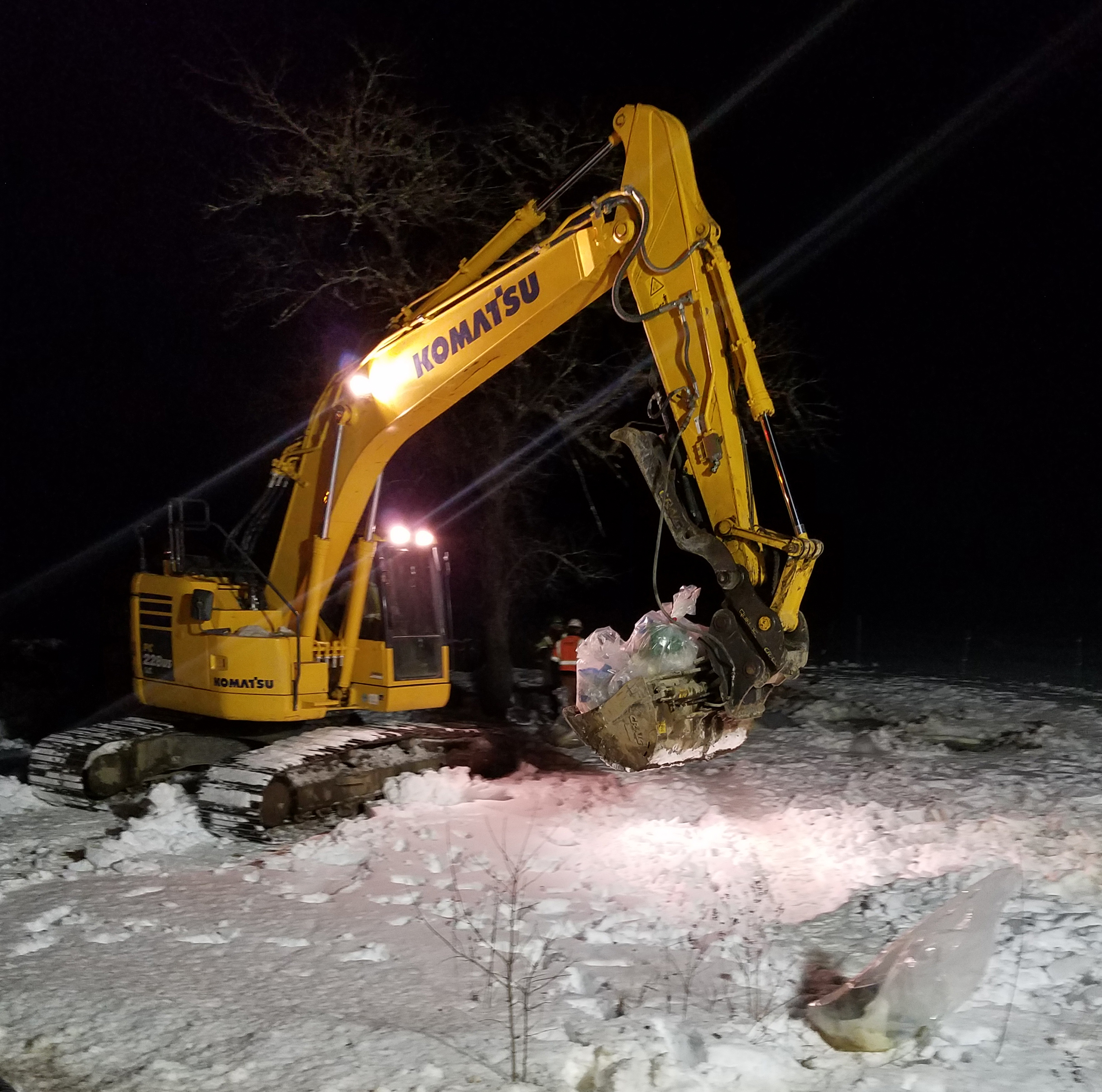 An excavator assists in cleanup operations at the site of a diesel spill on South Clary Road in Jefferson. The Maine Department of Environmental Protection is directing an extensive cleanup and remediation effort, according to Jefferson Fire Chief Walter Morris. (Photo courtesy Walter Morris)

Nicholas Stuart, 28, of Westbrook, was driving the truck south when a tire caught in the soft shoulder and he couldn’t recover, according to Lincoln County Sheriff’s Office Lt. Brendan Kane. Stuart was transported to LincolnHealth’s Miles Campus with non-life-threatening injuries.

In an email, Morris said Jefferson Fire and Rescue was dispatched for a report of a rollover involving a diesel-powered pickup truck with diesel fuel leaking from the vehicle.

Capt. Chris Rigaud was the first on scene and reported that the vehicle was not a pickup truck, but a fuel delivery truck. He requested that Jefferson First Responders respond to evaluate the driver, according to Morris. 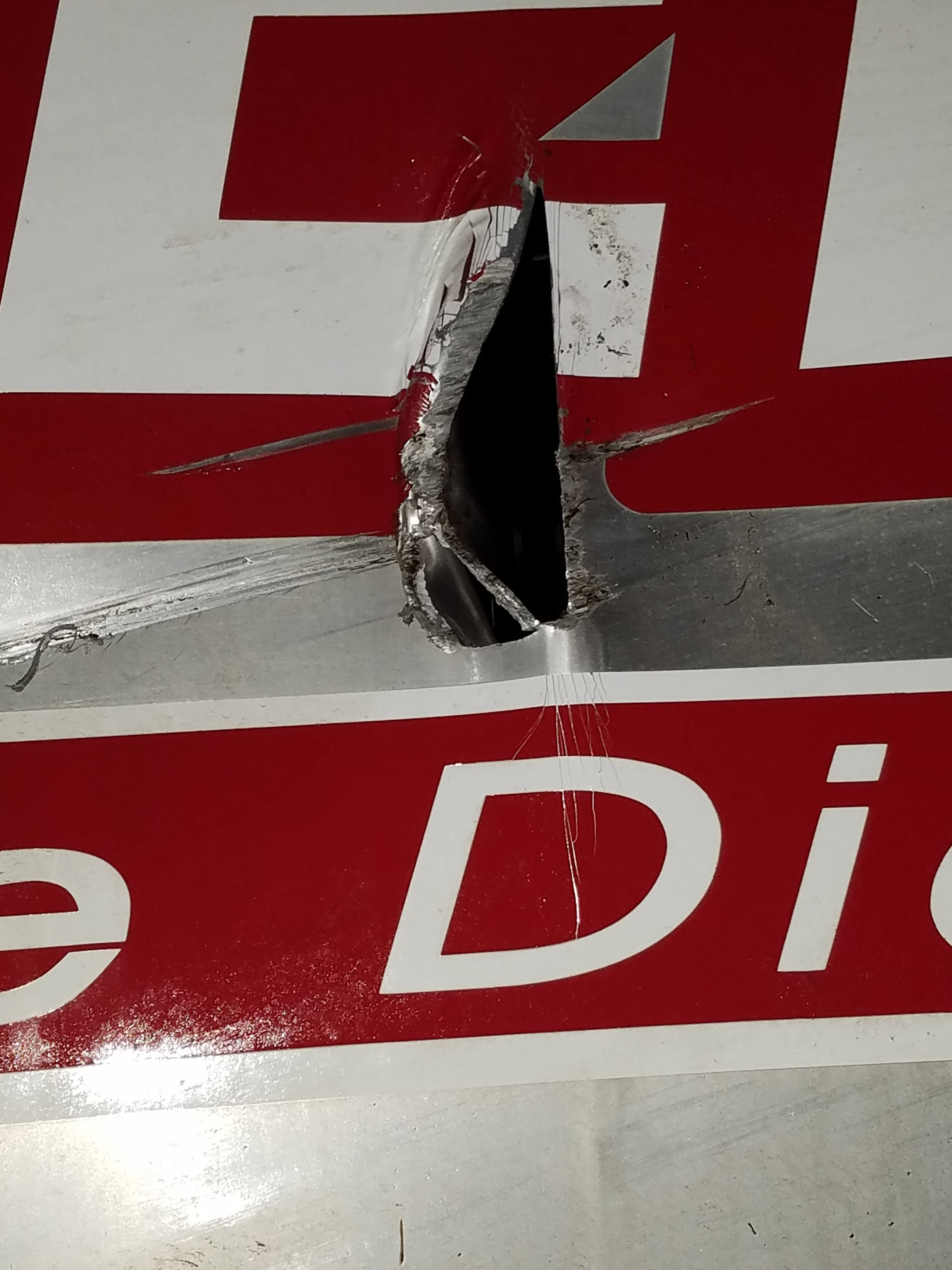 A hole in the side of a fuel tanker after a single-vehicle crash in Jefferson. An estimated 3,400 gallons of diesel leaked from the vehicle, according to Jefferson Fire Chief Walter Morris. (Photo courtesy Walter Morris)

Morris said 14 Jefferson firefighters and first responders responded, utilizing three fire engines and a rescue vehicle to care for the driver, stabilize the vehicle, establish safe operation zones, and prevent the spread of the leaking fuel. Due to the location of the accident, fire vehicles also responded from the department’s south station.

Morris said initial actions to contain the diesel spill included the use of booms, pads, plywood, and dirt to construct barriers in an effort to minimize the spread of fuel through culverts and other areas in the vicinity of the crash.

“We contained it the best we could. (The Maine Department of Environmental Protection) is doing cleanup and remediation,” Morris said.

Bart Newhouse, of the DEP’s Remediation and Waste Management Bureau, estimated the spill at 800 gallons.

The estimate is based on the truck’s capacity of 4,400 gallons, how much it had delivered, and how much was pumped at the scene.

“The driver made a delivery right before the accident and we pumped 2,400 gallons from the truck. About 800 gallons is unaccounted for, between the delivery and what we pumped out,” Newhouse said.

Newhouse said an excavator was used to recover contaminants from the snow and soil in the area of the accident.

“We will monitor things as the weather warms up and there will probably be some monitoring of nearby wells,” Newhouse said.

Morris said the truck was owned by Diesel Direct, a diesel fuel supplier based in Stoughton, Mass.

According to Morris, Deputy Fire Chief Darin Walker oversaw operations and coordinated the response of other agencies to the scene.

(Correction: Due to an error in information provided to The Lincoln County News, an earlier version of this post reported that an estimated 3,400 gallons of diesel fuel spilled. The spill is estimated to have been 800 gallons.)