The Maine Department of Health and Human Services checked on Kendall Chick just once in about three years between her placement with her grandfather and his fiancee and the girl’s death in December 2017.

Stephen Hood, Chick’s paternal grandfather, testified to the single check-in during the fourth day of his fiancee’s bench trial at the Capital Judicial Center in Augusta on Friday, April 5. 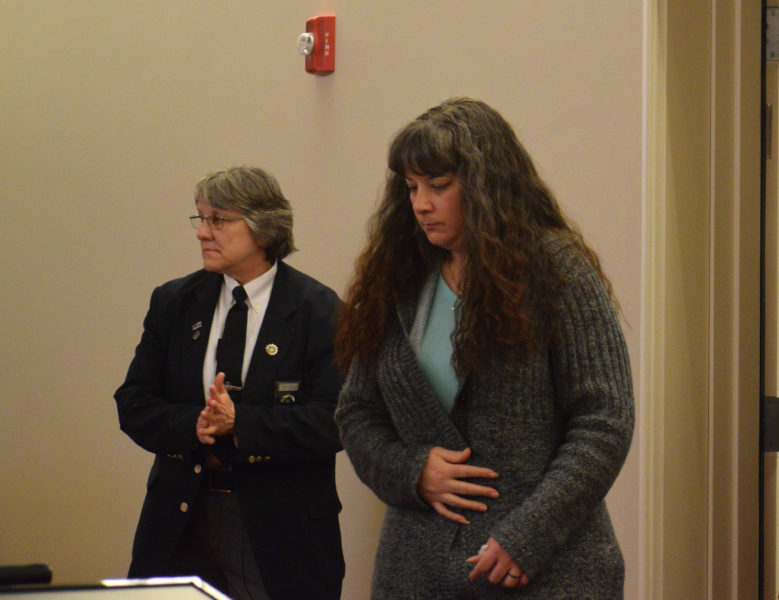 Shawna L. Gatto (right) enters the courtroom on the fourth day of her trial at the Capital Judicial Center in Augusta, Friday, April 5. (Jessica Clifford photo)

DHHS removed Chick from the care of her biological parents due to addiction issues and placed her with Hood and Gatto, both of whom were in recovery from opioid addiction.

Chick lived with Hood and Gatto, her primary caregiver, at 19 Crickets Lane in Wiscasset until her death Dec. 8, 2017. She was 4 years old.

The trial began Monday, April 1. When the trial comes to a close, Maine Superior Court Justice William R. Stokes will determine the verdict, as Gatto waived her right to a jury trial in August 2018.

After beginning his testimony Wednesday, April 3, Hood returned to the stand when the trial resumed Friday after a one-day break.

Hood finished answering questions from the prosecution, represented by Assistant Attorneys General Donald Macomber and John Alsop. Then Gatto’s defense team, attorneys Jeremy Pratt and Philip Cohen, cross-examined him about the couple’s decision not to seek medical treatment for Chick for injuries prior to her death.

“You were worried about taking (Chick) to the doctor’s as well as Shawna, correct?” Cohen said.

“You were worried about taking her out in public and people seeing her, correct?”

“You were also somewhat concerned calling 911 that night as well, weren’t you?” Cohen said, referring to the night of her death.

Afterward, Cohen asked if Hood believed he would become a suspect after Chick’s death. Hood agreed that he did.

In a phone call to Gatto played earlier in the trial, Hood said, “they’ll come after the (expletive) with the bad record.”

Cohen listed nearly 10 previous charges against Hood, from 1987-2002, with most “violent in nature.”

Some nights, after Hood worked all day at Bath Iron Works, he would be alone with Chick and Gatto’s grandchildren when she would go out to run errands for two to four hours. However, most of the time, in addition to Chick, Gatto had “near-exclusive control” of her grandchildren — a 4-year-old and an infant.

“So, in essence, as far as being alone with Kendall, you had the same opportunities that Ms. Gatto had to inflict injury on her,” Cohen said.

Gatto and Hood have been together 13 years. In that time, Hood said, he never saw Gatto abuse any of her children or grandchildren. There were no bruises found on Gatto’s grandchildren.

With their children grown up, the two would have become “empty nesters,” Cohen said. Hood agreed he was looking forward to it.

Of Chick coming into the home, Hood said, “Shawna was more for it than I was.”

“Call DHHS and see what they say. If they think she needs special care and can place her, fine, they can take her,” Hood said in a text to Gatto.

Another text he sent to Gatto two days before Chick died read: “I don’t know what to do, get rid of her? How? If we did, then we would have to carry the guilt. She needs to change because we don’t have a life together. It sucks. I love you and we have to make it the way we want it. Nothing changes if nothing changes.”

Hood said he would become angry when he had to watch the children late at night because he woke up early for work.

Cohen asked if DHHS only checked on Chick once after her placement three years prior. Hood agreed.

“In those years, you must have basically come to believe that DHHS isn’t coming, they’re not going to check in, they are not going to look,” Cohen said.

On Wednesday, April 3, the third day of the trial, Hood said there was one incident when he struck Chick three times with a belt. He said it was because Chick soiled her pants.

Gatto “was upset with me for not disciplining the children,” Hood said.

“I felt like crap, and I texted Shawna the next day and told her ‘I’m never doing that again, because I do not want her afraid of me,'” Hood said.

During redirect by the prosecution, Hood spoke about his feelings on bringing his granddaughter to a doctor.

He both wanted and did not want to bring Chick to a doctor. He wanted to because he was concerned about swelling from an injury on her head, but he was nervous to bring her because he knew he would “have some explaining to do” about her bruises.

Alsop asked Hood if he believes all the bruises Chick had were due to accidents.

“That’s what I’ve been holding onto,” Hood said.

After testifying, Hood left the courtroom without staying to listen to the remainder of the day’s events.

Maine State Police Detective Joshua Birmingham, the lead investigator for the case, was recalled as a witness for the state.

Another two-hour video recording of an interview between the detective and Gatto was shown.

At the beginning of the second interview, which took place Dec. 10 — two days after Chick’s death — Birmingham told Gatto, “You’re not under arrest. You’re going home tonight.” He read her Miranda rights and she decided to stay for the interview.

In the interview, Gatto said she never received Chick’s medical records from DHHS.

Gatto ran through what happened on the day Chick died and injuries to Chick.

“Prior to that she had other head traumas,” Gatto said, referring to an injury Chick still had bruises from when she died.

“Whacking the — a lot — sometimes I didn’t see, but this has been going on, like, bumping her head and all that, for, I want to say, the last maybe two months,” Gatto said. “She has been one big ball of trauma.”

A few minutes later, Gatto added, “Almost on a daily basis she would fall down … I know it sounds sad, but you kind of got used to the falling all the time.”

In the interview, Birmingham mentioned how hectic Gatto’s life seemed, spending her days with two toddlers and an infant. “It’s not a day at the beach for you,” he said.

In response, Gatto said, “Yes, it’s hectic … but I’m not at the point that I’m going to beat the crap out of one of my grandkids. I love them, dearly. I think that’s where you’re trying to go with this.”

During cross-examination of Birmingham, Pratt asked why the detective eliminated Hood as a suspect.

“He had very little to do with the children … he was not the primary caregiver for them. He was at work almost all day, every day. Even when he was at home, he was still working. Quite frankly, I found him to be believable.”

Before calling recess for the day, the prosecution noted that Hood had testified that his granddaughter visited one of the couple’s recovery doctors.

The state rested its case Friday afternoon. The defense will take over when the trial resumes Monday morning.