Meaghan and Ross Nichols sell produce and other products from High Hopes Farm at their farm stand. (Maia Zewert photo)

Meaghan said she has been interested in gardening and caring for animals for most of her life, but never considered it to be farming. As time went on, she began reducing her hours as a nurse and spending more time in the garden and with animals.

“Every year it’s gotten bigger,” Meaghan said. “People have said, ‘Oh, it must be a lot of work,’ but it doesn’t feel like work for me. It’s a lot of fun.”

Meaghan and Ross were aware the 120-acre farm, formerly Donald and Eunice Sigler’s, was for sale. The late Siglers had farmed the land for many years, Meaghan said. 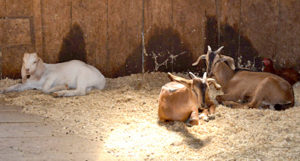 The couple originally didn’t think a move would be possible, but decided to visit the property after looking at photos of the land online. Meaghan said they knew almost immediately it was something they wanted to pursue.

“We knew the house would need some work, but we figured the house can be repaired,” Meaghan said. “The location and the amount of history of this land and in the barn, that’s not something you can find everywhere.”

After visiting the property last fall, Meaghan and Ross worked with the Maine Farmland Trust, Land for Good, and the Maine Organic Farmers and Gardeners Association to prepare for the new endeavor. The couple also worked with The First for financing.

The farm is named after Meaghan’s grandmother, Hope.

When she retired, Hope named her retirement home High Hopes, because it was on a hill overlooking open farmland. Hope passed away a year ago.

When Ross and Meaghan were commuting to Portland or Unity for a class for commercial farmers, it reminded Meaghan of going to see her grandmother in Dover-Foxcroft, and the couple decided to call their farm High Hopes Farm.

The Nichols closed on the property May 27 and began moving the animals, vegetables, and some of the small buildings from their 3.4-acre property down the road to High Hopes Farm.

“We’re doing what we were doing, now we just have the space to do it on a larger scale,” Meaghan said.

Currently, the farm is home to chickens, turkeys, ducks, goats, and pigs. Meaghan said they plan to add sheep at some point.

The animals are housed in temporary pens in the barn or on the 120-acre property. Some of the pigs are in a temporary enclosure with an electric fence, and will soon be able to roam the property.

“It’s good to start all the animals out in the barn, where you can control the temperature and the humidity, before they move outside and we put them inside the electric fence so they can get used to that,” Meaghan said. “Once they master the fence, then they are set loose in the woods. It’ll be fun to get to see them be pigs.”

In addition to the animals, Ross and Meaghan also grow a garden that spans almost a half-acre of the property. The couple grows a variety of produce, including tomatoes, squash, herbs, peppers, spinach, radishes, potatoes, onions, and a variety of beans.

“We’re doing what we did at our other property, but on a much bigger scale,” Meaghan said.

The couple sells products from the farm at their farm stand on the property. Meaghan said pre-ordering is available, and visitors are encouraged to come up and see their animals.

“We invite everyone to come up and see what we’re doing,” Meaghan said. “We believe people should see our farm, where their food came from, and be close to their farmer, who worked hard to grow it.”

Meaghan said reactions to the farm have been very positive.

“Everyone’s been really thrilled and excited to know that this is still a farm and will stay one,” Meaghan said. “Fifty years from now, when they’re driving over the hill, it will still look like this.”

The stand is open daily. If no one is at the stand, customers are encouraged to call Meaghan’s cellphone or honk.

“If the open flag is out and I’m not there, I’m up taking care of the animals,” Meaghan said.

For more information, stop by the stand or email highhopesfarm@tidewater.net.