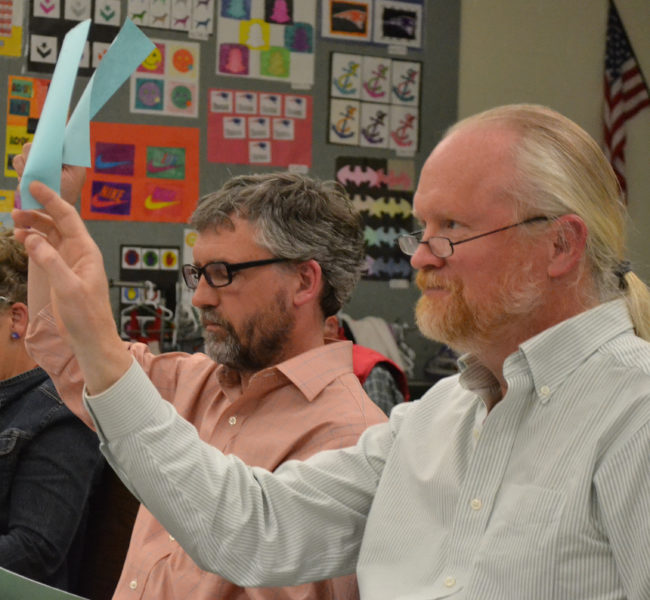 Rob Nelson votes for the Newcastle secondary education budget May 10. The Lincoln Academy Board of Trustees voted to remove Nelson from the board June 12. (Maia Zewert photo)

The Lincoln Academy Board of Trustees removed one of its members June 12. Since his removal, former Trustee Rob Nelson and the board have issued conflicting statements about the school’s financial health.

“The Lincoln Academy Board of Trustees reluctantly voted on June 12 to remove Robert Nelson,” President Chrissy Wajer said in a statement released Monday, June 19 in response to inquiries from The Lincoln County News.

“The Board’s decision came after repeated efforts by the Board to work with Mr. Nelson to address specific expectations that all Board members agree to as a condition of service on the Board,” Wajer said.

Wajer said Nelson declined to meet with her to discuss those expectations, though Nelson said he met with Wajer and board Vice President Sarah Maurer once before declining further meetings.

“With Mr. Nelson declining to meet with Board leadership, and unwilling to resign, the Board determined that it had no choice but to remove him from the Board in the best interest of Lincoln Academy,” Wajer said. “Although the Board regrets that this could not be avoided, the Board is thankful to Mr. Nelson for the contributions and service that he has provided to Lincoln Academy.”

Nelson, of Newcastle, joined the board four years ago. He was its treasurer from June 2016 until this spring, when he resigned as treasurer but remained on the board. He chaired the school’s strategic planning steering committee and sat on head of school search committees in 2006 and 2012, and the campaign committee for the Cable-Burns Applied Technology and Engineering Center.

Nelson read a statement to the board during the June 12 meeting about both his dedication to the school and his concern about the school’s finances, he said in a phone interview Monday, June 19.

After the trustees voted to remove him from the board, Nelson sent the statement to the school’s honorary trustees and, after removing an attachment containing financial details, to others in the community, he said.

During his time as treasurer, Nelson worked on an analysis of the school’s finances over the last five years. The analysis shows a “deterioration in LA’s finances,” he said.

Over the past five years, the academy has exceeded its annual budgets by approximately $1.14 million, according to the analysis, including $965,000 in the past three years.

The school’s endowment has grown by nearly 50 percent in the last five years, but its debt is eight times what it was five years ago.

Nelson and LA Head of School David Sturdevant differed on details regarding the creation of the analysis, but the school did not dispute the figures.

The data in the slides match annual independent audit reports from Runyon Kersteen Ouellette, a South Portland-based auditing firm, as well as the school’s Form 990, a tax form nonprofits file with the IRS. Those documents are available to the public.

“There wasn’t a lot of alarm” when the analysis was presented to the board, Nelson said.

“The most concerning thing for me personally has been the spending beyond the budget,” he said. “When you set a budget, that’s what you can spend. Even if you have more revenue, you don’t go past your budget.”

In her statement, Wajer said Lincoln Academy has a “strong financial outlook.”

In addition, LA has invested in its educational programs, including with the construction of the $2.7 million Cable-Burns Applied Technology and Engineering Center.

“Additional debt is not an indication of financial weakness, but instead is a demonstration of Lincoln Academy’s investment in its facilities to ensure the Academy’s continued growth and success,” Wajer said in her statement.

While annual expenses have increased in recent years due to the payments on this debt, “the Board is continuing to take responsible steps to ensure that its finances remain strong,” Wajer said, including with an effort to refinance its debt with low-interest, tax-exempt bonds.

Lincoln Academy is pursuing a bond partnership with Newcastle in which the town would act as a sponsor, or issuer, of a $10 million bond.

The school would use the funds to refinance debt from its purchase of property at 4 Hillcrest Road in Newcastle, the construction and renovation of the dormitories, and the construction of the LA Alumni Dining Commons, according to a document drafted by the school’s bond counsel.

The bond partnership is projected to reduce debt service by $1.2 million over the 25-year term of the financing.

Wajer said the school is projected to end the current fiscal year with a surplus and is on track to meet budget targets for next year. In addition, the growth of the school’s endowment has allowed the board to increase scholarships for students to $97,000 this year, she said.

Despite Nelson’s concerns about the school’s finances and uncertainty around enrollment, the board voted this spring to adopt “an irresponsible budget” that relies on a “large increase in enrollment” for the upcoming school year, Nelson said in his statement. Shortly after the board adopted the budget, he resigned as treasurer.

After his resignation as treasurer, Nelson met with Wajer and Maurer to discuss their concerns regarding his support for Sturdevant, according to his statement. Nelson said he was told he was “not supportive enough” of the head of school.

In his statement, Nelson said one of the critical components to LA’s well-being is the partnership between the board and the head of school.

“The board needs to support the Head, but also to hold the Head accountable,” Nelson said in his statement. “The board is responsible for evaluating the performance of the Head, yet accepts information about the status and operations of the school solely from the Head. This creates an untenable situation – we cannot evaluate someone based solely on what they tell us.”

Nelson said he declined further meetings with Wajer. “I have repeatedly told her that if there are issues to address, they should be addressed with the full board present,” he said in his statement.

The board removed Nelson on June 12. Nelson said board bylaws require a two-thirds vote to remove a trustee, but neither LA nor Nelson would disclose the exact count.

“Ensuring that Lincoln Academy continues to be strong, viable, and vibrant for years to come is central to the Board’s mission,” Wajer said. “Although continued growth and change necessarily involve challenges, the Board is determined to meet these challenges thoughtfully and responsibly as we continue to work to position Lincoln Academy for a bright and exciting future.”

Nelson reaffirmed his allegiance to the institution of Lincoln Academy in both his statement and a phone interview.

“I’m going to be fine. It’s what is happening to the school that I’m concerned with,” he said.