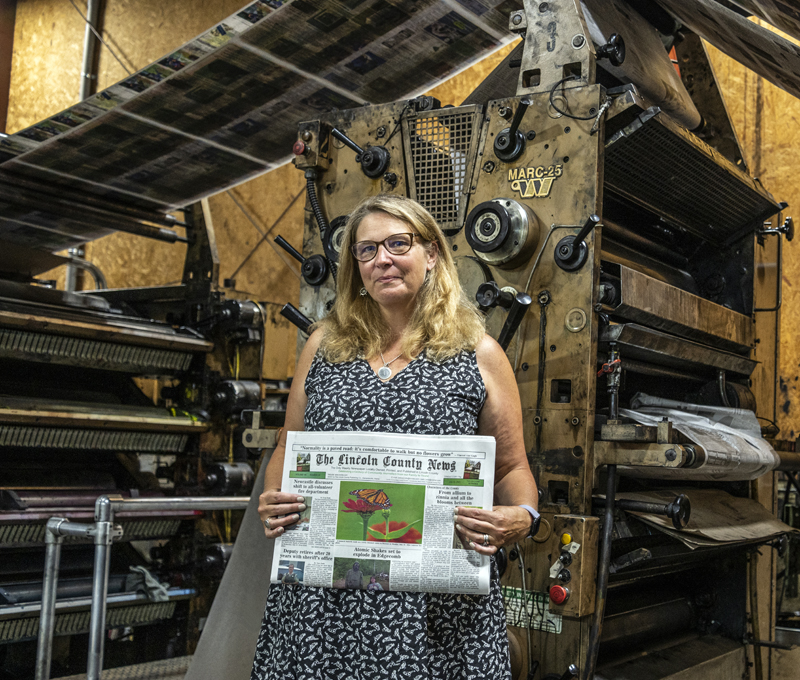 Raye S. Leonard, the new editor of The Lincoln County News, holds an edition of the paper in front of the newspaper presses at Lincoln County Publishing Co. in Newcastle. (Bisi Cameron Yee photo)

For just the 10th time since the Erskine-Roberts family assumed ownership in 1920, a new editor will guide The Lincoln County News in its weekly effort to inform, educate, interest and entertain its readership.

Although Raye S. Leonard’s tenure at LCN begins with the current edition, she has worked as a Maine community journalist for almost 20 years.

“We are excited to have Raye join the team here at The Lincoln County News,” said John Roberts, associate publisher. “Her experience with community journalism and enthusiasm for local coverage make her a great fit. We are confident that Lincoln County will be well served by Raye’s leadership in the newsroom.”

Leonard didn’t intend to make news her life, but it happened anyway. A 2006 graduate of the University of Southern Maine’s Stonecoast M.F.A. program with a concentration in creative nonfiction, Leonard started freelancing for regional newspapers and magazines to augment work as an adjunct instructor of English in Maine’s community college system.

Since then, Leonard has worked in nearly all facets of newspaper and periodical production at several publications, including those of reporter, photographer, content development, website management, copy editor, paginator, graphic designer, and editor of features, entertainment and other special sections.

Most recently she worked for five years at the weekly Coastal Journal, covering Greater Bath and Brunswick, as well as Lincoln County, first as assistant editor and then as editor and general manager.

Under Leonard’s care and planning, the weekly paper celebrated its 50th anniversary in 2016. In 2017 and 2018, the Coastal Journal won 13 Maine Press Association awards in the annual Better Newspaper Contest.

“My time in the adult ed field makes me appreciate the work of newspapers even more than I did,” Leonard said. “A community newspaper committed to telling the news and stories of the people and organizations it serves is the foundation of all adult education. It’s a central hub of information, municipal governmental oversight, directions to the nearest benefit bean supper and not only who won the pie baking contests, but the recipes, too.”

Despite all the many ways it is delivered these days, Leonard frequently asserts that a newspaper’s core responsibility has not changed all that much since Benjamin Franklin first published the Pennsylvania Gazette in 1728: Informing its readers and, by turns, asking often tough questions and providing thoughtful answers.

Given the current, continuing decline of newspapers on a national basis, as well as a harsh and seemingly binary political climate that often loudly blames the messenger rather than considering the message, Leonard believes there has never been a more important time for reporters, photojournalists, editors and publishers to be good at their respective jobs.

“I am excited to join The Lincoln County News,” Leonard said. “I appreciate the Roberts family’s commitment to community journalism and look forward to building relationships with readers that build on the newspaper’s trust and good will.”

Although born in Limestone when her father was stationed at Loring Air Force Base in 1970, Leonard is a Midcoast Maine lifer. She grew up in Woolwich, and graduated from Morse in 1989. High school and college summers were spent waitressing in Boothbay Harbor. It took 13 years for her to earn a B.A. due to adventure opportunities that could not wait, but in 2002 Leonard graduated from Vermont College with a concentration in creative writing and a degree in liberal studies.

Thirteen generations prior to her own arrival, Leonard’s ancestors carved out lives and sheltered families amid the ledges, forests and reaches of Dresden, Westport Island, Edgecomb, Boothbay and Newcastle.

“I’ve always felt a deep connection to Lincoln County,” Leonard said. “My grandmother —and all my great-grandmothers going back to 1732 — grew up in the Boothbay region. My grandparents met after World War II back when Montsweag was a dance hall. They were married in Newcastle and my mother was born in Damariscotta.”

During a trip by car or boat, she can — and will — point out ancestral homes and properties from one peninsula to the next, and relate anecdotes passed by oral history, written account or extracted from hours of dusty research in courthouses and registries of deeds.

All are sources of innate pride, yet they are echoes of the stories still waiting to be told.

Leonard lives in Bath with her (mostly) grown sons, husband, a bonus son and daughter, and a big gray cat called Muffin. She is the sitting city councilor for Ward 4, where she grows flowers, practices yoga, reads books, concocts new recipes and improves old ones, and knits hats (but only in the winter).