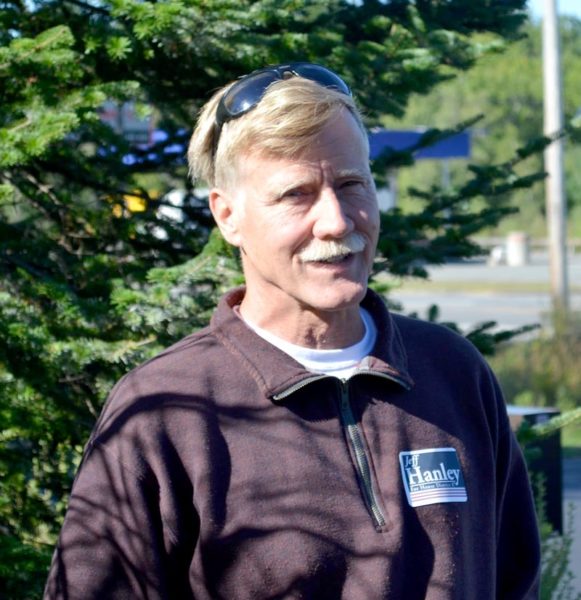 Maine House District 87 Rep. Jeff Hanley, R-Pittston, believes the State House should run like your house. “Fix the roof and the driveway … don’t overspend … save for the future” is his campaign slogan in his bid for re-election to a second term as the representative for Wiscasset, Alna, Pittston, and Randolph.

The approach to government is based on constitutional principles and common sense, Hanley said. Hanley is a lifelong Maine resident, a small-business owner, and a blue-collar worker, he said. Raised in Gardiner, he has lived in Pittston for 24 years.

He has worked as an electrician, a pipe fitter, and a welder; owns Blue Ice Self Storage in Pittston; and is a veteran of the Maine National Guard.

“I know what it’s like to work with your hands and your back to earn a living and raise a family in Maine,” Hanley said. “I bring that to the State House.”

Hanley has four children and nine grandchildren, and is committed to making Maine a pleasant and affordable place to live and raise a family, he said. For Hanley, the way to accomplish that is to reduce the role of government.

“We need government, but we don’t need that much of it,” Hanley said.

Exorbitant taxes and burdensome regulations are strangling the Maine economy, Hanley said. Government has placed these burdens on citizens, Hanley said, and he would like to see them removed.

Hanley has a long history of involvement in community organizations. He has worked as a volunteer at Gardiner’s food bank and the Maine State Prison, and is a member of the Knights of Columbus and St. Joseph’s Parish in Gardiner.

His re-election campaign has garnered the endorsement of the National Rifle Association, the Sportsman’s Alliance of Maine, the Maine Association of Realtors, and the Maine Credit Union League.

While he has always been politically involved, Hanley’s 2014 run for the Legislature was his first foray into state politics. “It was a great eye-opener,” Hanley said. The process of running the state is complex, but also simple, he said.

Thousands of bills are introduced to the Legislature, but many of them are not necessary and do not help anybody, Hanley said. Some legislation passed after the budget was complete required state funds, he said. “They were empty bills,” Hanley said. “There was no funding behind them.”

For all the publicity about conflicts between the governor and the Legislature and Democrats and Republicans, Hanley said he has a good relationship with his colleagues in the State House.

“Oddly enough, we agree on about 70 percent of the issues,” he said. “10 to 15 percent we have to discuss and negotiate. There’s a very small percent that (Democrats and Republicans) totally disagree on,” he said.

Hanley is a conservative and votes along conservative lines, he said. He supports many of Gov. Paul LePage’s policies, especially when it comes to taxation.

Hanley can remember when the income tax was first introduced in Maine in the late 1960s. “It was only supposed to be temporary,” he said. The Legislature was able to reduce the income tax a small amount in the last legislative session.

“They called it a big one. I’ll call it a big one when it’s gone,” Hanley said. With its current taxes and regulations, Maine is not competitive with New Hampshire, he said. The cost of opening a gas station in Maine is significantly more expensive than in New Hampshire due to fees imposed by the state, he said.

According to the requirements, qualifying renewable electricity must be generated by a facility no greater than 100 megawatts.

“I’d like to see that done away with,” Hanley said.

Hanley was opposed to LD 1649, “An Act to Modernize Maine’s Solar Power Policy.”

“It was nothing but a tax on people that weren’t (solar energy) producers,” Hanley said. “I’m all for wind and solar,” but not at an increased cost for other consumers, he said.

Hanley is also opposed to Medicaid expansion, which will place the state “right back where we were, in debt,” Hanley said, even with the federal reimbursement that was not available when Maine previously expanded Medicaid services.

“Those reimbursements will change and eventually disappear,” Hanley said. The expansion would also only benefit able-bodied adults, he said.

The opioid epidemic is an enormous issue in Maine, one that Hanley would like to see addressed with harsh penalties for traffickers and mandatory treatment for users.

A bill that was previously defeated in the Legislature would make possession of heroin a felony unless the individual sought treatment, in which case the felony would be dropped, Hanley said. He expects the bill to be reintroduced, and, if elected, he will once again support it.

Hanley also plans to reintroduce a bill to the Legislature that would ban the use of calcium chloride to treat highways in favor of a better alternative. Calcium chloride is wrecking cars, which hits low-income and retired people the hardest, Hanley said. “It’s double taxation on citizens,” he said.

Hanley will continue to support legislation that reduces taxes and regulations as well, he said.

“It’s a pleasure serving and I hope to do it again,” Hanley said. “I want to listen to people. I’m trying to look out for the average citizen.”