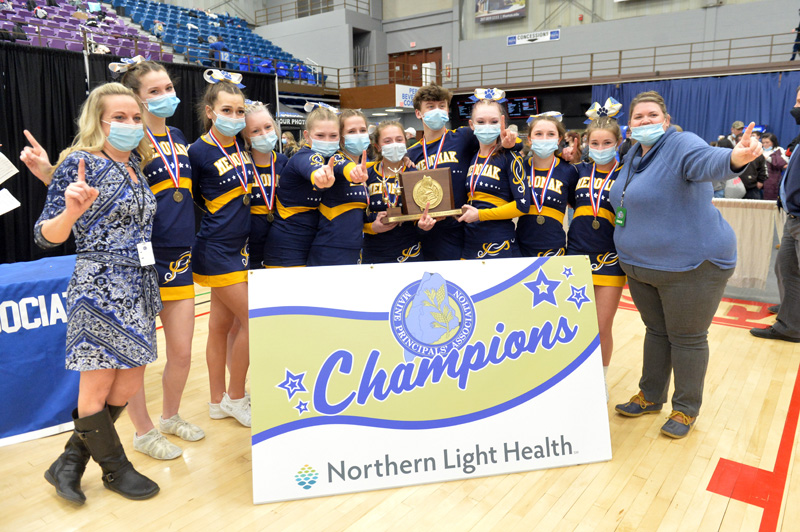 Medomak scored 85.6 points to beat out reigning champs Hermon by 6.7 points. Since 2007, Herman has won 11 state championship titles. The Panther squad rocked it on Saturday with a near perfect routine to knock the Hawks off their golden pedestal.

When Hermon was announced South Class B runner-up, Medomak coaches Heather Simmons and Rachel Coor hugged, then erupted in tears of joy that streamed down their faces. Their emotions were too great to control, and neither tried, with the realization that their team just brought home Medomak Valley’s first ever state cheering championship.

The state title win was a long time coming for the coaching duo, who both attended Medomak Valley. They started coaching together at Medomak in the 2008-2009 season. But their journey together started before that, at Sumner High School, and later Rockland District High School.

“I just felt like it was a dream come true. It was complete validation for 13-plus years I have been involved in coaching,” Simmons said.

“It is hard to put in words, we were completely overwhelmed. For the past 14 years we thought it was a possibility. We thought we had earned it or worked hard enough for it. We had the right ingredients, but it was not our time. When it finally happened, it was overwhelming,” Assistant Coach Rachel Coor said.

Simmons said her Panther squad “could not have done anymore. Dealing with the pandemic, quarantines, injuries, and strep throat.”

Simmons missed 20 days of practice due to COVID-19, so Coor coached via Skype from her home in Arizona.

While Coor coached from over 2,500 miles away, a parent and former volunteer coach supervised practices.

“She basically held the phone, and my voice came through on Bluetooth. Heather was so sick. We just made it work,” Coor said.

“I had a five-year advantage before COVID with Skyping, so when COVID hit and we had to do remotely, the kids had already been doing it for six or seven years. We knew it could work with me behind a computer screen from a different time zone. The kids knew it would work, too, because they had been doing the Zoom thing with me for a long time,” Coor said.

“Something must have gone right, because the first day Heather came back, she had tears in her eyes she was so happy with their progress,” Coor added.

“To be able to stay together as a group and listen to someone who is not your head coach, a parent, could have been a disaster,” Coor said.

Medomak persevered through all the ups and downs of the season and stayed united.

“At the end of the day, those kids are talented and exceptional athletes, with great work ethics,” Coor said of Medomak unity that led to gold.

“It has been crazy. It has been a lot this year. To pull it off was a miracle,” Simmons said.

“Every year we hope the stars align. We put a good quality product out there. We knew this year, that this team had all the pieces. We just needed to execute and we did,” Simmons said.

Senior Lizzi Swan missed much of the year with a separated shoulder, including the Kennebec Valley Athletic Conference and regional championships. She got the clearance to compete at 100% on Feb. 10, two days before states.

Although Swan was not able to participate in her original role at base, she was able to contribute to the Panthers’ routine with her tumbling skills.

February 10 was the first time this season that the entire Medomak team was able to practice together.

“That is truly unheard of. This team is no stranger to re-working things at the last minute,” Simmons said.

In the past three years, Medomak has lost cheerleaders in the days leading up to states, one with a broken hand, others with broken legs.

“This team is capable of adjusting, and they had to at every competition. All the pieces fell together at the state championships,” Simmons said.

Medomak’s high school programs “always benefit when they have a strong peewee program. Those kids came from a very successful Warren peewee program and we reaped the benefits. They have put the hard work in over the years. Our program is successful because the youth and junior high coaches get them ready,” Simmons said.

“This group of seniors has been together for a long time, since third and fourth grade. We have been watching this group of kids and thinking if there is ever going to be a year, this was it. But we also thought that about other teams,” Coor said.

“Rachel and I do a good job pushing those kids. We know what level they need to be at, to be perennial contenders. They put work in and that pays off 99% of the time,” Simmons said.

Medomak Valley has been knocking on the door of a state championship since 2011 when they won their first regional title. They have won 11 straight regional championships and 12 KVAC titles since 2011.

“There are not enough words that I can think of … My heart is happy. I have dreamt about it for a long time. I am just so grateful,” Simmons added.

For Coor, this was the fourth state championship team she coached. She led Rockland to a state title in 2003, and won state titles in Denver, Co., in 2005 and 2007.

Of bringing a state title home to Medomak and her home town, Coor said, “I am just really proud. I am speechless. There are so many people that have played a massive role. Our very first team, I remember telling them we may not win states this year, but we will someday and you will be a part of it,” Coor said.

Simmons and Coor have heard from a lot of their former cheerleaders since winning gold.

“They are so proud to be alumni,” Coor said.

“I don’t know if they realize the significance of winning a state championship. It is really special. They will always remember it,” she added.