A single-wide mobile home at 45 Orff Road in Jefferson burned down early New Year’s Day. The sole resident was not home.

James Beverage, of Jefferson, owns the home, according to Jefferson Fire Chief Walter Morris. Beverage’s son lives in the home. Morris was not sure of the son’s name.

A friend of the son’s who lives in a camper on the property was awakened and noticed the fire, according to Morris. The Lincoln County Communications Center dispatched firefighters at 2:20 a.m.

“In his effort to try to look around and make sure it wasn’t occupied, the witness did get some smoke, ash, and debris in his eyes, so he was treated on the scene by Waldoboro EMS and was eventually transported to the hospital,” Morris said. He did not have the friend’s name or know where he was taken.

The cause of the fire has not been determined, Morris said. The first firefighters on scene saw a kerosene heater at the entrance to the home.

Road conditions complicated the response to the home on a gravel road.  “At the time the fire started there was still a wet, heavy snow and the roads were hazardous because they had not been treated at that point,” Morris said.

Firefighters cleared the scene at about 5 a.m., Morris said. 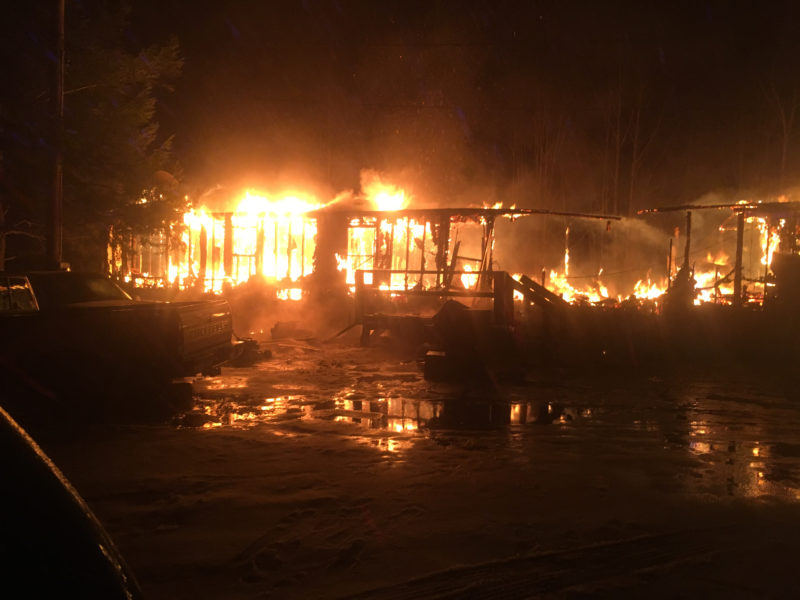 A mobile home burns at 45 Orff Road in Jefferson early New Year’s Day. The resident was not home at the time of the fire. (Photo courtesy Walter Morris)