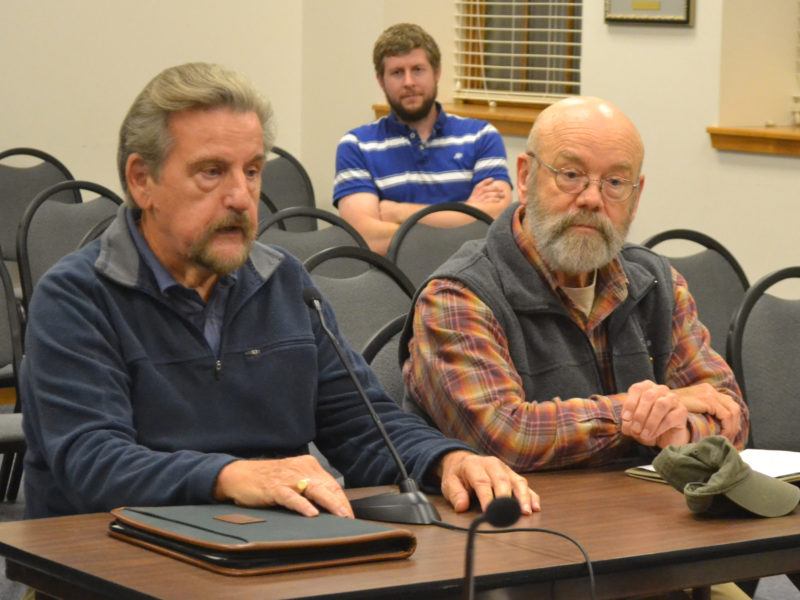 Friends of Colonial Pemaquid President Don Loprieno (left) and board member Barry Masterson speak about the group’s efforts to lease the Colonial Pemaquid State Historic Site from the state during the Damariscotta Board of Selectmen’s meeting Wednesday, Nov. 16. (Maia Zewert photo)

Founded in 1993, The Friends of Colonial Pemaquid is a nonprofit with a mission to promote the historical significance of Colonial Pemaquid. The site includes a replica of Fort William Henry, a fort house, a museum dedicated to the history of Pemaquid, and a burial ground with gravestones dating back to the early 1700s.

The Bureau of Parks and Public Lands within the Maine Department of Agriculture, Conservation, and Forestry owns and manages the site with support from The Friends of Colonial Pemaquid.

Similar arrangements are in place with other historic sites. The Friends of Fort Knox have a lease agreement with the state for Fort Knox and the Penobscot Narrows Observatory in Prospect, according to John Bott, a spokesman for the Department of Agriculture, Conservation, and Forestry.

In the past month, Loprieno and Masterson have attended meetings of the Lincoln County Board of Commissioners and the Bristol, Damariscotta, and Newcastle boards of selectmen to talk about the possible lease.

During each presentation, Loprieno and Masterson have outlined the three major benefits they said the site and the local area would see as a result of the lease.

The Friends of Colonial Pemaquid would use a business model similar to those in place at Fort Knox, Virginia’s Colonial Williamsburg, and Massachusetts’ Plimoth Plantation, with the goal of providing an “economic engine” for the local area, Masterson said.

The Friends would partner with local organizations and businesses in the area to promote the site as a tourist destination.

“A lot of people find us by accident, and we want to change that,” Masterson said.

In addition, the nonprofit has the financial ability to pay higher wages than the state and to hire a full-time, year-round manager, instead of a seasonal manager, Masterson said. It could also extend the season at the site by as much as six weeks.

Loprieno said the starting pay for site managers is less than $15 an hour, and other employees make less. The wages and the seasonal manager’s position drive turnover at the site, which causes other problems, he said.

“If you have a local organization that has rapid turnover every 10 months, people are going to be dubious about making donations,” Loprieno said. “It erodes confidence people might have in the strength or durability of the organization.”

Masterson said he worked for nine different managers at the site during his almost 23 years working there.

“This has never given a manager time to build a relationship with the town, which is critical for a state site that is so closely tied to Bristol,” Masterson said.

The Friends of Colonial Pemaquid also plans to develop the site into an educational destination, offer paid internships for older students, and add more tours and events, Loprieno said. With a full-time manager, it could also bring programs into local schools during the offseason.

In addition, the nonprofit would revive the reproduction of a 17th-century village on the site. The project was originally introduced almost eight years ago, but fell by the wayside after only one structure was partially built, Loprieno said.

“One of the problems is that all of the money that comes into the park through admissions goes into the state’s general fund and then is reallocated to different parks. There’s a lot of competition for financial assets, and there’s never really going to be enough funds to finance a project like the village,” Loprieno said.

The Friends of Colonial Pemaquid has the funds to revive the project and would continue to raise funds to complete the village, which would attract more visitors, as well as more revenue, Masterson said.

Loprieno said LePage was receptive and supportive during the January meeting. Loprieno sent a letter to LePage on Jan. 24 thanking him for the meeting.

“Your generous support and assistance have already increased our determination to make sure this venture is a successful one, and that Colonial Pemaquid becomes better known and achieves the prominent place in our state and nation’s history that it deserves,” Loprieno said in his letter.

After the meeting, The Friends of Colonial Pemaquid entered into negotiations with the state regarding the lease, Masterson said. One of the topics of contention is the lease payments from The Contented Sole, a restaurant on the property.

Mari Wells-Eagar, the assistant to the commissioner for the Department of Agriculture, Conservation and Forestry, said in an email to Masterson on May 13 that LePage has said the state must retain the lease payments from the restaurant.

The governor also “does not agree” that The Friends of Colonial Pemaquid should receive the fees from the boat launch at the site, according to Wells-Eagar’s email.

May, the vice president of The Friends of Colonial Pemaquid, attached Wells-Eagar’s email to a letter he sent to LePage on July 8 regarding the impact of revenue from the restaurant lease on the group’s ability to run the site.

“Because we are being denied essential revenue from an on-site business … the loss of that revenue seriously affects our ability to operate Colonial Pemaquid on a business model, and that means a greater shortfall for the first year or two than originally anticipated,” May said in the letter.

Masterson said the lease money from The Contented Sole would be “critical” to the site’s operations.

The Department of Agriculture, Conservation, and Forestry also needs a citizen support agreement signed by The Friends of Colonial Pemaquid, Wells-Eagar said in her email.

“They sent us the standard form, and Colonial Pemaquid doesn’t really fit into that, so we offered some amendments of our own,” Masterson said.

The amendments were delivered to Ron Hunt, the acting director of operations for the Bureau of Parks and Lands, in July, and the group has not heard back, Masterson said.

After negotiations with the state came to a “standstill,” Masterson said, The Friends of Colonial Pemaquid started collecting letters from area businesses and town officials to send to LePage demonstrating local support for the lease agreement.

The Lincoln County Board of Commissioners and the Bristol, Damariscotta, and Newcastle selectmen all expressed support for the group’s efforts.

“From my personal perspective, I think it’s better than a good idea. I think it’s a great idea,” Bristol Board of Selectmen Chairman Chad Hanna said. “It has a high level of interest in the community, and I think a local project like this would bring a lot of interest to the site.”

Friends of Colonial Pemaquid hopes the support will persuade LePage to get involved and push the project forward, Masterson said.

“Right now our goal is to get the negotiations back off the ground,” Masterson said.