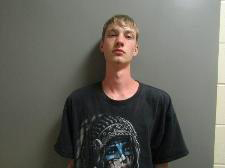 A high-speed chase from Route 27 in Boothbay to Route 1 in Wiscasset, with damage to multiple vehicles and speeds of up to 100 mph, resulted in the arrest of a 19-year-old Boothbay Harbor man on Thursday, Aug. 2.

Andrews was free on bail at the time of the chase. He is under indictment on charges of class A robbery and class C criminal threatening with a dangerous weapon, both in connection with an alleged home invasion in Nobleboro in April.

There were no injuries in the chase.

The Boothbay Harbor Police Department received a report of a vehicle taken without permission by the owner’s son at about 2:20 p.m. Thursday. Andrews “had taken the vehicle and made suicidal threats with a knife,” according to the press release.

Boothbay Harbor police issued an “attempt to locate” alert for Andrews and the vehicle. Shortly after receiving the alert, sheriff’s deputies saw the vehicle, a black 2007 Ford Edge SUV, going north on Route 27 in Boothbay.

When the deputies attempted to stop Andrews, he accelerated, according to the press release. Due to the nature of the report, deputies pursued the vehicle.

The chase proceeded along Route 27 into Edgecomb, onto Eddy Road,  onto Route 1, and across the bridge into Wiscasset.

During the pursuit, the Andrews vehicle struck several cars stuck in traffic, breaking their mirrors. Law enforcement made multiple attempts to deploy spike strips to deflate the vehicle’s tires, but none could be positioned in time.

Due to the collisions, Andrews’ speed, and the lack of more law enforcement units close enough to deploy “spike strips,” deputies ended the pursuit.

Deputies searching the area found the Andrews vehicle in the parking lot of the Montsweag Flea Market, across the Wiscasset town line in Woolwich, at 2:48 p.m.

Andrews had failed to negotiate the turn from Route 1 onto Mountain Road. The vehicle had gone airborne and crashed into the parking area. The parking area was unoccupied, as the market was not open.

Andrews fled on foot into the woods.

Sheriff’s deputies from Lincoln and Sagadahoc counties searched the area, assisted by a K-9 team from the Topsham Police Department, as well as the Wiscasset and Boothbay Harbor police departments.

Andrews was located and taken into custody at 3:36 p.m.

Andrews was medically cleared at Mid Coast Hospital, then booked into Two Bridges Regional Jail in Wiscasset. He is being held without bail, pending review by the courts.

Kane said two deputies were involved in the chase, while others provided assistance, such as by attempting to deploy spike mats. About a dozen deputies and officers participated in the search after the chase.

The sheriff’s office asks witnesses to contact Deputy Chase Bosse or Lt. Brendan Kane at 882-6576 or to email bkane@lincolnso.me.