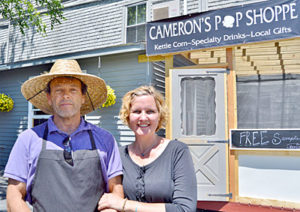 The family-run business has been making popcorn for close to three years for festivals and fairs all across Maine. The owners, Jennifer and Wade Cameron Ingham, bought a manufacturing space on Water Street in Wiscasset last year when they started selling their popcorn in stores. When the vacant store space opened up next door, they got the idea to run their own store. 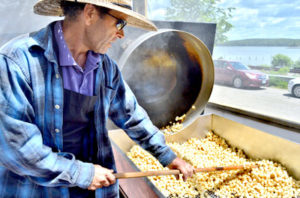 “We figured popcorn is fun and it’s a fun food so we wanted a fun space,” said Jennifer Ingham. “We wanted to be more than just a popcorn place.”

Within the store are various art pieces for sale by local artists, with wall space available for painters and photographers to hang their pieces. The Inghams also sell homemade lemonade, with flavors like strawberry and blueberry, and various local coffees and teas.

All ingredients used in the popcorn and drinks are organic, contain no genetically modified organisms, and are all-natural.

“We want to feed other people what we feed our family,” said Jennifer.

Jennifer and Wade continue to experiment with various flavors, including maple, jalapeno, and cinnamon. Since they develop their own recipes, Jennifer said it can take a few tries to get a recipe just right.

Their most popular item still remains their classic “sweet and salty” recipe.

The Inghams run the store with help from their three oldest boys. Justice, 20, Christian, 18, and Truth, 16, have been traveling with their parents since they first began their popcorn business and quickly learned the trade. Truth even wrote his own business plan and is developing recipes for popsicles, which they hope to add to the store.

While Cameron’s Pop Shoppe has only been open for less than a month, it already has new local “regulars.” Cheryl Howe, of Wiscasset, said she keeps coming back to try out the various flavors of popcorn and lemonade.

“The blueberry lemonade is incredible and I haven’t tried the strawberry yet. I’m giving a lot of these for gifts. It’s incredible,” said Howe. “I usually end up with two to three bags before I leave.”

Cameron’s Pop Shoppe is currently open from 11 a.m. to 6 p.m. Monday, then Wednesday through Saturday. The shop will potentially open on Tuesdays later in the summer, but will remain closed on Sundays throughout the year.

“We know we could make a ton of money, but that’s our family day,” said Jennifer.

Cameron’s Pop Shoppe is located at 49 Water St. in Wiscasset. For more information and specialty orders, go to facebook.com/cameronclankettlecorn.