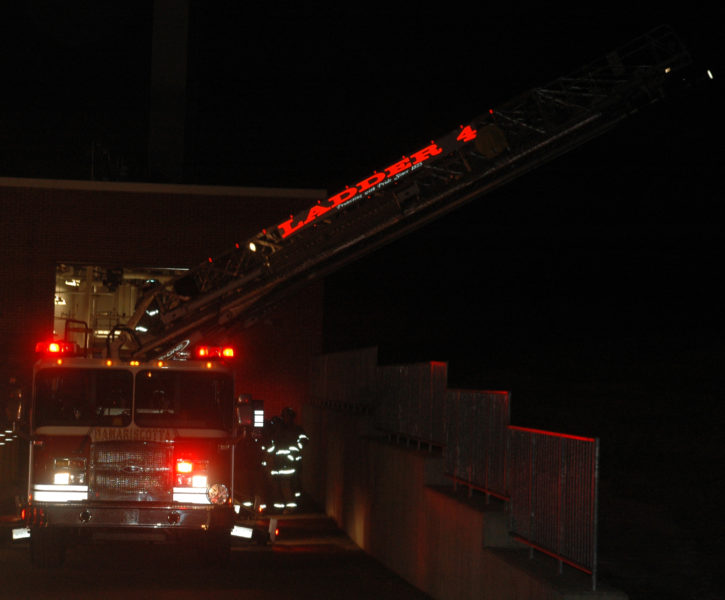 Damariscotta’s ladder truck was called in to assist with a chimney fire at Jefferson Village School on Thursday, March 30. (Alexander Violo photo)

Jefferson Village School was open Friday, March 31 despite a chimney fire the night of Thursday, March 30.

A passerby reported flames coming from the chimney at JVS Thursday night.

According to Jefferson Fire Chief Walter Morris, the department arrived and found the chimney clogged with creosote.

Morris said firefighters began an interior attack with a hose. Firefighters also climbed onto the roof, but were not able to reach the top of the chimney.

Lincoln County Communications dispatched the Damariscotta Fire Department, which has a ladder truck, to assist.

The Waldoboro Fire Department also responded with an engine and additional manpower.

Morris said the rest of the building was checked out and no smoke was found outside the boiler room, where the school’s wood-chip heating system is located.

According to AOS 93 Superintendent Steve Bailey, the fire department cleared the school for occupancy.

Bailey said Morris had verified that all air levels in the rest of the building had checked out.

Bailey said the district and school would follow up on the cause of Thursday night’s incident and work to prevent a reoccurrence.

He said that, though the wood-chip boiler will be down for the immediate future, the school also has an oil heating system, which it will use to heat the building.

Bailey said families and staff were alerted of the incident.

The superintendent said there would be a meeting with an insurance adjuster and a representative of Messersmith Manufacturing, the developer of the wood-chip boiler system, before the system is brought back into service.

In addition to the Damariscotta and Waldoboro fire departments, the Lincoln County Sheriff’s Office also responded to the scene

Morris said 22 firefighters, three engines, a tanker, and a rescue vehicle responded to the scene from Jefferson Fire and Rescue.

The Jefferson Fire Department cleared the scene shortly before 10:45 p.m.