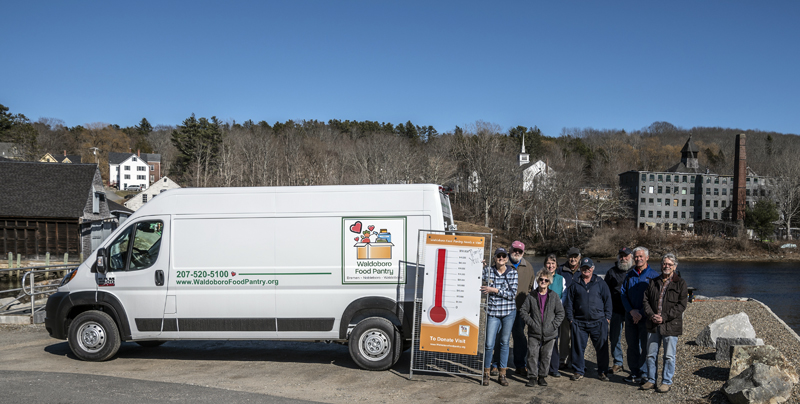 From left: Natalie Masse, Jeff Brown, Janet Lee, Nancy Lippert, Bill Blodgett, Lenny Ryan, Meyer Drapkin, Dale Turner, and Jan Visser stand for a photo with the Waldoboro Food Pantry’s new van beside them and the town they serve behind them in Waldoboro on April 4. (Bisi Cameron Yee photo)

Volunteers for the Waldoboro Food Pantry gathered at the town landing for a commemorative photo of their newest acquisition on April 4.

A brilliantly white Dodge Ram van with freshly applied food pantry graphics was parked by the water with the iconic button factory in the background and the town of Waldoboro behind it. Generous donations to the pantry’s first annual fundraiser made the moment possible. 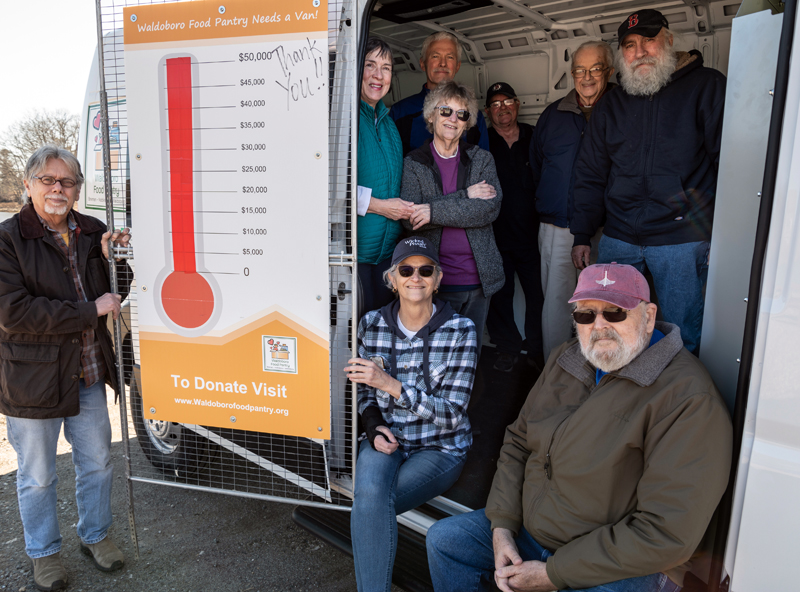 Volunteer Lenny Ryan, who, with Lee, made that morning’s maiden trip to pick up meat and vegetables in Brunswick, discussed removing an unnecessary trailer hitch with director at large Jan Visser.

“It’s quite a nice addition,” Blodgett said of the van. “And you can stand up in it. It makes life easier for the volunteers who do the hard work.”

As a volunteer since the earliest days of the food pantry in the 1980s, Blodgett has long memories of crawling around in the back of lesser vehicles trying to load and unload boxes of food. 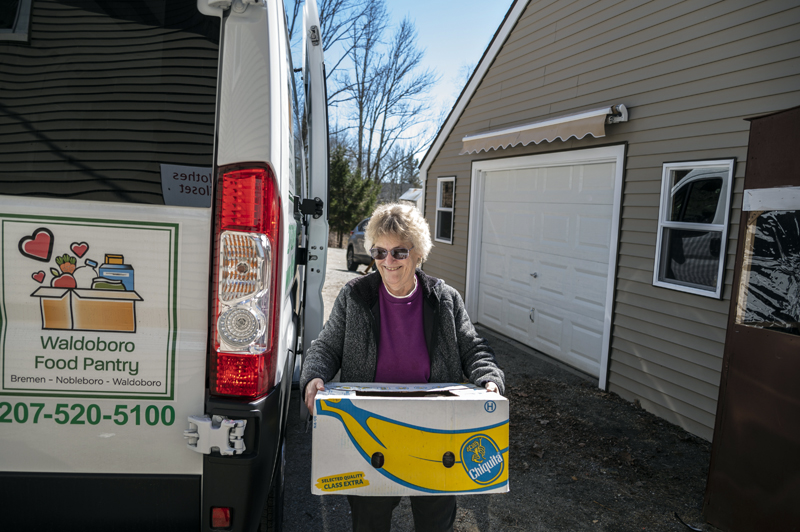 Janet Lee smiles wide as she unloads a box of produce after the maiden voyage of the Waldoboro Food Pantry van in Waldoboro on April 4. Lee is the organization’s current operations manager, but advocated for the van when still a volunteer. (Bisi Cameron Yee photo)

“These guys are going to be playing with their new toy for hours,” said Nancy Lipper, board vice president.

Lee and Ryan drove the van to Brunswick earlier that day to pick up meat and bread at Mid Coast Hunger Prevention Program. When they returned to the food pantry’s location on Friendship Street in Waldoboro, they quickly unloaded.

“This is so much easier,” Ryan said. “No climbing.”

But it’s more than that. According to Masse, having a predictable source of transportation will change the game for the food pantry. The pantry has long relied on personal vehicles to pick up food from as far away as Augusta, Brunswick, or Rockland. There have been times they scrambled to find a pickup truck to make the time-sensitive trip that occurs each day before their scheduled bi-weekly food distribution. There have been times they needed two pick-ups. 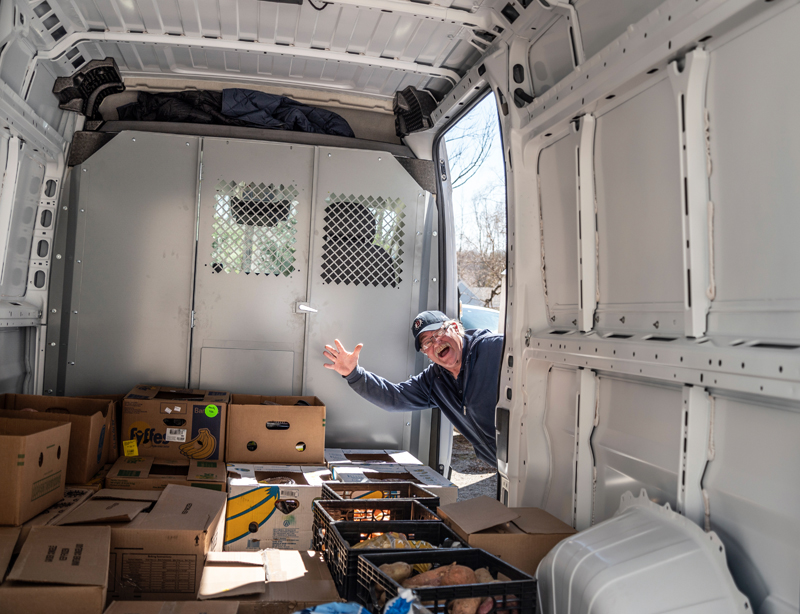 Lenny Ryan waves through the cargo door of the Waldoboro Food Pantry’s spacious new van in Waldoboro on April 4. The van will be used to pick up food from the Good Shepherd Food Bank and Hannaford Supermarket and to deliver to transportation-challenged residents of the Sproul Block in Waldoboro. (Bisi Cameron Yee photo)

“It’s been a huge hassle,” Masse said. “This is a major source of food for our customers, and there have been very anxious times when we weren’t sure we would have a vehicle.”

For Masse, the biggest benefit of the new van is that it will alleviate the stress and sense of uncertainty around their ability to procure food when the people who rely on their service need it.

The van is an important asset for other, more obvious reasons, as well. They can transport more food. More meat. The van’s cargo capacity is actually larger than the food pantry’s freezer capacity. More bread. They brought back five cases of bagels, cakes, cookies, English muffins. More produce. Although the war in Ukraine impacted supply chains and there were no oranges or apples available this trip.

They nabbed some ice cream instead, something they’ve never had room for before. “They made us take it,” Lee said. “Two boxes!” 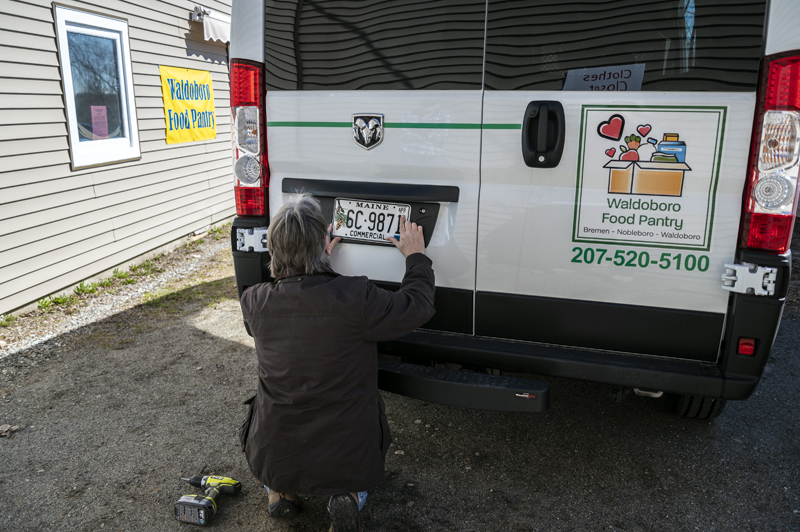 Jan Visser puts permanent plates on the back of the Waldoboro Food Pantry’s new Dodge Ram 3500 van in Waldoboro on April 4. The vehicle was paid for with the more than $50,000 raised during the pantry’s first annual fundraiser. (Bisi Cameron Yee photo)

They even had room to include some of the extra amenities that are available on food pantry days when they can source them. Things like toilet paper and shampoo, dog food and toothpaste. This trip they scored baby wipes.

Another way the van will immediately alleviate the strain on food pantry volunteers is by making their regular delivery to the Sproul Block in a single trip. Volunteer Maurita Lord usually makes three. And each time she returns to reload it interrupts the flow of food to the long line of cars that often spill out onto the street. Supplies of milk and eggs may run out before she is able to make her second or third trip and the home-bound residents then go without.

Now the van can be filled ahead of time, the delivery completed even before the food pantry opens. 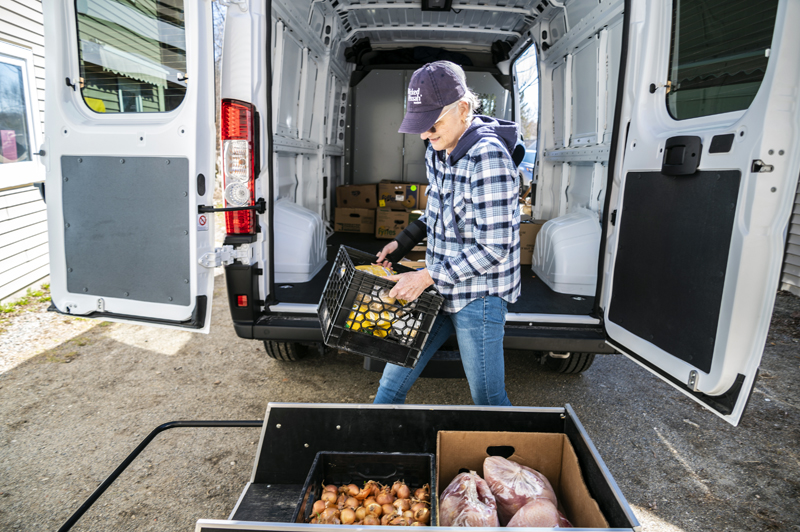 Natalie Masse helps unload meat and produce from the back of the Waldoboro Food Pantry’s newly acquired van in Waldoboro on April 4. Masse, the food pantry’s treasurer, supported the need for the van and helped jump start the successful fundraising effort. (Bisi Cameron Yee photo)

Masse said the board of directors took a little convincing to invest in the vehicle. They wondered if buying a used van might be more economically sensible. But supply chains are having an effect on the availability and price of used vehicles, too. The cost of a van with 100,000 miles wasn’t much less than buying new, Masse said.

So they made a down payment at Key Chrysler Dodge Jeep Ram of Newcastle, and waited. It took a while, but when the van finally arrived at the dealership, Masse said there was “a trail of food pantry volunteers” stopping by to admire it. 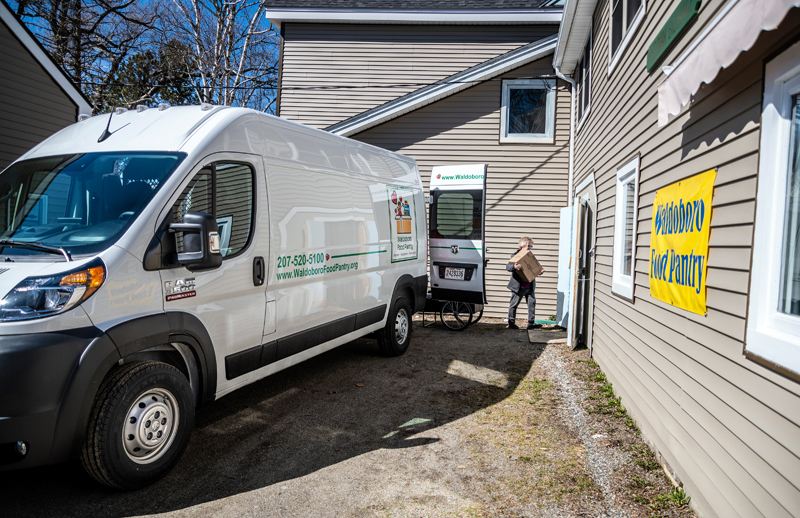 It was Lee, who first started advocating for a van. She put a bug in Brown’s ear and he presented it to the board of directors for approval in September 2021. A fundraising committee was formed and Board Secretary Ellee Simons wrote the initial donor letter and spearheaded the drive.

Simons passed away unexpectedly on Feb. 5, but her efforts on behalf of the food pantry over the years, culminating in the fundraising drive, were instrumental to both the past and now the future of the Waldoboro Food Pantry.

The van is nicknamed “Miss Ellee” in her honor. 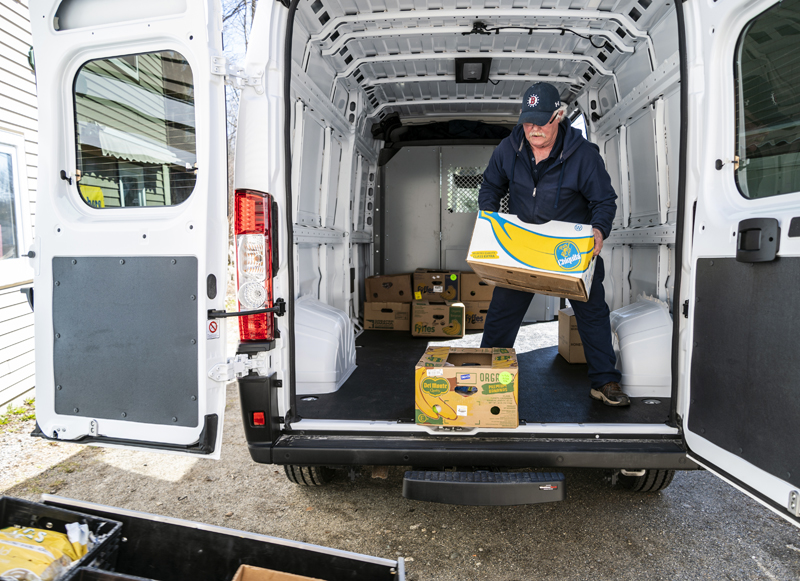 Lenny Ryan lifts cases of food off the Waldoboro Food Pantry van after returning with a load from the Mid-Coast Hunger Prevention Program in Brunswick on April 4. The van allowed Ryan and Operations Manager Janet Lee to pick up more food than was possible using volunteers’ personal vehicles in the past. (Bisi Cameron Yee photo)

Waldoboro Public Library Director Kat Skov was another figure who helped bring the wish for a van to fruition. Skov walked the fundraising committee through the process for an annual appeal and provided the template that led to their success, according to Masse. 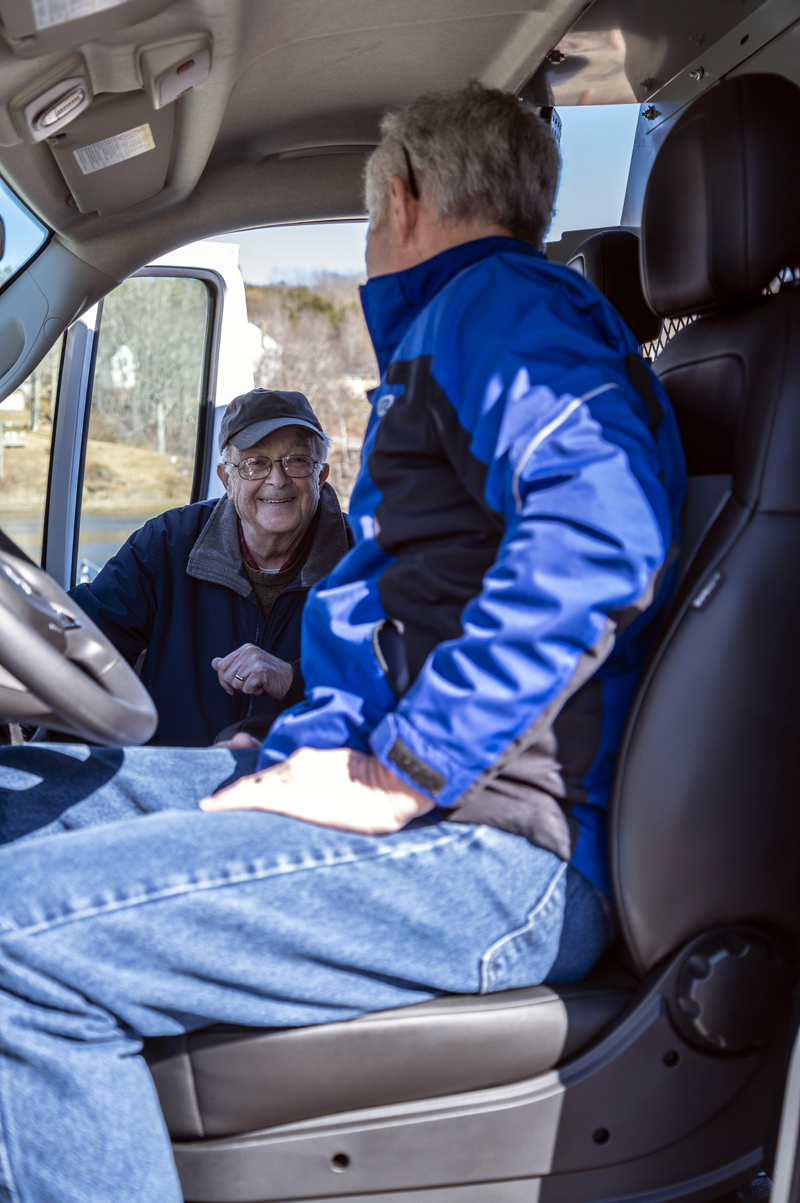 Fundraising began in mid-December and the tracking barometer posted at the end of the food pantry driveway topped out at $50,000 by mid-March. It took only three months.

One big chunk came from the Good Shepherd Food Bank. The food pantry applied for and was awarded a $20,000 Capacity Building Grant from Good Shepherd. The grant included a requirement that they procure an extended warranty so the van is covered for seven years.

Highbrow, a Waldoboro cannabis dispensary, donated $5,000. First National Bank contributed another $5,000 to the cause. A number of Waldoboro businesses stepped up and individual donors were also generous.

“It took an entire community to make it happen,” Masse said. “And they came through in a big, big way.”

The drive exceeded its initial goal with more than $57,000 raised. The additional money allowed them to purchase a cargo partition and a vehicle wrap of their logo. It will also help pay for additional safety equipment and insurance.

The van enables the Waldoboro Food Pantry to look at future goals from a new perspective. It gives the organization the ability to be a mobile resource to the wider community, to get food to more residents who face transportation barriers.

“I would love to deliver food to people. That’s the best,” Masse said.

The board of directors may also look at holding pop-up food pantries in other locations. “Different opportunities might present themselves now that we have a van,” Masse said.

But she knows they need to get the food pickup routines down to a science before they take on more. There are miles yet to go.

But now they can drive them.

The Waldoboro Food Pantry is located at 124 Friendship Road and is open from noon to 3 p.m. every first and third Tuesday of the month. The pantry serves the communities of Waldoboro, Bremen and Nobleboro. New clients experiencing food insecurity are always welcome.

Donations can be mailed to: Waldoboro Food Pantry, P.O. Box 692, Waldoboro, ME 04572, or submitted online at waldoborofoodpantry.org.