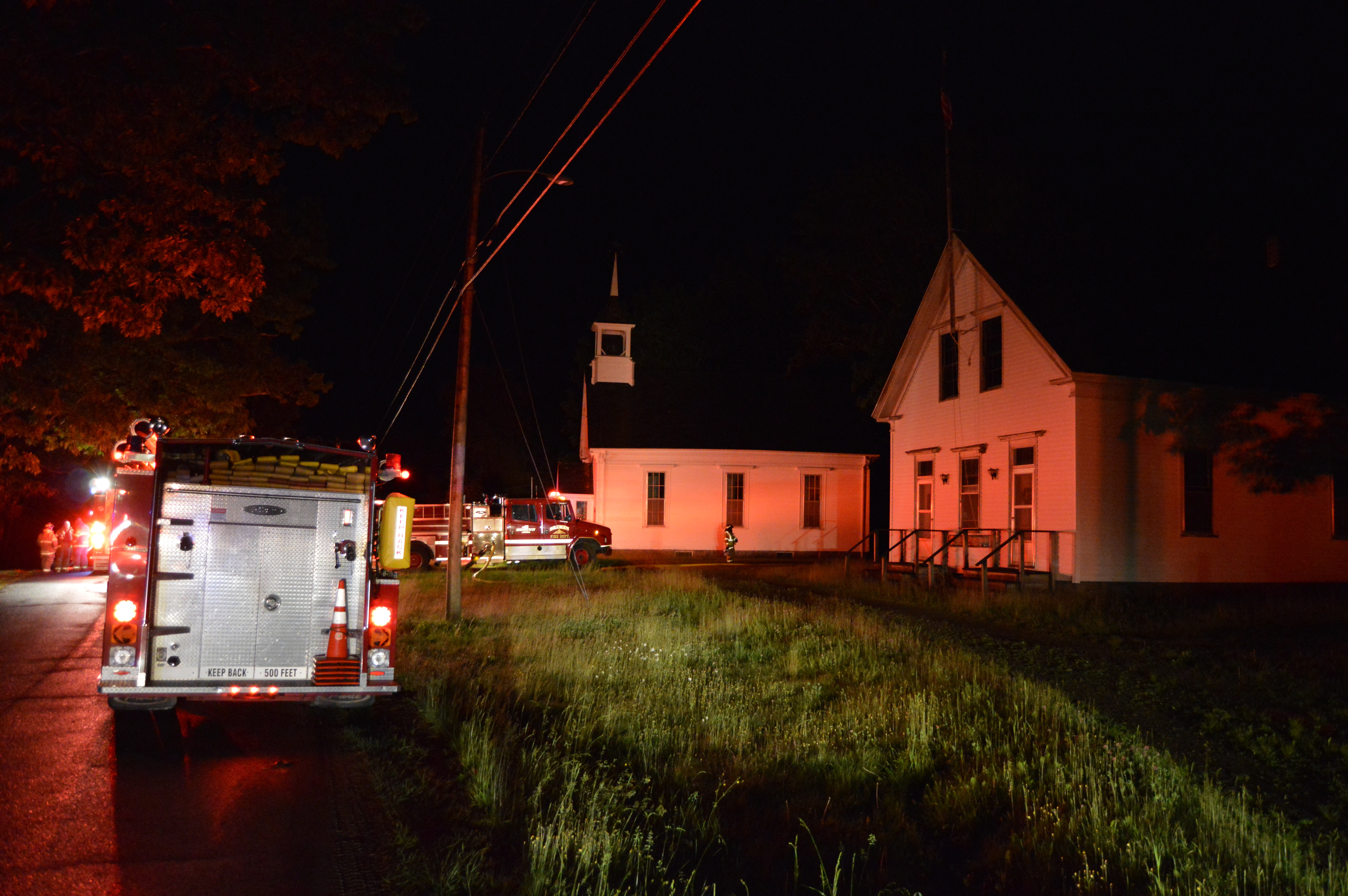 Firefighters and trucks at the scene of a fire on Dutch Neck Road in Waldoboro late Thursday, June 14. The buildings visible are the historic St. Paul’s Union Chapel and Dutch Neck Schoolhouse. The fire was at a house on a driveway behind those buildings. (J.W. Oliver photo)

A father and son from Massachusetts sustained severe burns when a propane leak caused an explosion and fire at their friend’s summer home on Dutch Neck Road in Waldoboro the evening of Thursday, June 14.

Robert Keefe, 59, and Ryan Keefe, 28, of Dracut, Mass., are being treated for “serious burns” at Maine Medical Center in Portland, according to a statement from Maine Department of Public Safety spokesman Stephen McCausland.

The Keefes remain at Maine Med as of Tuesday, June 19, according to a spokeswoman for the hospital. Robert Keefe was in fair condition, while Ryan Keefe was in critical condition.

The Keefes were in the basement of the house at 1083 Dutch Neck Road when they turned on the dryer and the explosion took place. “The force knocked the house off its foundation and (the) men escaped through a basement window … The resulting fire burned the house to the ground,” McCausland said in the statement.

The house is on a dirt driveway behind the Dutch Neck Cemetery, Dutch Neck Schoolhouse, and St. Paul’s Union Chapel. The Keefes were there to open the house for the summer for its owner, Robin Pancygrau, of Chelmsford, Mass.

Pancygrau was not present, according to an earlier statement from Waldoboro Fire Chief Paul Smeltzer.

The Lincoln County Communications Center dispatched emergency services to a report of an explosion and visible flames and smoke at 8:30 p.m.

Smeltzer arrived and “discovered the residence fully involved and two individuals with severe burns outside the residence,” he said in a statement.

The occupants were originally taken by ambulance to LincolnHealth’s Miles Campus in Damariscotta, according to Smeltzer.

The Maine State Fire Marshal’s Office investigated and identified a propane leak as the cause of the explosion and fire.

The road was shut down during the fire and neighborhood residents who live beyond the address were not able to return home. Flames were still visible from the road at nearly 10 p.m.

The Bremen, Nobleboro, Waldoboro, and Warren fire departments responded to the scene, along with Waldoboro Emergency Medical Services and the Waldoboro Police Department. Bristol was dispatched to cover Bremen’s station.