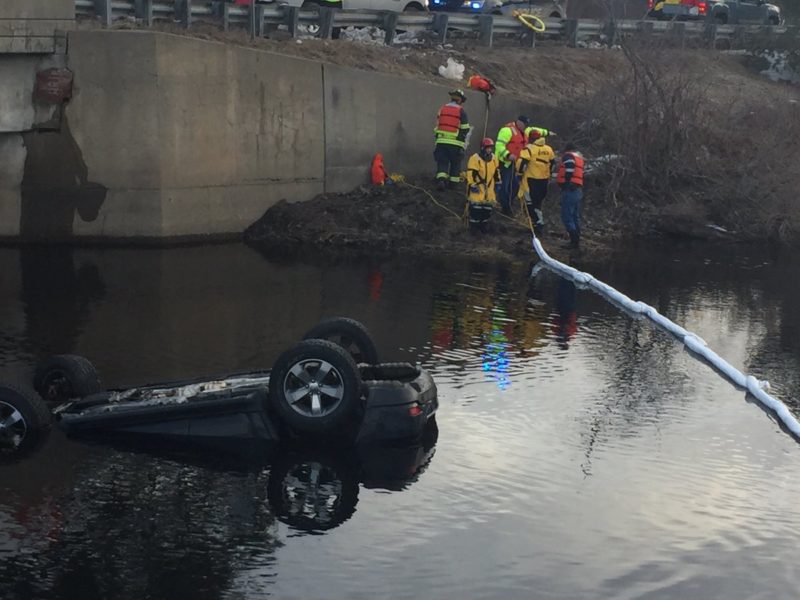 Emergency responders work at the scene of a vehicle submerged in Medomak River in Waldoboro the morning of Sunday, March 25. (Jessica Picard photo)

A 48-year-old Damariscotta woman died when her SUV crashed on Route 1 in Waldoboro and landed in the Medomak River the morning of Sunday, March 25.

The Waldoboro Police Department identified the woman as Melissa Sawyer, a former longtime resident of Waldoboro and secretary at Medomak Middle School. She was the sole occupant of the vehicle.

Waldoboro Police Chief Bill Labombarde said Sawyer moved to Damariscotta about a year ago. “She was very well-known in Waldoboro,” he said. “She lived here for many years.”

Sawyer was driving a Jeep Grand Cherokee south on Route 1, across the bridge over the Medomak River by the intersection with Route 32, at the time of the accident, according to Labombarde.

The Lincoln County Communications Center dispatched Waldoboro Emergency Medical Services and the Waldoboro Fire Department at 6:56 a.m. for a report of a vehicle “upside down and almost completely submerged” in the river.

Labombarde said police received a call at 6:54 a.m. and Officer Jeffery Fuller arrived at the scene at 6:57 a.m., with the fire department arriving one minute later.

The fire department attempted a rescue, but could not determine whether anyone was in the vehicle, according to a press release from the police department.

Route 1 and Kaler’s Corner Street – Route 32 on the south side of Route 1 – were shut down for about an hour while a crane removed the vehicle from the water.

The vehicle was taken to the Waldoboro Fire Department, where the victim was extricated and then transported to Hall Funeral Home nearby, according to the press release. The vehicle has been impounded pending further investigation.

Police do not know when the accident occurred.

“We can’t know for sure what time the vehicle went into the water,” Labombarde said.

Labombarde declined to comment on when Sawyer had last been seen, saying it is part of the investigation.

The Knox County Sheriff’s Office is conducting an accident reconstruction and will give Waldoboro a report when it’s ready, according to Labombarde.

Investigators would need either consent or a search warrant to conduct a vehicle autopsy, Labombarde said.