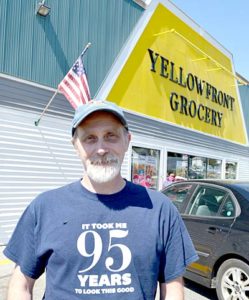 Yellowfront Grocery owner Jeff Pierce stands in front of the store, which is celebrating its 95th anniversary. His shirt – a gift from a customer – reads “It took me 95 years to look this good.” (Maia Zewert photo)

Yellowfront originally began as Pierce’s Meats. Linwood “Mutt” Pierce founded the business in what is now Sherman’s Maine Coast Book Shop in 1921. Years later, the store was passed from Linwood to his son, Edward. When Edward retired, he passed it to his brother, Denham.

In 1990, Denham passed the store to his three sons, Don, Steve, and Jeff, who still run the business today.

The store has undergone some changes in its 95 years in business. The store moved from downtown to the Coastal Marketplace plaza, and the grocery business has evolved.

“Everyone sells groceries now,” Pierce said. “Things have gotten a bit more competitive, but we’re still here because of our loyal customers. Some of them have shopped with us since I was a kid.”

Although no new charge accounts have been opened in recent years, customers still use the accounts, some of which have been passed down from generation to generation since the store opened, Pierce said.

The store has also seen some physical changes. In addition to expanding the dairy and frozen sections, Yellowfront recently completed a renovation to the front of the building, including repainting the sign, installing new windows, doors, and siding, and building a new entryway.

One thing that hasn’t changed over time is Yellowfront’s meat section.

“The meat department has always been our big calling card, ever since we began,” Pierce said.

Another mainstay is the store’s commitment to the community. Pierce said Yellowfront helps multiple community organizations, including the food pantries and the secondhand book store. On Fridays, Yellowfront delivers groceries to people who cannot make it to the store to do their shopping.

To celebrate 95 years in business, Yellowfront is hosting an anniversary sale until Sunday, June 26. The store will give away two $100 gift cards, three $50 gift cards, and a cooler. Customers could also win a Shurfine reuseable grocery bag with barbecue sauce, ketchup, mustard, and a box of pasta.

Looking ahead to the 100th anniversary in five years, Pierce said he hopes to continue the store’s focus on providing quality community service.

“I hope we’re doing as well as we are now or better,” Pierce said. “We’re just going to keep plugging along to keep our customers happy and smiling.”