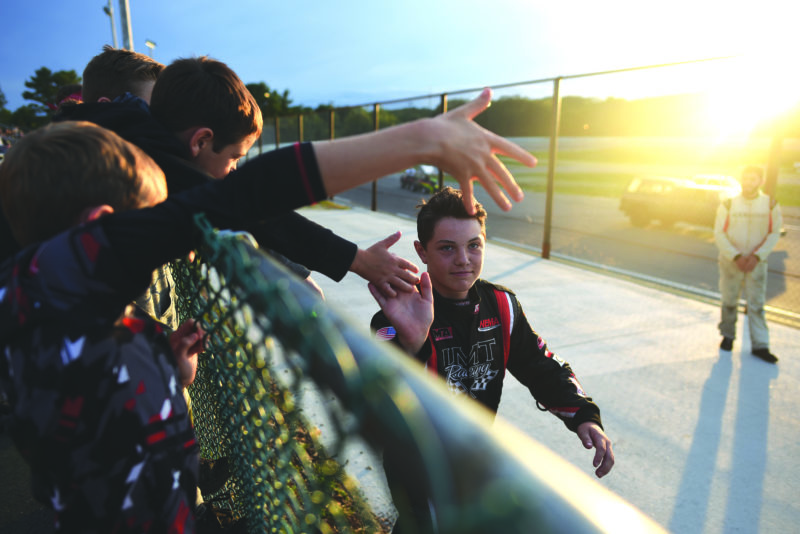 In the warmth of the summer sun, Wiscasset Speedway’s announcer and promoter, Ken Minott, shares with drivers a sentiment that has been a part of the track for the past 50 years. “Let’s have a good, safe night and put on a show for the fans!” he says, the anticipation able to be felt in the air.

As the drivers gear up for the night’s events, a crowd of children yell, “Drivers, start your engines!” from the stands in anticipation of the race cars taking off, all competing for first place.

The 3/8-mile high-banked oval stock car track was built and opened in 1969 by Wilford Cronk. The only banked track in Maine, it rises 8 to 12 degrees in various parts of the track, giving drivers their speed.

“He built it according to his dream,” current Wiscasset Speedway co-owner Vanessa Jordan said of Cronk, who passed away in 2013. “It just says a lot for this man and his vision.”

Over the years, the track changed owners and names, but it has remained “Maine’s biggest and fastest,” as its motto proudly proclaims, with the record being 13.04 seconds to do the full loop.

The prostocks – what some might refer to as factory hot rods, with no artificial induction — average around 90 miles per hour on the track, taking around 15 seconds to complete a lap, according to Minott.

Richard Jordan, who owns the track with his wife, Vanessa, was born in Boothbay and co-owns Jordan Lumber in Kingsfield.

“I’ve always loved racing … I’ve always loved anything that had a motor,” Richard Jordan said. He was 15 years old when his mother brought him to the then newly opened Wiscasset racetrack around 1969.

“I think I was probably at the first race at Wiscasset Speedway,” he said.

“She liked what (racing) did for her family,” Richard Jordan said of his mother. “I wish she could have seen this.”

This story originally appeared in its entirety in the 2019 Live from Lincoln County edition of Lincoln County Magazine. To read the full story, click here.