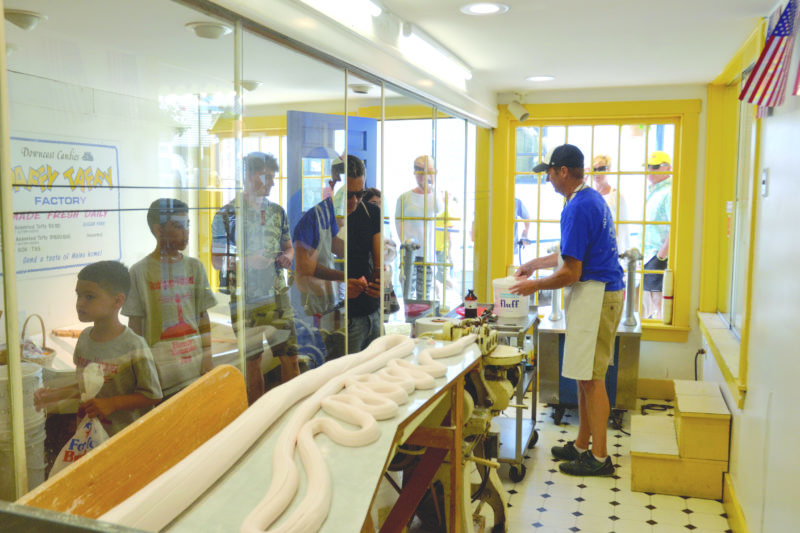 If you’re walking down By Way in Boothbay Harbor, don’t be alarmed if you see a group of people huddled outside a bright-yellow building. Chances are they’re likely under the spell of an antique machine pulling strings of taffy in the large window of Downeast Candies.

Working in an air-conditioned glass room, candymaker Rick Carmolli feeds a long rope of root beer taffy into the Model K Kiss wrapping machine, while his son, Ethan, watches for any candies that attempt to sneak through without a perfect wrapping.

“You don’t really notice after a while,” Rick says about the crowds. He still cracks a smile, however, at the audible reactions from bystanders as he pours a shot of flavor over the rotating taffy.

The family business has come a long way in 45 years. Sitting alongside trays of fudge overlooking the street, Pat Carmolli, the president and owner of Downeast Candies, recalls that the inception of the shop came about when she and her husband at the time, Dave Carmolli, were living in Florida.

Having recently been laid off, Dave was chatting with his friend Ray Hebert, of Hebert Candies, who happened to be visiting from Massachusetts. Knowing that the Carmollis vacationed in the Boothbay region, Ray mentioned his belief that a fudge factory would do well in the area.

After a hands-on lesson in Massachusetts that ended with Ray gifting Dave the fudge recipe, the Carmollis began their business in 1974 in a cottage on the Townsend Gut. The couple made huge batches of fudge, which were then boxed and sold to local gift shops.

The business had already outgrown the space by the following year, so the Carmollis relocated to a space on Route 27. That same year, a small space at 7 By Way became available to rent, and the Carmollis would go on to buy the building shortly after. With the expanded space, taffy was added to Downeast Candies’ offerings, another recipe gifted from Ray.

“It’s been quite a ride actually. When we started, I was a teacher, and so I would work here in the summer and teach in the rest of the year,” Pat said. “We never dreamed when we started that we’d be here years later.”

This story originally appeared in its entirety in the 2019 Made in Lincoln County edition of Lincoln County Magazine. To read the full story, click here.