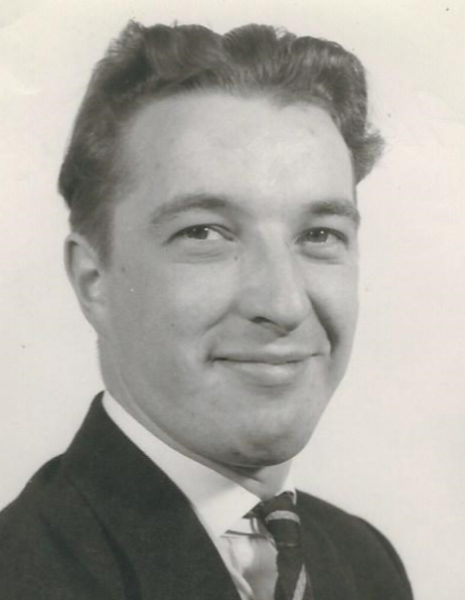 Alan J.D. Scease passed away peacefully of natural causes at the Glenridge long-term care center in Augusta on Dec. 9.

Alan Scease was born in Kensington, London on Nov. 9, 1930 and grew up on Cricklewood Lane, Golders Green, in northwest London. He and his family survived the Blitz, which devastated the city in WWII. He and his sister were evacuated to the countryside but after a short time rejoined their parents.

Alan attended technical school and trained as an electrician, working for the British national phone company. He fulfilled his National Service with the British Army in Korea in 1950 and 1951, serving as a driver for a brigadier general.

Alan’s restless ambition and his desire to escape the limits that British life imposed on working class people led him to emigrate to America. He followed his parents and his only sibling, Elaine, to New England in 1955.

For Alan, America was truly the land of opportunity, and he rose as high as his imagination, charm and great intelligence allowed. He worked in a variety of management jobs in manufacturing before starting and co-owning two nursing homes in central Maine. Alan and his first wife Jane raised six children. They were active in the Democratic party in Lincoln County, and Alan was a fixture at the State House, lobbying for the nursing home industry.

After his retirement, he set up shop as a rare book dealer. Always an early adopter of new technology, he was one of the first of his peers to get his book catalog online, and he developed a loyal client base on the internet who turned to him for hard-to-find volumes.

He suffered from dementia the last several years of his life, cared for by his dear friend Carol Mathiesen of Orland for three years. He spent the last three years in the care of the wonderful staff of Glenridge Nursing Home in Augusta.

Alan had an eye for the open road. As a youngster, he was a devoted Boy Scout, attending jamborees in England and once in France. He earned the title of Queen’s Scout, equivalent to the American Eagle Scout. He hitchhiked all over Britain, in one weekend crossing the entire island from Land’s End to John o’ Groats. He also acted in a travelling theater troupe, the Taverners, which performed in England and France. Once in America, Alan never missed an opportunity to get in a boat, sailing up and down the Maine coast in the converted lobster boat his family called “Big Tubby” and later aboard his sailboat Windaria.

Alan was a handyman of wide-ranging skill, able to tackle any building or renovation job around the house or boat: carpentry, plumbing, electrical wiring, flooring, painting, even diesel engine repair.

You could find Alan lingering whenever possible over the finer things in life, whether a piece of music by his favorite classical composer, a friend with funny stories to tell, a meal he cooked, a Gibson (a Martini garnished with a pickled onion), or, of course, a good book.

He was predeceased by his wife, Nancy Arey of So. Thomaston.

Donations in Alan’s name may be made to Heifer International, 1 World Ave., Little Rock, AR 72202, or online at www.heifer.org.

The family will hold a celebration of Alan’s life on the Maine coast next summer.