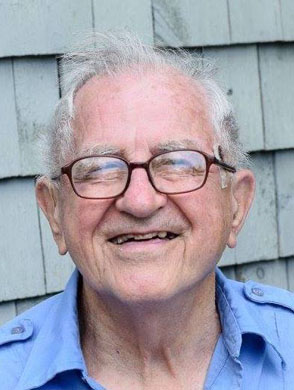 He was born May 18, 1926 in Whitefield to Chester A. Boynton and Addie F. (Knight) Boynton. He was the youngest of seven children. He was born at the mill house across the road and moved to his current address one year later.

Albert was very much influenced by his mother, who died when he was 6 years old. He always referred to her as “Mama.” He spoke of how she baked big pans of molasses cookies and raisin squares and took the responsibility to open the church and played the piano there. She had a marble-top table full of African violets and took all the kids with her in the car to collect bills for his father’s sawmill business. After she died, his father kept their family together through the Great Depression, even after losing his lumber business. Albert thought of him as a hero.

It was a hurricane in 1938 that brought their family out of the Depression, when they were able to take a portable sawmill to Peterborough, N.H. to clean up downed trees for wealthy families. Albert called it an “act of God.” He went to Peterborough High School for two years. When the family moved the sawmill to Plainfield, Mass., Albert went with his brother George to East Hartford, Conn. and attended school there for a semester. He then returned to Whitefield with his family and finished high school at Erskine Academy, graduating in the class of 1943.

After starting classes at the University of Maine at Orono, Albert decided to enlist in the Navy because he wanted to choose the branch he served in. He chose the Navy because he liked the blue uniforms rather than the olive drab. He entered boot camp in May 1944, on his 18th birthday, and served for two years on the USS Goodhue. It wasn’t until later years that he shared with great emotion what it was like to have his ship hit by a kamikaze and witness the loss of many of his shipmates.

When he came back from serving in World War II, he returned to UMO, finishing with a bachelor’s degree in agricultural engineering. He graduated in 1950 and got a job at Togus as an orderly to be able to pay for equipment for dairy farming. He met his wife Carolyn there who was a registered nurse at the facility, and they married in 1954. She was the first and last girlfriend that he ever had.

Albert worked for 30 years as a rural mail carrier in Whitefield, Coopers Mills, and Somerville. He went the extra mile for his customers and enjoyed working with many special people. The job of mail carrier suited him to a T. 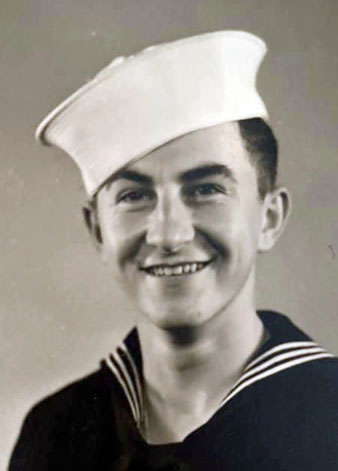 Albert went out of dairy farming when his barn burned in 1967 but always maintained a small herd of dairy cows. He accepted Jesus as his Savior on Palm Sunday, 1971, which was the defining moment of his life. His faith influenced every aspect of his life from then on. In retirement Albert cared for Carolyn for 12 years until her death in 2003.

He was a member of Calvary Bible Baptist Church in Whitefield, and later South Somerville Baptist Church. He enjoyed being in God’s House and reading and studying His Word. He passionately wrote letters to local papers on issues of life and morality. He was an avid reader and was always singing.

Albert was predeceased by his beloved wife, Carolyn Tarbox Boynton; three daughters, Jeanne, Nancy, and Mary Anne; and a grandson, Taylor Kittner. He was also predeceased by his mother and father; and six siblings: Virginia, Alden, Marcia, George, Dana, Shirley and their spouses.

Albert is survived by a son, David Boynton and his wife Melissa of Whitefield; a daughter, Beverly Cronkhite and her husband Rick of Whitefield; and a daughter, Janet Kittner and her husband Wilfred of Charlotte, N.C.; grandchildren are Kate Parker and husband Joe of Augusta, Sam Boynton and wife Julie of Walpole, Mass., Meg Dyer and husband Jeff of Palermo, Sawyer Maldovan and girlfriend Taylor Hickey of Whitefield, Miranda Proud and boyfriend Josh Grenier of Fairfield, Justin Cronkhite and wife Courtney of Whitefield, Addie Joslyn and husband Jeremy of Jefferson, Olivia Finnemore and husband Brendon of Rockland, Jonah Cronkhite and wife Lydia of Waldoboro, and Natalie and Brigitte Kittner of Charlotte, N.C.; and great-grandchildren are Cora and Ivy Parker, Ilyda, Vivian, and Ruby Dyer, Mia, Riley, and Izzy Proud, Abe Cronkhite, Brennan, Grayson, and Haven Joslyn, Afton Finnemore, and Makiyah and Mitchell. He was also the guardian to Larry Sturges. Albert was very much looking forward to meeting three more precious great-grandchildren this year. Albert also leaves behind many nieces, nephews, and friends.

Observing COVID-19 guidelines, public visiting hours will be from 6-8 p.m. on Friday, Feb. 5 and from 9-11 a.m. on Saturday, Feb. 6 at Plummer Funeral Home, 983 Ridge Road, Windsor. The funeral service will be private. Spring burial will be in Highland Cemetery, Jefferson.

Condolences, stories, and photos may be shared at plummerfh.com.