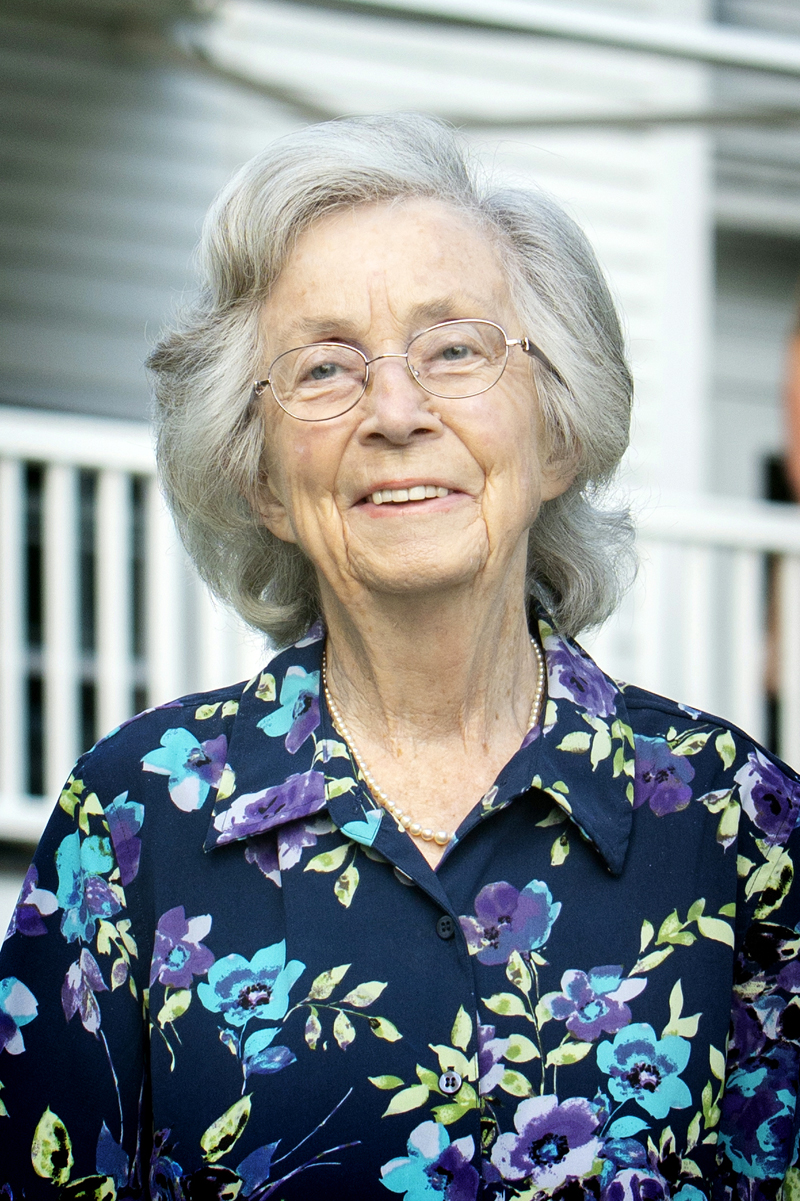 Alice Margaret Trask Fossett, 89, of Boothbay Harbor, died on Feb. 21 at her home surrounded by her loving family.

Born on Feb. 23, 1930 at home on Park Street, just steps from where she lived on Atlantic Avenue for 55 years.

Alice was married to Chester F. Fossett for over 64 years. She was the youngest of four children born to the late John and Ethel Young Trask and was predeceased by her two brothers, J. Gordon Trask and William Trask.

Alice worked since she was in elementary school as a farm worker after school and in the summer in South Portland, where they moved during the war. She worked in toy, shoe, and spice factories in Portland, at her grandmother’s hotel on Squirrel Island in the summers during WWII with her best friend Betty Gray, as an usher in the Portland movie theater, and in the hospital kitchens at Maine General Hospital.

She graduated from Portland High School in 1947 and followed Evelyn, her sister and best friend, to the Maine Eye and Ear Infirmary graduating as a registered nurse in the Class of 1950. She worked as an RN in Boothbay Harbor, Arizona, and Hawaii before returning to Boothbay Harbor to marry Chester Fossett on Aug. 15, 1954. They were married at the First Methodist Church in Boothbay Harbor.

As her children grew up Alice worked as a private duty nurse in Boothbay Harbor in the summers and returned to school and eventually graduated from the University of Maine working as an educational aide all the while. She drove year-round to evening courses at UMaine at Augusta, Orono, Bangor, and Portland for her B.S. degree in elementary education. After graduation she was a kindergarten teacher at the Boothbay Harbor Elementary School, then at the new Boothbay Region Elementary School where she was the first professional elementary school librarian and later a reading teacher.

For five years she travelled to the University of RI for five weeks every summer and every Wednesday during fall and spring semesters to UNH in Durham from Boothbay Harbor to receive her MLS. Alice received support from her family in those long drives, especially from her husband Chester. She received a Masters in library science and received a second degree for a Masters in reading. She created the Boothbay Region Elementary School library from scratch and received local and state accolades.

Alice retired from the library after 17 years and became a BRES Reading Recovery specialist, traveling to New Zealand, The Ohio University, and Lesley University for her program of study. She took advanced coursework in children’s literature in reading and writing for public and school librarians and teachers in China and Hong Kong; Scandinavia, the former USSR, Eastern Europe; Chile, Bolivia, Ecuador, the Galapagos, Brazil, and Peru for many years in the summer.

All that time Alice raised four children, managed an apartment house while her husband was out at sea, cooked creatively, knit and sewed beautiful clothing for her children and herself as well as for other family members, worked in her beloved flower gardens, and made certain that her family came first.

She first survived cancer at age 38. She cared for her parents and in-laws and other relatives in their times of need and, until her recent illness, was a tireless volunteer at the First Methodist Church in Boothbay Harbor where, among other activities, she made fruit pies for every pie sale and church supper.

A few of Alice’s myriad of volunteer activities in the community include Girl Scouts, United Methodist Women, the Southport Public Library, Boothbay Region Historical Society, Boothbay Region Elementary School, and the Maine Holocaust Commission. Alice was a lifetime member of the Eastern Star. Until her illness she took a daily walk of a mile or more across her beloved footbridge and around the harbor.

Alice and her older sister, Evelyn, traveled to their mother’s native Scotland to visit her village of Whitlets by Ayre near Glasgow. Alice and Chester passed the travel bug to all their children and Alice accompanied her daughter, Elaine, and her granddaughters for annual trips to Europe until her recent illness finally slowed her down. Her greatest thrills were when the family gathered for holidays and summers in Boothbay Harbor.

Alice will forever be remembered by family and friends alike for her love of family, her never ending patience, her gentle demeanor, and above all her kindness.

A celebration of Alice’s life will be held in August at a date to be determined.

In lieu of flowers, those wishing to make a donation in memory of Alice Margaret Trask Fossett, please send to Boothbay Harbor Memorial Library, 4 Oak St., Boothbay Harbor, ME 04538.

Hall Funeral Home and Tribute Center is entrusted with her arrangements.