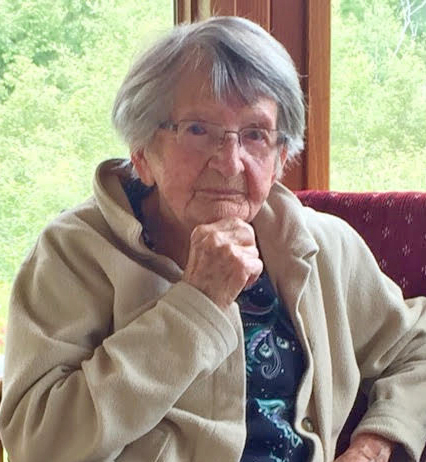 Alice Morse Benjamin, 101, passed away peacefully on Sept. 26 with her family at her side.

Alice was born on Aug. 3, 1915 in Waldoboro to Katie Burns and Frank Simmons. She attended Waldoboro schools. She worked several jobs locally including rug braiding and Moody’s Diner. She was married to Charles Morse 25 years and raised three daughters. Charles passed away in 1959. Later Alice moved to Newburg, N.Y. where she worked at Dubet and met her second husband, Amesy Benjamin.

Alice and Ben enjoyed many years of retirement together. They enjoyed 14 cruises to various ports of call, including the Panama Canal, Bermuda and the Caribbean. They could often be found fishing along the coast of Maine and Florida as it was a favorite pastime.

She enjoyed walks, swimming and bicycle riding well into her 90s, as well as reading, crocheting and tending her flowers. She lived independently in her Sun City, Fla. condo until she was 99 years old.

Alice spent the last year and one-half of her life living with her daughter and son-in-law, Jane and Alden Badershall in Northport. She loved living in Maine again and being close to family. She continued to show her keen sense of humor daily with a twinkle in her eye.

She loved animals and especially adored her favorite dog “Mindy” who was her constant companion.

There will be a graveside service for Alice at 5 p.m., Sat., Oct. 1 at the German Cemetery in Waldoboro with Pastor Robert Dorr officiating.

To extend online condolences, light a candle for Alice, or to share a story or pictures, visit her Book of Memories at www.hallfuneralhomes.com.