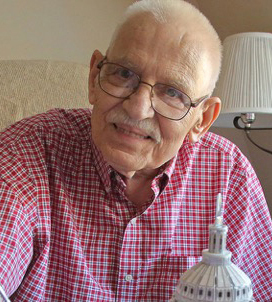 Alton Perry Swett, 87, passed from this life to the next on Feb. 13 at Chase Point Assisted Living Center in Damariscotta following a brief illness.

He was born on July 3, 1929, and raised in Boothbay Harbor, the son of Chester and Albertine (Shea) Swett. The love of all things nautical was instilled in him at a young age as he grew up in a family of fishermen; it was this love of the sea and coastal Maine that would bring him “home” in retirement where he enjoyed the seafood, the smell of the ocean, and the beautiful views that the rocky shores afforded.

Alton attended schools in Boothbay Harbor, graduating in 1947 as co- valedictorian of his class. His education continued at the University of Maine where he earned a bachelor’s degree in mechanical engineering, graduating in 1951. Upon graduation, he committed himself to what would become a fulfilling career working at the headquarters of Ingersoll Rand in Painted Post, N.Y.

Alton’s work took him to 38 U.S. states and 10 foreign countries where he would troubleshoot any and all issues related to the company’s compressors. When asked, he would share memories of dining on the Eiffel Tower, Paris; of being in Dallas, Tex. on the day of President Kennedy’s assassination; and of being in East Germany, then behind the Iron Curtain where he watched the lights go out at night while West Germany, on the other side of the wall, remained alight. He was faithful to Ingersoll Rand and proud of its products and service. He retired from the company, then Dresser Rand, while continued on in a consultant capacity for another few years.

In 1992 Alton and his wife Barbara returned to Maine where they built a new home in Newcastle and reconnected with life and people in Maine. Retirement also afforded Alton the opportunity to hone his woodworking and fine detail craftsmanship as he created detailed boat models, doll houses, airplane, train, and car models, along with numerous Noah’s arks that family members cherish.

Alton, a quiet gentleman, kept his mind active as he industriously deciphered directions and blueprints associated with any task he undertook. Additionally, he enjoyed antiquing, attending auctions, surfing E-bay, and most recently shopping on Amazon.

In addition to his parents, Alton is predeceased by wife, Barbara (Danforth) Swett, whom he married on May 12, 1951; they were married for 58 years prior to her passing in 2009; grandson, Allen Jacobi Swett; a very special brother-in-law, Frank Danforth; and special sisters-in-law, Eleanor Danforth, and Jean Goodfield and husband Alvin.

Arrangements for a memorial service will be announced at a later date.

In lieu of flowers, memorial donations may be made to The Lincoln County Animal Shelter, PO Box 7, Edgecomb, ME 04556.