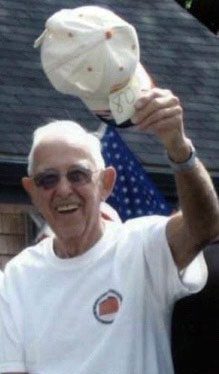 Alvah I. Moody, 92, passed peacefully from this world into eternity, to be with his Lord and Savior, on Feb. 8, 2020 at his home in Nobleboro.

Alvah was born in Waldoboro on July 17, 1927 to Percy B. and Bertha Maloney Moody. He was the third of their nine children.

Alvah grew up in Waldoboro working in the family business, Moody’s Diner, from a young age as the diner was established the year he was born. He loved the outdoors and was an avid hunter in his younger years. He enjoyed God’s creations, marveling at the beauty around him.

When he was 16 years old, his parents drove him to Portland to sign up for a delayed enlistment in the Navy. However, they were two men short of their quota and Alvah’s name was drawn from a list. He was off for Sampson, N.Y. for basic training. He always said, “My books were still in my desk at school.”

Alvah served on a sub-chaser where they soon discovered he could “cook.” He wrote home to his mother for recipes so the men had homemade cookies and birthday cakes.

Alvah started serving breakfast on a made to order basis for the men. His ship received an award for saving the most amount of money due to not wasting food.

After serving two years in the Navy, at the end of WW II Alvah came home. He completed high school while working at the diner. During this time, he met his first wife, Dorothy Aho. They were married on Feb. 19, 1950, and built a home in Waldoboro where they raised their three children.

Alvah was a hard worker. He built seven cottages, with the help of Dot, on Damariscotta Lake while working seven days a week at the diner. Eventually he would have Wednesdays off, at which time he remodeled his basement and started making mincemeat during the winter months for the diner and to sell in local stores.

He and Dot rented six of the cottages, living in the seventh one from June to October with their children.

In 1987, after winterizing the camp, he and Matthew moved there to live year-round.

Alvah met Georgetta Reed (with a little help from his sisters) in 1991; they were married in March 1992. After Alvah semi-retired from Moody’s in January of 1994, he and Georgetta spent winters in New Smyrna Beach, Fla. for 18 years.

In the spring of 2012, Alvah had health issues in Florida and ended up in the hospital. That was their last winter there as he was determined to “not die down here.”

Alvah spent his last years at the camp. Family was very important to Alvah, he loved having everyone at the lake. He would sit in his favorite chair with Trixie in the garage door, watching all the activities of his family and friends surrounding him.

He was an amazing man; he was kind and respectful to all and loved by many. He will be greatly missed by his wife, children, grandchildren, great-grandchildren, and those who knew him.

Visiting hours will be Saturday, Feb. 15, from 5-7 p.m. at Hall’s Funeral Home in Waldoboro. A celebration of life to be held on Sunday, Feb. 16 at 3 p.m. at the First Baptist Church of Waldoboro, 71 Grace Ave., Waldoboro.