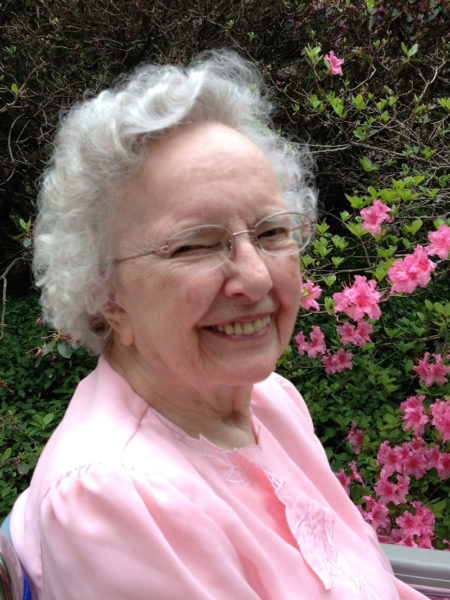 Amy Alexander, 91, died on Nov. 28 in hospice care at Bickford Cottage in Midland, Mich. She was born Oct. 31, 1925 in Portland to Dwight Lyman Turner and Ruth Conant Whitney.

Amy was raised in a little house by the ledges of Davis Stream in Jefferson with her three siblings. Her memories of those years gave her great joy throughout her life. She supported herself through high school in Portland by living and working at Amelia Williams Children’s Home, cleaning and taking care of the children. After graduation she worked in Portland for the U.S. Navy as a blueprinting assistant.

Amy went to Washington, D.C. and enrolled in the School of Nursing at St. Elizabeth’s Hospital. She was a member of the U.S. Cadet Nurse Corps until the end of WWII. She became a Registered Nurse in 1947 and earned her BS in Nursing from Catholic University in 1980. She worked at St Elizabeth’s Hospital as a ward nurse, ward supervisor, and after her BS, as a ward instructor until her retirement.

Amy married John Hoey of Denison, Tex., also a nurse at St Elizabeth’s, and raised four children in Silesia, Md. Mr. Hoey died in 1969. Amy was married to Thomas Alexander of College Park, Md., from 1990 until his death in 2013.

Amy was active in Oxon Hill United Methodist Church in Maryland. She taught CPR for the American Red Cross. She worked with the Boy Scouts of America as a den mother in the 1960s, and again in the 1990s. She was an accomplished artist, oil painter and sculptor. She painted her favorite oil painting in 1999 showing her sister Jeannette climbing the ledges.

Amy is survived by children, Cecelia Tillman of Kensington, Md., Catherine Yanacek of Midland, Mich., and Michael Hoey of Berkeley, Cal.; brother, Ralph Turner of Hollis; and numerous nieces and nephews, including Suzanne Hamilton of Jefferson; stepchildren, Lyle Alexander of Virginia, and Helen Nelson and Carol Fredericks of Maryland; as well as 17 grandchildren; and 10 great-grandchildren.