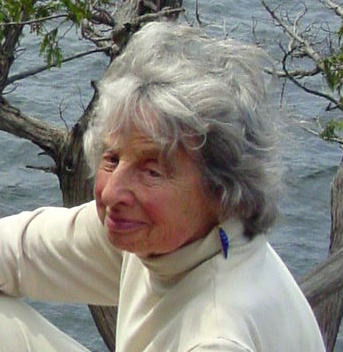 Anne C. “Nancy” Booth died peacefully at home in Newcastle on the evening of Nov. 3, 2020, after a brief bout with pneumonia. She was surrounded by nephew Steve Booth and her usual caregivers.

Born at home on May 18, 1922 in Wrightstown, Penn., she was the fourth of six children born to The Reverend Samuel Babcock Booth and Anna Peck Booth. They lived on a farm and built a chapel on the property that her father used for his mission ministry for area farm families. They moved to Burlington, Vt. in 1925, where Rev. Booth was called to serve as the bishop of the Episcopal Diocese of Vermont until 1935. Both at the farm in Pennsylvania and on the 50 acres of church land next to Lake Champlain where they lived in Burlington, Nancy and her siblings were home-schooled and could roam freely in a pristine natural setting where they learned to love the outdoors. The dog she had in Burlington at age ten was the first dog that was really hers.

Her father died of pneumonia in June of 1935, leaving Anna, Nancy (age 13) and three of her siblings with no house, a very small pension, and no plan. They stayed in Burlington for about a year, then stayed with or near friends and relatives for another two years. Nancy attended Peterborough (N.H.) High School, St. John the Baptist School (Mendham, N.J.), and graduated in 1940 from Lincoln Academy, in Newcastle, after her mother bought “Grey Rock,” a house on Pond Road, in Newcastle, that was to be the family’s home base for more than 40 years. After high school, Nancy started training as a teacher at the Lesley School in Cambridge, Mass., and graduated from Teachers’ College at Columbia University in 1945.

Nancy took a teaching job in Golden, Colo., where she fell in love with mountains. She returned to Columbia to get a master’s degree, and went on to more teaching in New Hampshire and Massachusetts before returning to Newcastle, where she established a nursery school at St. Andrew’s Parish. She returned to Massachusetts to teach in Newton public schools, and started attending Friends Meeting, in Cambridge. Quaker Meeting would be an ongoing affiliation for the rest of her life. She taught in Burlington, Vt., but returned to Maine when her sister, Ellen, died unexpectedly in January 1963. She was a teaching principal for a few years at Franklin Elementary School, in Newcastle, now the Franklin School Apartments.

The Midcoast Friends Meeting was a group she helped to start, and it became a vital connection point for Nancy. With friends from that group, she started an arts program called “Treasure Hunt” that traveled around to the schools in the area bringing art, theater, and music together, with Nancy heading the art effort. This program, funded by a federal grant, was renewed for three years, then picked up by the towns. It became Volunteer Teachers Resource Center, and invited retired, informed people to work in the schools. This was a program based on educational theory way ahead of its time, and she loved and put her heart into this project.

Nancy lived with and cared for her mother at Grey Rock until her mother’s death in 1981 at age 95. During these years, her mother took art lessons, made drawings of nature scenes that became increasingly abstract over the years, and turned the drawings into hooked rugs, many of which decorated the walls of the house Nancy bought on High Street in Newcastle in 1983. These rugs were prized possessions indeed, attesting to Nancy’s love of family, nature, and art.

Nancy was a member of the Sierra Club and a life member of the Appalachian Mountain Club. She had an opportunity to climb the Matterhorn when she was 50 and grabbed it with gusto. Locally, she was active in politics, belonging to the Lincoln County Democrats, and supporting issues such as peace and “no nukes.” She was an early organizer and volunteer at the Ecumenical Food Pantry, People to People (free clothing exchange), and CHIP (helping people keep houses safe, warm, and dry). She supported animal shelters, public radio, and was a frequent hiker on conservation land all over the Midcoast region and throughout New England. To mark her love of the land and its place in the history of her family and community, she donated a 17-acre tract of land on a hill above the original family house to the Damariscotta River Association in 1999, thus ensuring it would forever be protected and accessible to the public. This tract connects St. Patrick’s Church with the Damariscotta Mills Alewife Fish Ladder. Now known as the Mills Overlook, this land is managed by the Coastal Rivers Conservation Trust.

Nancy was able to live in her house on High Street until her death. She loved the sun spilling into the big room on the south side of her house, and she loved being able to look down the Damariscotta River. When the trees grew to block the view of the river, she didn’t complain but was grateful for the sun and the view of the trees.

Nancy is survived by her younger sister, Madeleine Booth Sweet, of Falmouth; by ten nieces and nephews, children of her brother Robert, her sister Katherine, and her sister Madeleine; by 18 grandnieces and nephews; and by many great-grandnieces and nephews. These relatives live all over the country, from Maine to Wisconsin to Washington, and Virginia to Texas to California. Her nieces and nephews remember childhood visits with Aunt Nan as special events — you never knew what unusual project or adventure she would start. She took family on the swan boats in Boston, rowboat picnics on Damariscotta Lake, hikes and camping trips all over New England, and taught many of them to ski. The next generation remembers her as very sweet and kind, sending notes and birthday cards until quite recently, and also as unpredictable, a little crazy in a good way, and always taking them on walks with her dog.

In addition to family, she leaves many very good friends at the Midcoast Friends Meeting, who remember her as a tireless volunteer, able to out-climb hikers 20 years her junior, able to connect with strangers quickly and easily, and as an inspiring mentor. She was certainly a big part of many lives with her indomitable spirit, generosity, and ongoing quest for the next trip or good time. She will be missed very much by those who knew and loved her.

There will be a virtual memorial service at Midcoast Friends Meeting. When the date and time is determined, it will be posted on the website, midcoastfriendsmeeting.org.