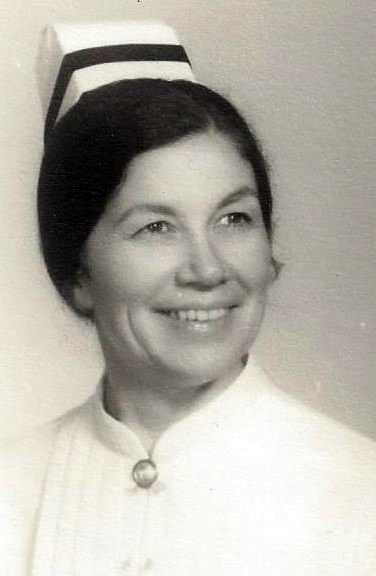 Annette Dolores Carbonneau died peacefully, surrounded by her loving family, at the home of her daughter Dolores in Alna, on May 12, 2020.

Any accounting of Anne’s life should begin with her devotion to her family: to her husband, Richard W. Carbonneau Sr., and to their nine children, Richard Jr., Kathleen, Suzanne, William, Eileen, Dolores, Annette, Charles, and Patricia. Anne was raised in a family of nine children, and she had decided from an early age that she would like to raise her own equally large and loving brood.

Her husband Dick was enterprising and industrious, and his work and service to his country had them moving frequently, leaving Anne much of the responsibility for raising their children and keeping their home. But her own sense of purpose and resourcefulness became manifest as soon as their youngest child was in kindergarten. With her children still at home and her commitment to motherhood undiminished, Anne returned to nursing school at Central Maine General Hospital (now Central Maine Medical Center). The story of her accomplishment in graduating from nursing school while raising nine children was the subject of a feature article in the Lewiston Sun Journal in 1975. Nor did her education stop there. While working full-time as a nurse, Anne went on to earn a Bachelor of Science in Nursing from St. Joseph’s College in Windham; a Master of Science in Nursing from The University of Southern Maine; and a graduate nursing degree from Anna Maria College in Paxton, Mass.

She was born Annette Germaine Dollaress Martel on Feb. 15, 1930 in Biddeford. The seventh of her parents’ nine children, Annette was raised in this French-Canadian community, and her family spoke French exclusively at home. Her parents, Charles Joseph Martel and Alphonsine Remillard Martel (née Hebert), had immigrated to the United States from Quebec, Canada. Her mother worked in textile mills and her father was a woodsman and lumberjack.

The years of the Great Depression exactly encompassed her childhood, and as a teenager, she anxiously watched as her beloved uncle and older brothers went off to fight in the Second World War. The only member of her family to complete high school, Anne graduated as valedictorian of her class at St. Joseph High School, and she went on to nursing school at Mercy Hospital in Portland. In her last year of nursing training, she met and married Richard. At that time, married women were not allowed to study at Mercy, and she was forced to withdraw from her studies. She worked, instead, as a certified nursing assistant in the first years of her marriage and parenthood, until the growing family made that impractical.

The marriage of Annette and Richard was a profound love story. They met while on a double date – but they were not each other’s dates. It was love at first sight, however, and Dick called Anne the next day. They became engaged after only five weeks, and they were married on Feb. 3, 1951 in St. Joseph Church in Biddeford, where Anne had been baptized. And what had been instant love grew into perpetual love. On their 50th wedding anniversary, they renewed their vows in the church in which they had been married, and they remained deeply devoted to each other for the 68 years of their marriage. Until his last days, Dick was constant and effusive in expressing his love for Anne, and Anne’s love for Dick continued even after his passing in 2019. Over the years of their marriage, they lived in Washington, D.C.; Wheaton, Md.; Rockville, Md.; Lewiston; Saco; Lexington, Mass.; New Carrollton, Md.; North Fort Myers, Fla.; Fort Myers, Fla.; Old Orchard Beach; and Portland.

Raising her children was the accomplishment that meant the most to Anne. She instilled in them firm moral centers, a commitment to education, as well as profound devotion to each other. She modeled industry, thrift, and hard work. She made many of their clothes, which she also washed and mended. She cooked on a near-industrial scale, baked bread, and packed school lunches in volume. As a child herself of coastal Maine, Anne nurtured a love of the ocean in her children, and she regularly took them on outings to the beaches of Saco Bay. She read to her children, took them to the library, and she made sure that there were books and encyclopedias in the house. Along with her husband and children, she enjoyed playing cards and entertaining.

Anne was devoted to her faith and to her church. She was a member of the Sodality of St. Patrick Church in Lewiston, the parish where her children attended school.

As her children became more self-sufficient, Anne worked first as a nurse at Central Maine General Hospital, and then as an instructor at CMG School of Nursing. She went on to specialize in psychiatric nursing at United States Veterans Administration hospitals in Togus; Waltham, Mass.; and Washington, D.C. It is fitting to note that Anne died on International Nurses Day.

Upon their retirements, she and Dick moved to North Fort Myers, Fla., where they lived for 19 years. There, she sang in choruses, did genealogical research, painted, and knitted baby caps for a local hospital. She and Dick enjoyed traveling in the United States and abroad. They also delighted in their 13 grandchildren, Nicole, Caitlin, Casey, Brady, Patrick, Abigail, Nicholas, Sarah, Timothy, Sophia, Dean, Leo, and Molly; and five great-grandchildren, Stella, Jack, Felix, Alexis, and Bradley.

In 2010, Anne and Dick returned to Maine, where they lived in Old Orchard Beach, and later in Portland.

A mass of Christian burial will be celebrated in the future at St. Joseph Church in Biddeford, where Annette was baptized, confirmed, and married. Interment will take place at St. Joseph Cemetery.