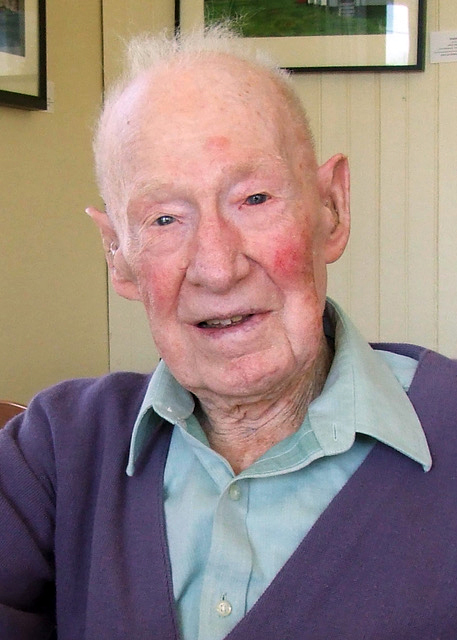 Arthur Everett Jones, 100, passed away on the afternoon of Monday, June 11 at the LincolnHealth – Miles Campus in Damariscotta. Arthur was born in Damariscotta Mills on April 3, 1918, the son of Melrose Jones and Eola Jackson Jones.

He lived his whole life in Nobleboro, graduating from Lincoln Academy in 1937, except for four and a half years of service during WWII. He served with the U.S. Army Air Corps in the Pacific theatre as part of a ground crew working on consolidated B-24 heavy bombers.

He married Faith Raddin in 1947, and moved to his current residence in 1953. He worked as a lineman for Central Maine Power Company for 30 years, and also had his own electrical business.

He was a member of the Grange, the Masons, and the American Legion for over 50 years. He was also a charter member of the Nobleboro Historical Society. He attended the First Baptist Church of Nobleboro for many years.

Arthur was the recipient of the Boston Post Cane for Nobleboro at age 98.

Besides his parents, he was predeceased by wife, Faith; son-in-law, Mac McCuller; and sisters, Mellicent Ball, Ruth Applin, and Elizabeth Norburg.

A small graveside service with military honors was held June 16 at the Highland Cemetery in Nobleboro.

In lieu of flowers, donations in Arthur’s memory may be made to the First Baptist Church of Nobleboro, PO Box 35, Nobleboro, ME 04555.