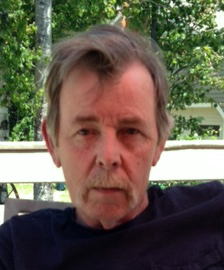 On July 3, 2021, Arthur Lee Gillespie lost his ongoing dispute with the Marlboro Man. He left peacefully from his home in Dresden, with his grandkids playing in the background, his faithful dog Bleu lying by his side, and surrounded by many of those who loved him. Lee died well.

He was born in Newport News, Va. in 1954. As a young man he went on to join the Coast Guard, which would eventually land him in Maine. In the Coast Guard he learned the trade of a marine mechanic, which became his lifelong career. Lee started his own business in the late ’80s and was well known among the fishing community from Boston to Lubec. Some would say he was an acquired taste, but none would dispute his ability to turn a wrench or troubleshoot mechanical problems. Lee was generous with his vast knowledge of marine engines, and the Gillespie School of Marine Mechanics includes many local graduates. Mike, Scott, Josh, Larry, Zach, and Dave all managed to graduate despite the instructors’ unorthodox teaching methods and sometimes ornery disposition.

The rangers, wardens, and deer population at large can all rest a bit easier tonight knowing that Lee Gillespie has officially retired from his favorite pastime of hunting. Prior to his retirement he was sure to gift lifetime hunting licenses to all eight of his grandchildren, to assure that the tradition would continue.

Lee was a “go-to guy” when it came to the tough shot on the hunt. With a keen eye and a steady hand, he was once rumored to have made a 1,000-yard kill shot. As many of his fisherman customers could contest to, Lee was nearly impossible to contact or locate during the month of November due to his love of the hunting season.

In his later years, Lee enjoyed his time at camp, spending time with his grandchildren that he adored and sharing old stories about the glory days. Some of the stories were true.

Lee was like one of those tough, old lovable dogs that we have all known. The kind that barks and snarls if you wander into his yard uninvited. Once determined that you are a friend, licks your hand, wags their tail and offers you their very best toy. Committed to family and friends, willing to stand their ground and protect, fearless, with unconditional love. It is those kinds of old dogs that are the best to have around.

And it is those old dogs that we always seem to miss the most when they are gone.