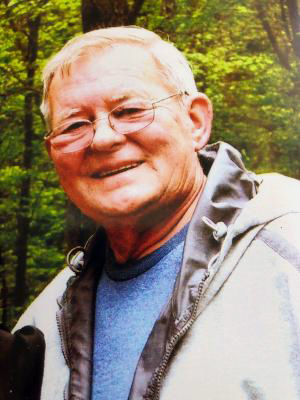 Arvine “Arnie” Orff came boldly into this world on Feb. 19, 1931 in North Waldoboro, and left quietly on Feb. 10, 2019 in New Haven, Conn. He bravely battled to stay with family and friends, but could no longer find the strength to be without his beloved wife, Elsie.

Arnie was the fourth son of Ruel and Edith (White) Orff and then spent his first 19 years in Maine and in 1950, he left for Connecticut to find steady work and better opportunities. Six months later he returned on a Greyhound bus, engagement ring in hand, and asked to marry the pretty Bremen girl he had left behind. They returned to Connecticut together to spend their lives making a home in Branford and raising their family.

Arnie worked hard his entire life. As part of a family of 12 children, he mastered a wide variety of jobs. He did chores on his family’s farm, raising vegetables and weeding in the garden, repairing trucks, cars, and farm equipment, and caring for his six younger sisters. He logged trees with his father and split wood. He worked at a local poultry farm, apprenticed for the town blacksmith, delivered Maine lobsters to Boston, and cut timber at a local saw mill – all before the age of 18.

When he first arrived in Connecticut, he worked at C. Cowles, Inc. in New Haven and then found work as a mechanic in a small garage in Branford. He then moved on to work for the original Wilson Ford Auto Company from 1955-1972, working his way up to the position of head mechanic. Never idle, he carried multiple side jobs to support his family including cleaning parking lots in the warmer months and plowing snow in the winter. He became the senior mechanic and maintenance technician of Connecticut Blue Cross-Blue Shield of North Haven, Conn. until his retirement in 1992.

He was a true Renaissance man. He redesigned and renovated his house, loved animals and the outdoors, invented and fabricated tools, sang constantly, and kept his family laughing and on their toes whenever he was with them. He loved to cook and often made apple pie, tomato sauce and sour cream coffee cake for visitors to his home.

A very important part of Arnie’s life was his love of airplanes and flying. Older brothers Kenneth and Richard fought in WWII and after his retirement, he and Elsie traveled the world visiting many historical sites in Europe. He studied all the famous air and sea battles. His primary hobby was building and flying beautiful model airplanes. He was a proud member of the East Coast Swamp Flyers of North Branford for over 40 years. His favorite story was of an exciting glider ride where he experienced a wide variety of maneuvers, including a full loop the loop, and felt “free as a bird” while soaring through the air.

Until his death, Arnie deeply mourned the March 19, 2017 loss of his beloved wife, Elsie McLain Orff. She was the love of his life and his best friend. He was extremely proud of and close to his entire family, spending countless hours with daughters Linda Baccki (John) of Arlington, Vt., and Rosemary Bourne (Richard) of Branford, Conn. and talking by telephone every day to his extended family and friends. He mastered and enjoyed texts to family, keeping them updated on his daily adventures. He enjoyed playing cards, telling stories of his life experiences and preparing delicious meals for guests.

He especially adored his grandchildren, Dawn Baccki Hoyt (Fred) of Arlington, Vt., Keith Baccki (Deborah) of Needham, Mass., Richard Bourne IV of Branford, Conn., and Danielle Bourne of Groton, Conn. He relished his visits with his great-grandchildren, Clay, Veronica, and Chase. He spent a wonderful day during the holidays with them playing Wii and card games, telling them jokes and stories, and enjoying a great meal together. He often reminisced about that day during the weeks before his death.

Arnie remained close to his family in Maine throughout his entire life. He missed his Maine family and often traveled to visit sisters Darlene Hale (“Brother” Tom), Rayetta Simmons, Pat Cross, and Judy Westman. He particularly enjoyed family reunions when he could reconnect with his many nieces and nephews and tell them stories about their relatives and the Maine in which he grew up. He loved to relentlessly tease his sister-in-law of 67 years, Celia Ramsdell.

Arnie had many friends and loved his relationships with them. He was especially fond of his “substitute” son Chris who built and flew model airplanes with him, Mark of Branford Hobby, “little brother” Sean who kept a steady eye on him and helped around the property, and coffee buddies George and Frank. He greatly respected his generous, caring neighbors Bobbie and Terry and always enjoyed his conversations with them.

Arnie had many health challenges in his later years and became convinced that he had experienced a spiritual connection during a serious surgery when his heart stopped for several minutes. That event inspired him to write a memoir for his family about the many times in his life where he felt that “miracles” had saved him. The result was the publication of a small book entitled “I Touched the Hand of God,” in which he described his early life and how it formulated his spiritual belief system. As a result, his family and friends will always have his words to keep him close every day. We are comforted that he felt he would join his many loved ones waiting for him as he passed on and again, “touch the Hand of God.”

Arnie will be terribly missed and remembered with great love by his family and friends. Any memorial contributions should be directed to his favorite charity, St. Jude’s Children’s Hospital, in his memory.