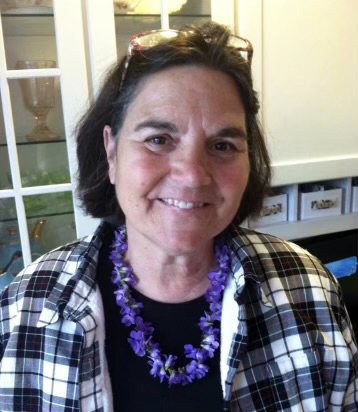 Barbara Zucchi died peacefully in her Jefferson home on June 15, 2022.

Barbie was born at Miles Memorial Hospital on Nov. 21, 1949 to the late Phyllis and William Zucchi. She was predeceased by her parents and her sister, Adele Ames. She is survived by her husband of 52 years, Donald, and their two daughters, Darcy Johnston, and her husband, Poly Collins, of Searsmont, and Erika Johnston, and her husband, Jason Rich, of Hallowell; her grandchildren, Stella Collins, of Searsmont and Elliot, and Azalea Rich, of Hallowell; her two stepchildren, Greg Johnston and his wife, Mary, of Jefferson, and Deborah Johnston, of Rhode Island; and step-grandchildren, Rachel Johnston, of Washington, D.C., and Andrew Johnston of Jefferson. Barbie is also survived by her sister, Carol Zucchi, and Carol’s husband, Carl, of Waldoboro, as well as her brother-in-law, David Ames, of Northport.

Barbie grew up in North Waldoboro and graduated from Waldoboro High School in 1967 and the University of Maine with a BA in 1971. She worked in the United States Postal Service for 30 years, serving as postmaster in Jefferson and Waldoboro. Among her other duties, she acted as a postmaster trainer, an Integrated Retail Terminal Coordinator, and an Equal Opportunity Counselor which required that she fly or take ferries to many Maine islands including Cliff, Islesboro, Matinicus, Monhegan, North Haven, and Vinalhaven, opportunities she greatly enjoyed.

She also found time to volunteer as a member of the Waldoboro Lion’s Club. Barbie, her mother, and her sisters loved planning and hosting gatherings for family and friends. These involved elaborate meals, games, crafts, and performances. Barbie was a consummate chef. When not devoting herself to her family and work, Barbie found time to enjoy traveling with loved ones. Beginning in 2012, Donnie and Barbie established a second home for themselves on Campobello Island in Canada. Some of her fondest memories were of travels to Fourth of July celebrations, from the parades in Thomaston, to music and fireworks at Mt. Rushmore, and family trips to Boston for the Boston Pops and fireworks celebration at the Hatch Memorial Shell. Most recently, she enjoyed taking in the fireworks display over Eastport from Bertha’s porch on Campobello.

Family and friends are invited to a get-together for Barbara at 2 p.m., Sunday, July 24 at Maple Hill Farm Inn and Conference Center, 11 Inn Road, in Hallowell.

Memories may be shared online at ripostafh.com. Those who wish may make donations in her memory to MaineHealth Care at Home (indicate Hospice Charity Care) (mainehealth.org/MaineHealth-Care-at-Home/Ways-ToGive/Online-Donation); or the Ashley Bryan Center, P.O. Box 263, Islesford, ME 04646 (ashleybryancenter.org/donate.html).