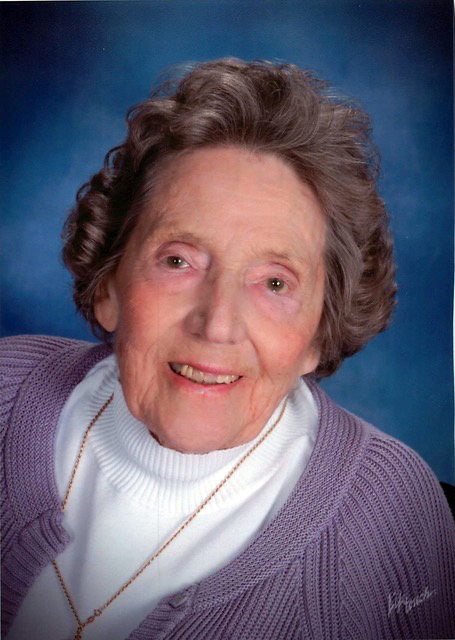 Betty Johnson’s life ended during the early morning hours of Friday, June 9, 2017, at  her home in Damariscotta, Maine.  Born December 31, 1921 in Milford, Connecticut, she was the only child of Harold F. and Jeannette (Washburn) Woodruff.

Her early years revolved around the Woodruff Farm which developed and marketed seeds nationally. The animals and activities at the farm instilled in her a respect of the natural world and its animals.

Her education included Roger’s Hall, a preparatory school in Lowell, Massachusetts; graduating in 1939.  An interesting event occurred while returning to school on September 21, 1938 during the “Hurricane of the Century”; Betty was on the train in Watch Hill, Rhode Island, ground zero of the storm’s landfall.  Followed by Bradford Junior College of Bradford, Massachusetts in 1941.

Initially, employment began as a secretarial assistant at the Roger’s Hall school.  With the outbreak of WWII, Betty returned to Milford, Connecticut, working for the Bureau of Military Information at Yale University.

The Cold War found Betty as a volunteer airplane spotter for hostile aircraft in Woodbridge, Connecticut.  Fifteen years at the Milford Hospital Volunteer Services gave Betty many hats to wear.  Also, tenure as an assistant at the Orange Nursery School which was associated with the Orange Congregational Church of which Betty belonged for many years.

Moving in 1983 to Damariscotta, settling in, she joined the Second Congregational Church of Newcastle where she served as Deacon, and was active in Women’s Club activities.  Betty served on the Board of Directors at Miles Hospital.

Years accumulated, infirmities multiplied, tenacity prevailed, until Friday last.
In addition to her parents, she was predeceased by her husband of more than forty-nine years, who died in 1995; and a son, Daniel A. Johnson who died in 2011.

Betty will be remembered among many other things for her generous spirit, and loving kindness toward all her family and many friends.  She had  a quick wit and sense of humor that served her well until the end.  She was devoted to her dogs Mac and Duff, Woody and Wendy, and all the creatures right outside her door. She was grateful to be able to spend her days at home on the Damariscotta River watching the tide go in and out.

Betty’s family would like to thank Cindy Hagar, and her indispensable caregiving team, for their loving care and support to Betty the past several years.  They would also like to thank Miles Home Health & Hospice for their help in her final days.

Relatives and friends are invited to join the family for a memorial service to celebrate Betty’s life at 2:00PM on Saturday, June 24, 2017 at the Second Congregational Church of Newcastle, 52 Main Street, Newcastle, Maine.  Should friends so desire, donations may be made in Betty’s memory to the LincolnHealth-Miles Campus, ℅ of the Development Office, 35 Miles Street, Damariscotta, Maine 04543.

Arrangements are under the direction and care of the Strong-Hancock Funeral Home, 612 Main Street, Damariscotta, ME 04543.  Condolences, and messages for her family, may be expressed by visiting: www.StrongHancock.com.