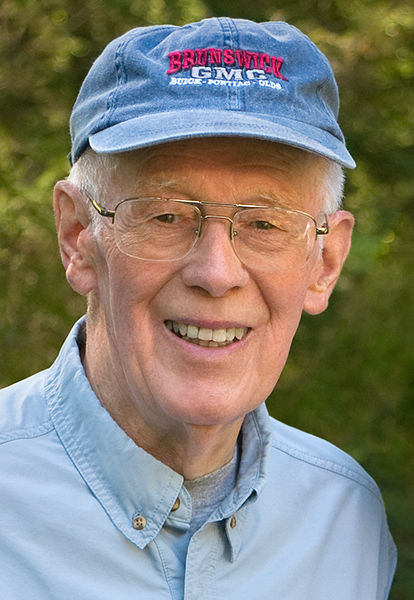 Calvin Austin Cromwell, 89, of Westport Island, passed away peacefully after a brief illness at Mid Coast Hospital in Brunswick on July 19, 2022, with his family at his side.

He was born on Dec. 3, 1932, to Herbert B. Cromwell Sr. and Frances A. Cromwell in their farmhouse on Westport Island. He was the second of seven children and graduated from Morse High School in 1950.

After working as a carpenter and electrician, he became an apprentice machinist at Hyde Windlass. In 1952 he joined the Air Force and was assigned to the 6200th Field Maintenance Squadron at Clark Air Base in the Philippines. Returning to Maine, he began work at Bath Iron Works as a machinist and retired 36 years later as machine shop production foreman, with friendships that lasted the rest of his life.

He met Joanne Garland when she walked into his father’s general store and told a friend she’d just seen “the most handsome man I’ve ever met.” They married in 1963 and raised three sons, spending their days gardening, boating, and fishing. Always the handyman, he built the cabinets in their home, a treehouse and go-cart for his sons, and a skiff for his wife. They were married 59 years.

Cal retired in 1995, but he never slowed down. He enjoyed air shows, trips to St. Andrews, spending winters in Punta Gorda, Fla., and meeting people he knew wherever he went. He could always be found at his brother Frank’s workshop, where together they restored antique cars and trucks. Willys CJ-2A Jeeps were his great love, and he fully restored three of them and gave them to his grandchildren and niece. With his own Jeep he enjoyed plowing snow for neighbors with his dog Barney standing on the hood.

He served as Chairman of the Westport Planning Board and was a member of the Lincoln Lodge No. 3 AF&AM and the American Legion. Every Memorial Day, for 40 years, he put flags on all the veteran graves on the island. Throughout his 70s he worked with a small crew who spent every Friday morning restoring forgotten cemeteries by clearing brush, repairing headstones, and mending fences.

He was always ready to help a neighbor and to give a kind word, always calm and clear, and a wonderful father and friend.

He was predeceased by his sister, Virginia Anderson; and brothers, Francis Cromwell, Herbert Cromwell Jr., Judson Cromwell, and Charles Cromwell.

A private family service will be held at St. Patrick Cemetery in Newcastle at a later date.