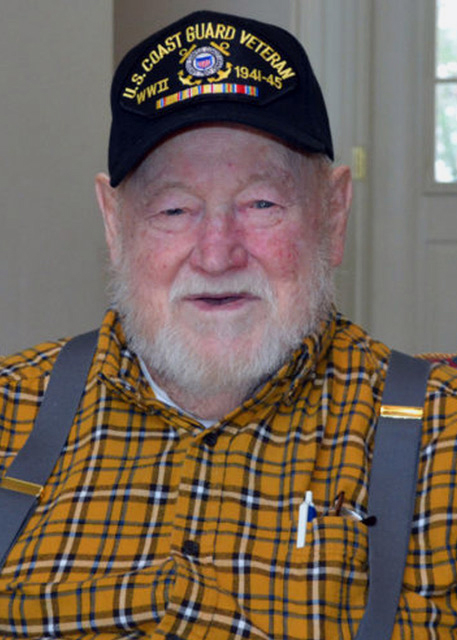 Eugene grew up in Missouri, attending schools and graduating from high school there. He worked for several years, but with jobs hard to come by during the Great Depression, he and his buddies all joined various military branches.

Casey chose the Coast Guard in 1941 and after basic training, his first assignment was the USCGC Campbell in the north Atlantic, working convoys. During this time, the Pearl Harbor bombing occurred. His sharpest memory of event was being a radioman and being asked to announce to the crew the bombing and the U.S. entering WWII.

He served in three quadrants; the North Atlantic, the Mediterranean, and the South Pacific. He served over the years on many ships as commander and later as captain. His last adventure as sea was taking the ice breaker Staten Island over the Arctic Circle, escorting the Exxon Manhattan along with the Canadian icebreaker McDonald from Alaska to the Atlantic. This trip circumnavigated North America; a nine-month adventure.

In 1966 he was named captain of the South Portland base where he served until 1968. While in South Portland, he commissioned the new Coast Guard station in Boothbay Harbor. His final command was as chief of staff of the 9th District, from which he retired in 1973.

He retired to Arizona, then to Washington state, and eventually made his way back to Maine, where he resided for the last 15 years. While living in Newcastle, he was awarded the Boston Post Cane as the town’s oldest resident in 2015. He was a life member emeritus of the HoHoKam in Mesa, Ariz., and for the past few years was an active member of the USCGC Campbell Association which he cherished dearly.

He is survived by his sons, Jim (Gaile) Walsh of Loomis, Wash., and Dennis (Marie) Walsh of Newcastle; daughter-in-law, Janice Walsh of Olalla, Wash.; granddaughters, Tracy (Greg) Benson, and Catherine Walsh; great-granddaughters, Dhakiya Walsh, Zakiya Walsh, and Molly Benson; as well as many beloved nieces and nephews of the Curtis family.

A service, with Coast Guard honors, will be held at 10 a.m. Thursday, Aug. 29 at St. Patrick’s Church in Newcastle. His ashes will be laid to rest in the Atlantic Ocean, off the coast of the Portland Headlight.

In lieu of flowers, donations may be made to either Honor Flight Maine (which he and his son were a part of this past April), PO Box 1770, Portland, ME 04104; or the Coast Guard Mutual Assistance CGMA, 1005 North Glebe Road, Arlington, VA 22201 (cgmahq.org/give.html).