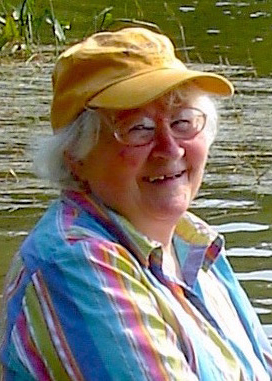 Carol Adams slipped her last mortal bonds and passed away peacefully on Dec. 4 at Chase Point Riverside in Damariscotta.

She was born Martha Caroline Brown on Jan. 8, 1928, in Lakewood, Ohio, the third child of Edna (Toudy) and Clarence Brown. She graduated from Lakewood High School (where her hobbies included fencing and bagpipes), and attended Mount Holyoke College, graduating in 1950 with a BA in philosophy, with graduate courses in management, personnel administration, and public health. During college she studied abroad at the Folk School in Denmark, and later took time to hitchhike through Europe before returning home.

Back in Cleveland, while working as assistant to the Regional Director of the Foreign Policy Association, she met her husband, Rev. Eugene H. Adams. Gene shared her passion for social justice issues, and they wed in 1956. Over the years they moved as he served Unitarian-Universalist congregations in Orange and Worcester, MA; Jamestown, N.Y.; and finally Medford, Mass. They lost a first child, Sam, shortly after birth, but raised two sons, Richard and John, who survive her.

Even in the role of housewife, mother, and minister’s wife, Carol held a deep commitment to social justice and activism. Throughout her life she openly tackled important issues of the day, including civil rights and race relations, opposition to the Vietnam and Iraq wars, women’s rights, access to birth control, abortion rights, nuclear arms control, Native American affairs, workers’ rights, elder issues, LGBTQ rights, and marriage equality. To make her voice heard she participated in numerous demonstrations and marches, not only in her own town, but in Washington, D.C., New York, and Seabrook, N.H.

In mid-life she returned to the workforce, first as an administrative assistant at the Unitarian Universalist Association in Boston, and later for Tufts University’s Experimental College program.

Her commitment to racial justice led her to become, at age 50, the first, full-time Affirmative Action Officer for the City of Medford, Mass. For her work she was awarded the Martin Luther King citation by the Medford Branch of the NAACP, and received special commendation by Medford City Council. She then went on to become Affirmative Action Officer for the neighboring town of Arlington. Her affirmative action career continued at the state level, working for the Massachusetts Bureau of Public Information and Recruitment as an employment specialist responsible for minority employment, counseling, and training. She was promoted to assistant supervisor for the Massachusetts Office of Equal Employment Practices, supporting and increasing representation of women, minorities, and the disadvantaged in state employment.

She remained active following her retirement, working as secretary for the Community Church of Boston, tutoring adult ESL students, and volunteering as an “AIDS Buddy” for an AIDS service organization. In 1995 she was a fact-finding observer in Haiti, which remained a highlight for her.

Carol loved music, art, nature, and social activism, and filled her free time with all of these. She attended operas and concerts, explored the Middlesex Fells Reservation, canoed the Concord River, swam in Wrights Pond and the Atlantic Ocean, and puttered in her garden. She had a special interest in Native American affairs and culture, researching local Native American history and seeking out local and national organizations devoted to Native American issues. She remained active in many social justice organizations including the League of Women Voters, NAACP, and ACLU, Medford Council of Churches, Mystic Valley Eldercare, Association of Affirmative Action Professionals, Civil Liberties Union of Massachusetts, and the Massachusetts Commission Against Discrimination.

Shortly before her husband’s death in 2004 Carol showed early signs of dementia. Under the care of her son John, she entered assisted living, eventually moving to Maine, first to The Highlands and finally to Chase Point in Damariscotta where she lived for the last 10 years.

No memorial service is planned.

Arrangements are under the direction and care of the Strong-Hancock Funeral Home, 612 Main Street, Damariscotta, ME 04543.