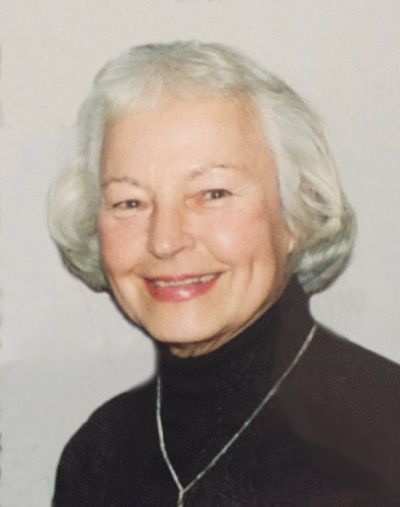 Carol Haase Cook, 90, a city girl who embraced country life; an avid sailor; an incomparable seamstress and cook; a lifelong advocate for religious tolerance, Civil Rights, and women’s rights; and a devoted wife and mother died on Dec. 29. She lived the last 10 years of her life in Waldoboro with her youngest daughter, Margaret, and died at home there.

She was born June 11, 1926, in Chicago, Ill., to Margarita Binder Haase and Carl Odenwald Haase. When Carol was one, her father, an engineer, was asked to help Japan’s Nippon Electric Company (now NEC) develop its electronics capabilities — so for the next three years, Carol and her parents and older sister, Betty, lived in Tokyo. Carol retained memories of hikes up Mount Fuji and of the family’s voyage home, including a 16-day trip on the Trans-Siberian Railroad.

After their return to the U.S., they settled in Baltimore, Md. Her parents divorced when Carol was eight, but her father remained a strong presence in Carol’s and Betty’s lives — teaching them to sail and ski.

Carol graduated in 1944 from Baltimore’s all-girls Eastern High School, where she was student council president, on Baltimore’s Inter-High School Congress, in the glee club, and on the yearbook and literary journal. She went on the University of Maryland, where she was business manager of the school paper, in Mortarboard leadership society and Phi Kappa Phi scholastic society, president of Kappa Delta sorority, Queen of the May, and winner of the B’nai B’rith Award for founding the university’s interfaith council. Upon her graduation in 1948, she received the Senior Citizenship Prize.

Later that year, she married William Randolph Wilson, a dentist, and taught reading, hygiene, and home economics until the birth of daughter Dana in 1951. In November 1952, Bill Wilson died of a heart attack. A few months later, Carol met David Herrick Cook, and they were married in Baltimore in November 1953. David immediately adopted Dana, and four more children — Louise, Dave, Andy, and Margaret — came along between 1954 and 1963.

In 1954, Carol and David settled in Washington, Conn., where David established his own business tuning and restoring pianos, while Carol managed the business’s financial aspects.

Carol also served at various times as president of the Washington League of Women Voters, a Connecticut delegate to the national League convention, vice chair of the Washington School Board, chair of the PTO, a Cub Scout den mother, and a director of the Washington Visiting Nurse Association. She was active with the First Congregational Church, too, including as a deacon and trustee (and the first woman trustees’ chair). She and David also became life members of the NAACP in the mid-1960s.

At the same time, they led the family in a farming enterprise encompassing a one-acre vegetable garden, half a dozen Guernsey milkers, a couple of beef cattle, plus chickens, bees, horses, sheep, pigs, goats, turkeys, and ducks. They were adherents of organic farming and healthful eating as far back as the mid-1950s and for years raised nearly all their own meat, eggs, and vegetables; made their own yogurt, butter, and cheese; and sold organic eggs and milk.

Carol also found time to sew beautiful hand-smocked dresses for her daughters; supervise the making of prize-winning Halloween costumes; and put three delicious, nutritious meals on the table every day. In addition, she and David made time for regular family picnics, hikes, sing-alongs, and reading-aloud sessions.

After the children were all in school, Carol went back to school herself, earning a master’s degree at Western Connecticut State University and then teaching for several years at Shepaug Valley Regional High School.

In 1986, she and David retired to a remote 65-acre peninsula on a tidal river in Harrington. For 21 years, they gardened, raised ducks and chickens, and sailed (a passion dating from childhood for both of them), plying their 31-foot sloop, Halcyon, along the Maine coast. They were active in the Petit Manan Yacht Club and Harrington Snowmobile Club, and Carol served on the Harrington Family Health Center’s board.

In 2007, with David’s memory and Carol’s mobility failing, they (and their dog, Bailey – the last in a long line of much-loved dogs) moved in with their daughter Margaret in Waldoboro. Carol celebrated her 90th birthday in June, after which her physical and cognitive condition began to decline.

Carol was predeceased by her beloved David in May 2013, and by her parents and sister.

Carol’s ashes will be interred in Washington, Conn., Cemetery in the spring.

In lieu of flowers, the family suggests donations to the Ark animal shelter in Cherryfield (http://thearkpets.org) or your local animal shelter.