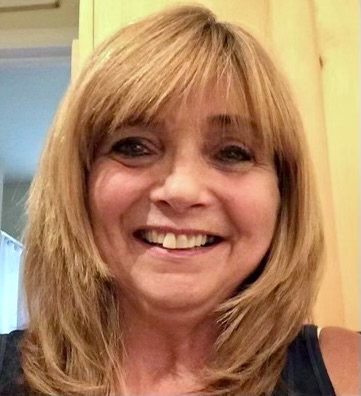 Catherine “Cathie” Baker Adams, 62, of Northport, died May 24, 2022 at Waldo County General Hospital after a valiant battle with COVID-19.

Cathie was born in Peekskill, N.Y. on March 6, 1960 to Aurore B. Boucher Adams and David Ward Adams. She was third oldest of eight children and spent most of her childhood in southern Maine. She attended Thornton Academy and completed her GED through Penobscot Job Corps Center, graduating there as “Student of the Year.”

Cathie attended University of Maine in her later years but primarily was self-educated with a focus on new age spirituality. She followed this calling for most of her life, attending conferences and reading books based on this principle. By becoming an ordained minister, Cathie was able to officiate the wedding ceremonies for two of her siblings.

Though she had held several meaningful jobs, Mid-Coast Mental Health Center being a notable one and as a recovery coach at the Re-Entry Center in Belfast, she is best known for her passion as an intuitive healer. Her work with past life cards and her well loved deck of tarot cards brought countless people insight and comfort into their own lives. She was also deeply drawn to crystals and their healing powers, astrology and numerology, as well as laughter therapy.

Beyond her spirituality, Cathie had creative talents. She was an excellent photographer, published poet, and loved to draw and to play the guitar.

Cathie is survived by her beloved daughter, Jessica Breithaupt and her fiance Tyler York, of Damariscotta; and her amazing grandson, Abraham Guilford. She is also survived by her brothers and sisters, David Adams, Jane Adams, John Adams, Chet Adams, Becky Corley, Mike Adams, and Dot Adams and their spouses; as well as countless nieces and nephews. Along with big family, Cathie had many dear friends from all walks of life that she has left behind. She had a particular love for her friends at NA and AA, working the steps in substance use recovery. Her heart was big, and her love, light, and laughter will remain in the souls and lives of so many who knew her.

There will be a celebration of life ceremony for Cathie at 1 p.m., Saturday, June 18 at the Unitarian Universalist Church, 37 Miller St., Belfast. Please wear light colors or pastels; yellow and white were Cathie’s favorites. Instead of flowers the family asks, if you are so moved, to donate to either The Maine Regional Reentry Center at voanne.org/maine-coastal-regional-reentry-center or The Scoliosis Research Society at srs.org. June is Scoliosis Awareness Month.