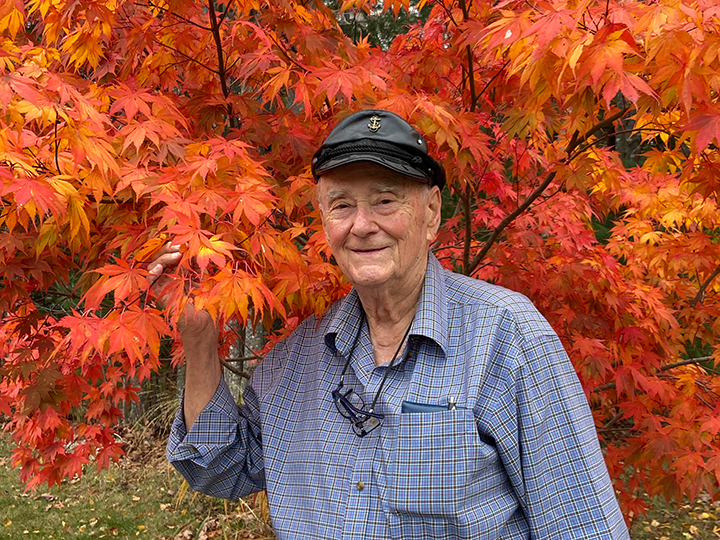 Charles Leslie Frederick, originally of Arlington, Mass., died peacefully at his home in Topsham on April 16, 2022 with family at his side. He was 90 years old. His restful passing served as a quiet reflection of the deep and thoughtfully reserved nature with which he lived his life.

Les, as he was known to all, was born in Dorchester, Mass. on Oct. 22, 1931 to Charles Frederick and Alice Vianello. As an only child coming of age during the Great Depression and WWII, Les grew up assisting his parents with an astounding number of do-it-yourself business plans that served to weather the economic storms of the era. Military salvage work, repurposing discarded wooden pallets for firewood, and crafting homemade candle holders to sell were just some of the creative ways the Frederick family stayed afloat during the lean years of the 1930s and ‘40s.

After graduating from Arlington High School in 1949, Les enlisted in the Navy and enjoyed an uneventful stateside deployment in New Jersey during the Korean conflict. Despite having never been stationed on an actual ship, Les would for many years afterwards, don his black leather captain’s hat in civilian life, and regale any within earshot with stories of his naval adventures. Predictably, as a Photographer’s Mate 2nd Class, these “war-stories” were largely leisure-oriented in nature: Operating film projectors on movie night, conducting routine photo-ops, delivering payroll, and even procuring liquid refreshments for companies of Marines on shore-leave.

After an honorable discharge in 1953, Les took advantage of his G.I. benefits to further a career in photography. Enrolling in the Rochester Institute of Technology during an era when the both the art and technology of photo representation were undergoing rapid growth, Les was fortunate to find himself at the geographical epicenter of a modern movement. Famous names that frequented R.I.T. at this time included Minor White, Bruce Davidson, and Ansel Adams. The college was also conveniently located in close proximity to the emerging Eastman Kodak Co.; a mutual benefit that helped foster increased development of the art form.

But perhaps Les’s most important academic exposure during his time at R.I.T. was to his future wife, Joanne Catherine Taylor of Newtown, Pa., herself also an accomplished photographer and gifted student of film technology. Upon his graduation in 1959 with a bachelor’s degree in fine arts, Les and Joanne were engaged, and married. Together they embarked on a shared partnership in life and in the photographic industry, which led to the pair establishing two well-renowned professional photo-finishing labs in the greater Boston Area: ReproTech and Northeast Color Research, both in Somerville, Mass. Being well-versed in new and emerging film techniques such as color processing enabled Les and Joanne to work with and retain significant corporate clients in the area such as Polaroid and General Electric.

Les and Joanne would go on to raise a family of two children, Rebecca and Jonathan, and reside in Arlington for many years until the untimely death of Joanne in 1991 from breast cancer. Les was suddenly alone, his adult children having recently graduated from college and relocated, but fortunately Joanne’s dying wish that he should seek to re-marry after her passing soon became a reality after Les reconnected with an old childhood friend.

Ever since he was a child, Les had always summered on the shores of Lake Winnipesaukee in New Hampshire. It was during his early teen years on the lake, that he formed a strong bond with Barbara Jane Knox, of Medford, Mass. Barbara and Les had always remained in touch during their individual lifelong journeys, and at long last, fate brought the childhood sweethearts together once again.

Barbara and Les were married in a small ceremony on the very New Hampshire lakeshore where they had once played as children, and together the newlyweds relocated to Midcoast Maine to live out their retirement years as a loving couple. Children from each of their previous marriages would frequent their beautiful Maine home often, which would always prompt Les to comment about how fortunate he was to have experienced such joy and fulfillment throughout all the seasons of his life. A small black cat adopted at this time was named appropriately enough “Lucky.”

Among Les’s numerous accomplishments are his status as a 32nd degree Mason and Past Master of Russell Lodge in Arlington, Mass. He also continued his lifelong devotion to the art of photography by undertaking numerous trips to scenic destinations in the Southwestern U.S., Europe, and the Canadian Rockies, always with the intent of capturing stunning images. The resulting color photos, lovingly printed and framed on photographic paper in Les’s personal darkroom, have always adorned the walls of his home, as well as the homemade greeting cards he displayed at local craft fairs. It is also worth noting here that Les may have possessed one of the all-time classiest New England accents this side of a Boston Brahmin or an elder Kennedy Compound resident. Because of this, listening to him relate a familiar story was never boring.

The simplest pleasures in life brought great joy to C. Leslie Frederick. He loved a quiet evening at the lake, surrounded by friends and family, listening intently to distant loon calls charting the slow passage of summer months, always with a purring cat in his lap and a glass of crisp chardonnay in hand. His gentle spirit will continue to live on in everyone he touched with his one-of-a-kind warm smile and steady, easy-going nature. He will be missed by all.

Les is survived by his wife, Barbara Jane Frederick; his children, Rebecca, and Jonathan; his grandchildren, Rachel Chasteen, and Mikaela Frederick; and his step-children, John Reed, Mark Reed, and Jennifer Decker.