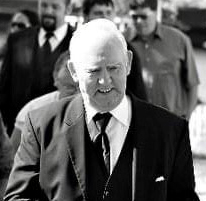 Sonny was raised in Warren and attended local schools. He graduated from Warren High School in 1959, married Florence Elliot (Flossie) and enlisted in the Army in 1960 and was sent and stationed overseas in Germany as an MP. He returned stateside and finished his military service, receiving an honorable discharge in May of 1963.

Sonny enjoyed working with his hands and worked for Pratt & Whitney in Connecticut in the ’60s, returned to Maine in the early ’70s and went to work at Maine Coast Railroad until his retirement.

In the late ’80s and into the ’90s, he and Flossie operated Flo’s Diner on Route 1 in Waldoboro. Not one to sit idle, Sonny also drove trucks for N.C. Hunt and then George Hall Construction.

The past few years Sonny enjoyed watching “Bonanza” and “Gunsmoke,” going to lawn sales, and frequented Wasses for his all-time favorite: hot dogs.

A graveside service will be held for Sonny and he will be laid to rest alongside Flossie at Resthaven Cemetery in the spring.

Donations may be made in Sonny’s name to a hospice of your choice.