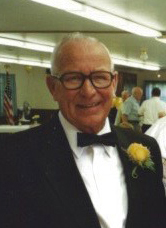 Following the war, he was employed by the State of Maine Motor Vehicle Division in Drivers Licensing, transferring to the field of Motor Vehicle Investigations from which he retired in 1976 due to a heart condition.

Predeceased by son, Donald Clyde Campbell in 2011, he is survived by his wife of 69 years, Ada (Smalley) Campbell; daughter-in-law, Robyn R. Campbell, both of Waldoboro; granddaughter, Elizabeth Renee, serving in the Navy in Norfolk, Va.; and several nieces and nephews.

In accordance with his wishes, there will be no visiting hours or funeral service.

Memorial donations may be made to the Waldoboro Ambulance Service, Waldoboro, or the charity of one’s choice.