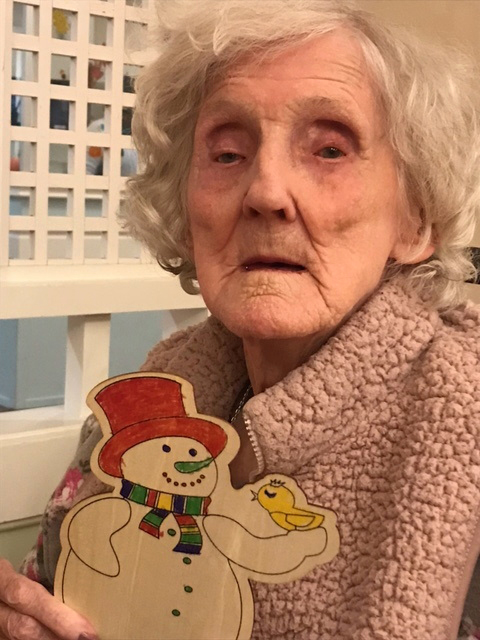 Dagmar Ingeborg Robbins passed away peacefully, Dec. 19, 2021, at Cove’s Edge in Damariscotta. Her son Wilho was at her side, the snow was softly falling, and her Christmas tree was glowing in the room.

Born at home in St. George, Aug. 2, 1926, she was the oldest child of Bjarne and Ina Korpinen Peterson. Dagmar spoke five languages. She graduated valedictorian of her class.

Dagmar married Benjamin Knight and was blessed with her eldest son Gerald Jon Knight. She was widowed in 1953.

Dagmar worked in a sewing factory and in the seafood industry, but her lifelong dream was to be a mother. She married Wellington Robbins in 1955. They made a home in Thomaston, where they raised their four children and their brother, Jerry. She was widowed yet again in 1986.

Singing, sewing, baking, cooking, drawing, making up songs, playing games and telling stories to entertain her children were some of her many talents. She was intelligent, hardworking, loving, kind, and talented. She loved her family.

She endured much heartbreak, but she never gave up. She taught her children to be honest, kind, hardworking, and that family comes first. Dagmar went home to be with her Savior and was reunited with family and friends. Dagmar was predeceased by her son, Jerry; grandson, Douglas; great-granddaughter, Autumn; brother, Bruno Peterson; and sister, Lily Beckett. She leaves behind her beloved children, two daughters, Ina Shaw and her husband, Bryan, of Rockland, Thelma Hannan and spouse, Michael, of Warren; two sons, Wilho Robbins and partner, Bethany Johnson, of Warren, and Milton Robbins and spouse, Christy, of Warren; grandchildren, Robbie, Karen, Corey, Brady, Mikayla, Cameron, Samantha, and Madison; seven great-grandchildren; her dear sisters, Ragna Weaver and spouse, Clifton, Clara Reed, Astrid Weaver, Ingrid O’Brien and spouse, Peter; many nieces and nephews; other friends and loved ones; as well as extended family at Cove’s Edge, and special friends, Mary and Pat.

A graveside service will be announced in the spring.

To share a memory or story with Dagmar’s family, please visit their online Book of Memories at bchfh.com. Arrangements are in the care of Burpee, Carpenter & Hutchins Funeral Home, Rockland.