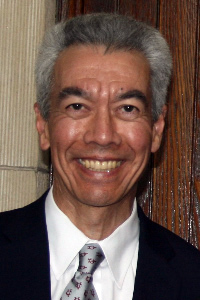 Dana K. Martin, aged 62, of Needham, Mass., and Pemaquid, passed away peacefully, surrounded by his loving family on Aug. 6, 2022, due to complications from gastric cancer.

Born in Seattle, Wash. to Mariko and Keith Martin, Dana was a 1982 graduate of Yale College, where he majored in East Asian Studies with a concentration in economics, and sang bass with the Alley Cats and Whiffenpoofs. After working in commercial banking in New York City at American Express International Bank, Dana attended the Lauder Institute’s combined MBA/MA program at Wharton Business School, where he met his wife, fellow classmate Alison (Ogg).

Dana had an intense work ethic, the product of losing his own father at a young age, but he always made time for family and friends. He was very proud of his two children, Emily and Andrew, rarely missing a dance recital or athletic event. He lived life to the fullest. Among his many hobbies were race car driving, heli-skiing, sculling, and marksmanship.

He was a collector of fine wines and antique pens, and a generous donor to numerous organizations. Closest to his heart was his dedicated stewardship of The Stone Trust Corporation, a non-profit affiliated with Yale College.

Dana is survived by Alison, his devoted wife of 34 years; and beloved children, Emily Martin, of Boston, and Andrew Martin, of New York, N.Y.; his mother, Mariko Averette and stepfather, Henry Averette, of Honolulu, Hawaii; brother, Brian Martin and his wife, Isabel, of Tyler, Texas; brother, Kevin Martin and his wife, Carolyn Shigetomi, of Seattle, Wash.; niece, Breanna Roof and her husband, McNeal, of Norfolk, Va.; and sister-in-law, Melissa Ogg of Attleboro, Mass. He is predeceased by his father, Keith Martin.