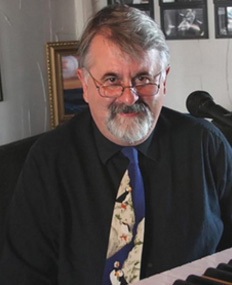 Daniel “Danny” Wayne Beal, also known as The Music Man, of Boothbay Harbor, passed away unexpectedly in Kansas City, Mo. on Jan. 25. He was born to Barbara Beal Edmonds on July 14, 1954.

He graduated from Jonesport-Beals High School in 1972 and attended the University of Maine at Machias and Bowdoin College.

Danny was well known for his creative musical talents, which included playing the piano with great gusto, writing his own amazing songs and singing with an incredible voice that touched all hearts. He played in bands, on cruise lines, for the Moosabec Summerfest, for nursing homes, and at many churches, where he worshipped the Lord.

Danny enjoyed every aspect of life, especially golf, and he spent many happy hours on the greens. He also had a crazy, comical sense of humor; his wit was beyond measure.

He was born and raised in Jonesport, but his other home was Boothbay Harbor, where he entertained countless people at the Tugboat Inn over the years. He would spend summers in Boothbay but also lived in Kansas City, Mo., where his beloved sons reside. He was always on the move, always telling a joke, and always making the music he loved. The Music Man will be greatly missed by so many.

Danny was predeceased by loving grandparents, Clarence and Edith Beal.

He is survived by his precious sons, Joshua Beal, and Gordon Beal of Kansas City, Mo.; their mother, Molly; mother, Barbara Edmonds of Jonesport; sisters, JoAnn Carver and husband Walter (a dear friend, as well as family) of Jonesport, Gale Blackwood of Holden, and Donna Alley and husband Skip of Beals; brother, Jeffery Edmonds of Jonesport; Papa and Mama Carver (Richard and Pat); several nieces, nephews, cousins, and very special aunts and uncles who were more like brothers and sisters; and many close, life-long friends, Mark Stover, Robert Chesterton, Sam Dunning, George Mugnai, Stevie Carver, and too many others to list.

There will be memorial services in Kansas City, Mo., Jonesport, and Boothbay Harbor; dates to be determined.