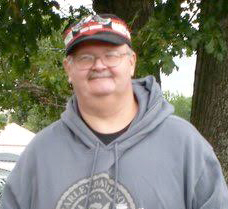 Darrell L. Merrifield, 53, of Waldoboro, died Nov. 3 at Maine Medical Center in Portland. He was born Aug. 10, 1963 in Augusta to Lyman and Hester Merrifield. He grew up in Jefferson, and graduated from Erskine Academy in the class of 1981.

He worked as an electrician for Roland Choate in Gardiner, and later at Bath Iron Works. He later worked for the Lincoln County Jail in Wiscasset. He lastly worked as a corrections officer at the Maine State Prison until he retired in 2009. He was a member of the Riverside Masonic Lodge #135 and Lakeview O.E.S. Chapter #179 in Jefferson, and the United Baptist Church in South Jefferson. He was an active member of the Central Maine Defenders Motorcycle Group, and was known as, “Shank,” in the club.

He enjoyed spending time with his grandson, Issac. He also enjoyed camping, riding his motorcycle, going to casinos, watching T.V., and spoiling his dog, Max. Darrell was a kind, compassionate and talkative person who would assist anyone who needed help.

He was predeceased by his grandmother, Laura Parlin.