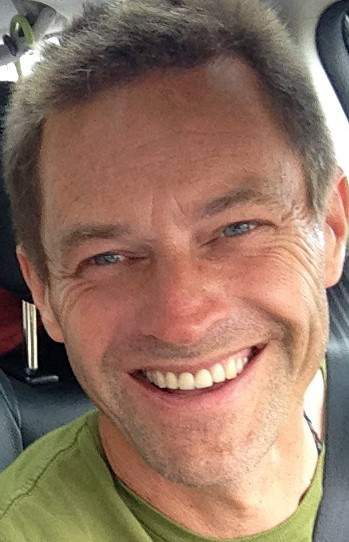 David Andrew Vieten’s way of seeing the world impacted many – through the art he created, the relationships he cultivated, and the passions he shared. David was born on Aug. 9, 1966, in Redlands, Calif., to his mom, Jean Winifred Vieten and his dad, Donald (Pat) Vieten. David grew up in Redlands with his sister, Carol, and brother, Richard, where he loved to explore the local canyons and orange groves. At the age of nine, he began spending summers in the red earth of New Mexico at Ghost Ranch, cultivating his deep connection to the natural world. David’s life was full – with work and school, with family and friends, with artistic endeavors and spiritual explorations. Through his life he learned how to navigate the dark. He was comfortable and found deep beauty there which grew his capacity to savor life’s gifts. This orientation to the world, in combination with how deeply he sensed things – from taste, to joy, to pain – allowed him to be a compassionate and trustworthy friend, father, partner, teacher and guide.

Wherever David went he shared his gifts of creativity, non-judgmental listening and gentle strength – always pursuing his passions for deep relationship, film, music, horizon, good steak, and coffee. After graduating from Redlands High School, David managed a theater in Hollywood. He loved the vibrant film-centered life there, but left after a few years feeling drawn to a tighter knit community. He soon married Cassandra Luben and moved to the San Francisco Bay where David finished a bachelor of arts degree at Academy of Art University and built his first home, a two-story floating home at the end of the pier in Sausalito. Having realized his ability to express his artistic vision through building, he opened his company, “Form and Rhythm Construction and Design,” which he ran for 20 years. David and Cassi had their daughter, Indigo Loraine Vieten in 2001, bringing light, inspiration and very blue eyes into the world!

Growing the seeds planted in Redland’s back canyons, David began exploring wilderness rites of passage work in the early 2000s. He found nourishment, healing and inspiration as he participated and guided these experiences. He guided sacred quests for people of all ages in the Ventana Wilderness, the Eastern Sierra, the red earth of New Mexico, and eventually on the coast of Maine. David’s capacity to see and feel deeply manifested as he held space for many to live more fully into themselves and who they hoped to be in the world.

Soon after David and Cassi decided to go their separate ways, David met Julie Barnes through a sacred quest guiding apprenticeship. Over time, David and Julie’s friendship evolved into a life partnership, grounded in their connection to the natural world and their commitment to supporting themselves and others in opening to healing through encounter with the natural world. They were married at Casa Del Sol, Ghost Ranch’s contemplative retreat center, on June 14, 2015.

In the coming years, David, Julie, and Indigo welcomed two new daughters to their family, Finley Jean (2016) and Ruah James (2019) Barnes-Vieten. David was a consistent and loving father to each of his daughters and was filled with intention and silliness as a dad. He passed on his passion for film and music, and shared experiences in the natural world with them that will bond them together for the rest of their lives. In 2019, David and Julie decided to start a new life for themselves in Maine so David could pursue his passion for film through an MFA program at Hollins University, and they could raise their family living close to the land in the context of intentional community at the Chewonki Foundation where Julie serves as dean of students.

David was diagnosed with stage-four renal cancer in the spring of 2020, and lived with vengeance from that time forward, working with every doctor, naturopath, and healer he could find to live a full life for as long as he could. David’s body died on Jan. 18, 2022, with Julie and Indigo by his side, reminding him of how loved he is.

In the last three years, David learned to fat tire bike when there was snow, and to ride on the rocks and roots when there wasn’t. He built a hugelkultur garden and learned to grow hops. He continued to love and support his three daughters and Julie, and excelled in his MFA program. He taught classes, engaged in meaningful community, and completed a feature-length screenplay – a horror film about a man’s walk with cancer. He created a remarkable last living chapter and while it ended far too soon, we are in awe of the gifts he poured out in that time, and throughout his life.

David was a profoundly caring, passionate, and loving human. He lived and loved in his body, enjoying every ounce of life it had to offer him. Now we believe he is well freed from it and imagine his spirit soaring from coast to coast, visiting the landscapes and communities he loves, through the rainbow cliffs of New Mexico, across the Sierra, around the coast of Maine, over to the baths in Japan and up to explore the moon, stars and that galaxy far far away… We miss his body immensely, and are grateful for the deep and unending connection we have to his spirit, today and every day.

If you would like to honor David’s life through story or image, please share those at openingtolovefordavid@gmail.com Julie will compile contributions in books for their daughters.

If you would like to honor David with a monetary donation please consider contributing to a college savings account for Finley and Ruah. To contribute go to Ugift529.com and enter the girls’ U-Gift Code: T1A-F8N.

and/or “The David Vieten Memorial Fund,” a donor-advised fund we will use to support film-centered programming at Ghost Ranch and Hollins University. For more information, on how to make a tax deductible donation contact Julie openingtolovefordavid@gmail.com.