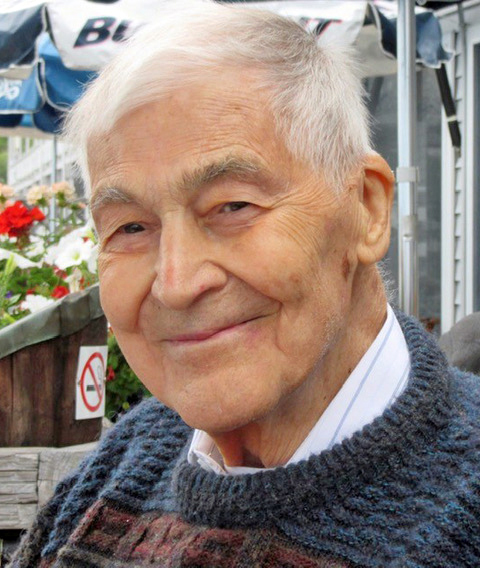 David Owen Van Strien, 103, died on Nov. 22, 2020 at the Sussman House in Rockland. He was born on June 24, 1917 in Grand Rapids, Mich. to Abraham and Esther Van Strien. Grand Rapids is where he grew up and is where he met and married Eva Grice, his adored wife of 71 years.

David earned degrees in civil engineering from the University of Michigan and Michigan State University. He had a long and varied career in engineering as both a professor and in industry. His first engineering job was as a railroad engineer, what he considered his “first love,” but he also designed military planes during World War II at Glen Martin Aircraft Co. in Baltimore and worked for Ford Motor Corp.

David taught civil engineering at Michigan State and Denver University before becoming a professor in the Civil Engineering Department at the University of Utah in Salt Lake City, where he was a well-loved teacher and respected researcher. Never one to be idle, David spent his summers working at different engineering firms as a designer and consultant.

His sabbatical in 1967 brought him to Poona, India, where he worked with the Engineering College. Eva and younger daughter Bonnie accompanied him and after their year in India, the Van Striens traveled extensively. When David retired, he and Eva spent time traveling, visiting family in the U.S. and many countries across the globe.

His deep love for Maine, borne out of childhood visits to Togus Pond with his uncles, deepened as he and Eva vacationed in Midcoast Maine after retirement. Eventually they settled at Pemaquid Point, where they lived until Eva’s death in 2013. For the next few years, with the support of daughter Sally, David was able to live independently in Boothbay and Damariscotta, visiting the “cabin” for Sunday dinners until his age made those visits too difficult.

He was a longtime member of Wasatch Presbyterian Church in Salt Lake City.

David loved animals and nature and spent hours working outdoors. In his last years, he was less active, but he enjoyed hearing about others’ activities and adventures. He had a beautiful smile and a wonderful laugh. Talking about his grandchildren and great-grandchildren and getting to meet and interact with any dog, goat, llama, or other animal brought joy to his eyes. Everyone who knew David enjoyed his company, delighted in his stories (real-life history), and usually learned something interesting.

David’s active mind and dedication to learning kept his mind sharp. He had great admiration for the teachings of Gandhi and considered lifelong learning, working at what you love and doing your best in both, to be the foundations of a happy life. His copy of Gandhi’s autobiography was never far from reach. “Live as if you were to die tomorrow, learn as if you were to live forever.” — Gandhi

David will be deeply missed by all who knew him. He will be laid to rest with his wife Eva at a later date. If you wish to contribute a memorial gift in David’s name, please consider Apifera Farm, 315 Waldoboro Road, Bremen, ME 04551-3305, apiferafarm.blogspot.com. The animals at Apifera Farm brought such joy to his last years.

Arrangements are under the direction of Strong-Hancock Funeral Home, 612 Main St., Damariscotta. Condolences, and messages for his family, may be expressed by visiting stronghancock.com.